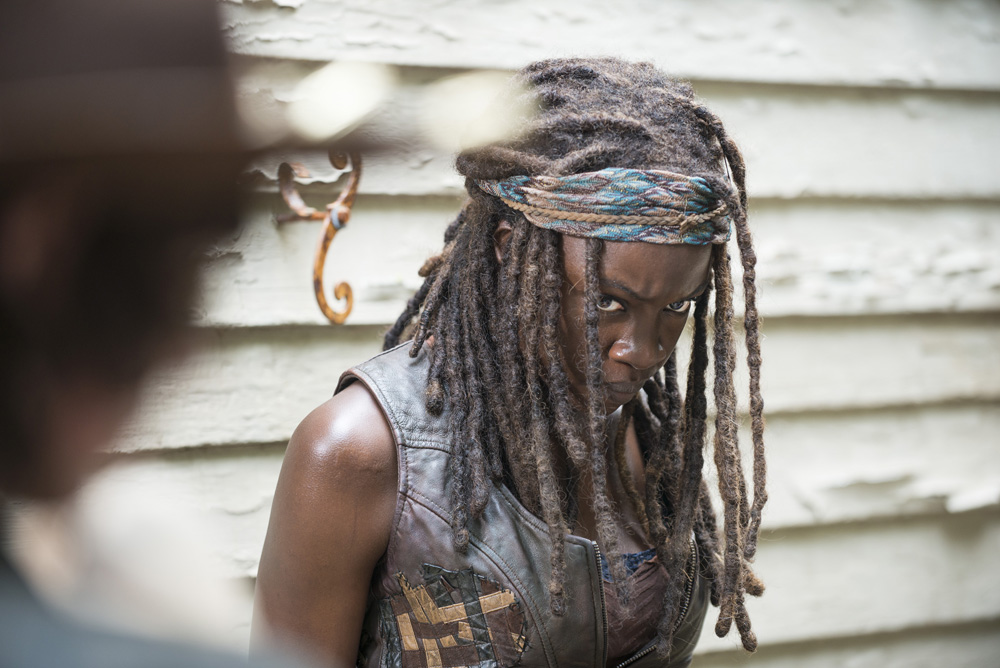 Last night’s mid-season finale episode of The Walking Dead, “Coda,” left us with a lot to chew over while we wait for the show to come back Feb. 8. We’ve put together the moments that had the biggest impact on us, vote in the poll above and tell us which most affected you!

Beth’s death scene was certainly shocking and one of the biggest main character deaths the show has thrown at us in a while. Let me address the corpse of a fictional character directly here:

Beth, dear, why’d you have to go out like that? Everyone you know, plus a few people you don’t, risked their lives to mount a daring rescue operation to save you and Carol. And it went almost according to plan, until you decided to stab Dawn with some tiny scissors and get shot.

What was going through your mind? Did you really think that little thing would kill Dawn, or did you just want to get a bit of petty revenge assuming she wouldn’t fight back with all those guns on her? Did you do it to save Noah? Because although that happened, that certainly wasn’t the most likely outcome of your actions. Or is it something darker, did you just decide you couldn’t take it anymore? Did you give up?

Father Gabriel really must have some higher power looking out for him, because it was a miracle he survived his ill-advised trip to check out Bob’s maggoty leg. For a moment it seemed like he was too interested in random stuff around the camp to even see it. At least finding the evidence has convinced Father Gabriel that Carl and Michonne were telling the truth, and he even showed a bit of bravery when he held the door to his office so those two could escape first with Judith.

Maggie Remembers She Has a Sister

I have had great fun picking on Maggie this season for never mentioning Beth, but the genuine emotion Lauren Cohan showed when the topic of Beth came up made me feel like a heel. Maggie’s happiness and relief was only a quick fire engine ride away from the depths of despair. Yes, it could be argued it felt tacked on and last minute, but at least is was finally there.

Although Rick was willing to play along with Tyreese’s less brutal plan to save Beth and Carol, he wasn’t willing to forgive anyone who attacked one of his people or jeopardized that plan. Bob Lamson’s smackdown on Sasha and escape attempt earned him an appointment with the bumper of a police cruiser, a recreation of one of the most hardboiled scenes from the comic books. As Lamson lay dying in the street Rick showed little interest in mercy, refusing to take Lamson to the hospital or listen to his pleas. Instead, he shot him in the head and told him to shut up.

In his ongoing attempts to cheer up his sister, Tyreese finally admitted to Sasha that he could have killed Martin, a cannibal who was quite willing to smother a baby, but did not. Sasha was polite enough not to point out that Martin helped give the Hunters numbers enough to capture and partially eat her lover Bob. It did lead to a nice moment between the two where Sasha acknowledged that Tyreese’s attempt to hold onto his humanity is a good thing, even if she can’t do so herself.

It was an understated moment, but seeing Carol start to move in the background of one of Dawn and Beth’s conversations was a big deal to those of us who thought we’d lose them both. Carol didn’t have much else to do in this episode, but she was able to comfort Daryl after Beth died.

It’s a quick end-credits teaser with Morgan acting like he’s still a little bit crazy, but finding Abraham’s apology map puts him on the trail for a possible reunion with Rick in the second half of the season.

Got another moment you think was great? Post it in the comments or on our forums.

Sneak Peeks and Previews for the Mid-Season Finale, ‘Coda’

The Walking Dead Pool Mid-Season Finale: Who Will Die? (Poll)