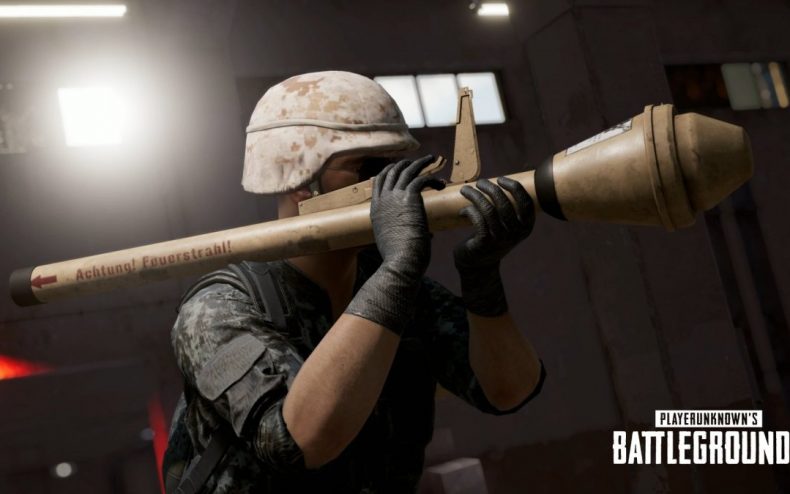 What did PUBG Corp just add to the game with Update 6.3? How about one gigantic German launcher?

There are other additions and changes in 6.3, but it’s the Panzefaust that will grab most of the attention. This thing delivers as much damage as it looks like it can, but there are a few tradeoffs for all that firepower. It will take up a primary weapon slot, it has quite a backblast that could potentially harm teammates, and PUBG says it’s fairly easy to dodge if your opponent is paying attention. You can only get the launcher in Karakin and it is uncommon to find, though it’s guaranteed to be somewhere.

They say this is the last major update of Season 6, so there could be bigger changes on the horizon. The patch is live now on PC, Playstation 4 and XBox One.

PUBG’s full patch notes can be read below.

Dev Note: Due to community feedback, we’re changing some of our initial plans. The M249 will be available on ALL maps as uncommon ground loot, as will the DBS which has also been removed from Care Packages.

Alongside these balance changes, the M249 and Tommy Gun models and firing sounds have been updated.

Dev Note: After the 5.2 update last of ‘Console QOL: 1st Controller improvement’, we’ve received feedback to apply this on PresetA as well. Here we brought into Preset A! Thank you for using well of our updated features and hope this deployment provides enjoyable play experience.

Dev Note: We have extended the Survivor Pass end date by three days due to the previous mission unlocking issue.

Apex Legends’ Peacekeeper Will Be Getting Another Nerf Soon

Fortnite Season 11 Delayed By One Week
Be the first to comment!
Leave a reply »