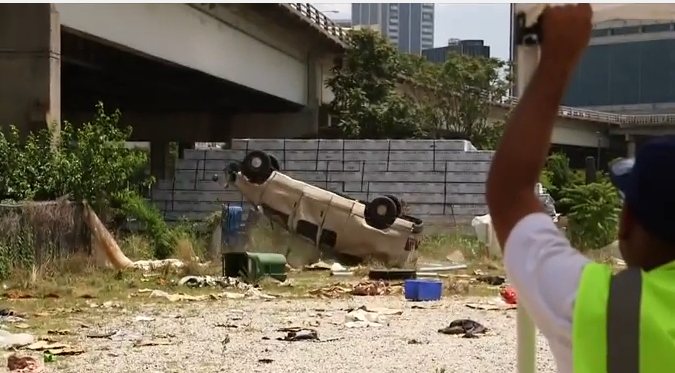 Consumed was an excellent, suspenseful, melancholy hour of television. But there was one moment that required suspension of disbelief that almost took some fans out of it. And it wasn’t the part where the dead rise and walk around.

What set heads shaking and tongues wagging on our forums and elsewhere was Daryl and Carol’s unusually survivable van drop. Specifically how the van seems to do a full flip in the air and land on its wheels like a cat lands on its feet.

There’s no need to argue about what would really happen. Because The Walking Dead Crew really did drop the van off the bridge to see what would happen.

As you can see in the 2 minute 30 mark of the video above, despite trying to rig the shot with heavy weights in the back end, the van tilts forward and only has time to do a half flip and lands on its top with a Daryl and Carol squishing thud. They drop a second van straight down from a cable to get the rest of the shot.

So in defense of the creators, they knew what the physics were. But they also knew what was more important in that scene was a moment moved Carol’s deepening trust in Daryl forward, to prime the well for the outpouring of emotional confessions that come later. If you want great physics I suppose you’ll have to find a show that doesn’t have corpses that can walk around for years without taking in any energy.