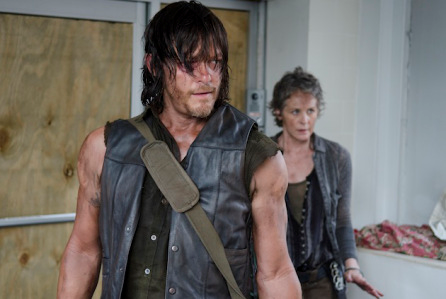 A lot of digital ink has been spilled since The Walking Dead Creator Robert Kirkman recently hinted that Daryl Dixon, everyone’s favorite redneck, might be gay.

In fact it has been revealed that original show-runner Frank Darabont had a plan to make Daryl gay. But as it stands now, Kirkman revealed on last night’s Talking Dead wrap up show, Daryl is officially straight.

“We’ve played Daryl Dixon as being somewhat asexual on the show. He is a very introverted character and I think that’s some of his appeal,” Kirkman said. “I do have to clear something up, though. In the letter column of the comic book that I do, I mentioned that there was a possibility early on about making Daryl Dixon’s character gay. It caused quite a hubbub online and I just wanted tom a make it clear that I was saying thee possibility is there and that I would have been fine with it, the network would have been fine with it, but we ultimately didn’t do that. I can make it official, Daryl Dixon is actually straight.”

Kirkman, however, said we are getting “a very prominent gay character from the comics,” in addition to Tara, in the second half of this season. Begin speculating that is it fan favorite badass Paul Monroe, also known as Jesus, now. Although it is a bit more likely the character will be Aaron. We won’t get into why because it probably spoils upcoming episodes of the show.

All right, now that we know for sure, no more bunk beds for Carol and Daryl, please.

Is Daryl Gay? We Won’t Find Out in Season Five
Be the first to comment!
Leave a reply »