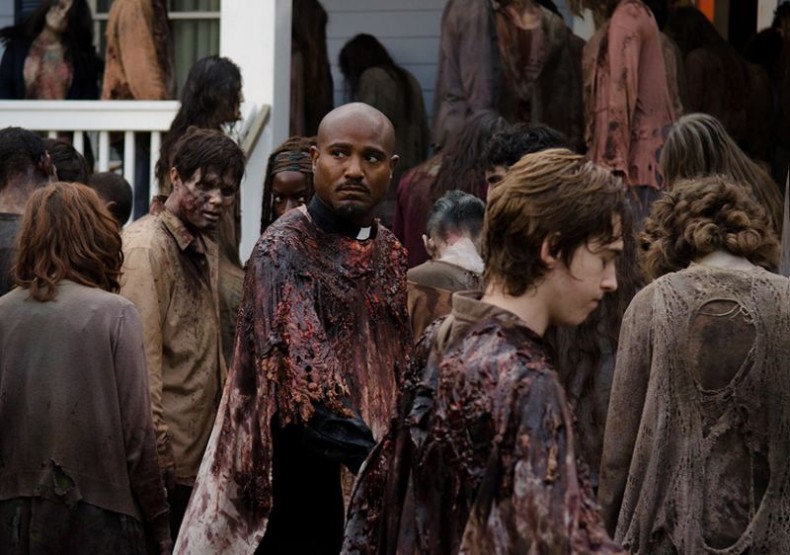 There’s a new interview with TWD showrunner Scott Gimple on Yahoo TV, in which he discusses key scenes from the midseason finale, the evolution of certain characters, and what awaits in the second half that starts February 14. Here are the most interesting parts from that conversation….

(If you haven’t watched the episode yet, the snips from this interview contain spoilers.)

The Negan that’s about to appear in the show is very close to the Negan from the comics “There is no reinvention of Negan going on for the show. He’s all of those things… charismatic, brutal, smart, ferocious, very frightening, hilarious, inappropriate, sort of weirdly friendly, fun-loving. He’s a strategist, he’s id… we’re trying to do the Negan from the comics. There’s always changes and things get to be flesh and blood, but I’m hoping that people see the Negan in the comics when they see the Negan onscreen.”

Deanna’s death scene was ad-libbed “That scream that she did was improvised. Mike Satrazemis, who directed the episode, was like, “You’ve got to check this out,” and I was like, “Holy crap, that’s awesome!” She’s screaming in the face of this world. That, in some ways, just that performance, that moment, seeing it play out there, with that amazing score at that moment… it made it easier. I thought it was one of the more badass deaths you would see on a show, and that it was Deanna? That made me really proud of all the work those folks had done. The hand-off between that and Bear [McCreary’s] amazing score, just the way it was shot and everything, I was really, really thrilled with it.

It’s not that Carol wants to kill, she just has to “I think it’s interesting that it seems this killing isn’t weighing upon Carol. It is. At the end of “JSS,” she was sitting on the stoop crying. She was trying to get away from [Rick’s] group in [Season 5’s “Strangers”], because she didn’t want to have to keep killing. She loves these people, and she’ll always do it for these people. There’s a lot that she and Morgan have in common, and there’s a lot they need to talk about. This situation did not allow that. Not at all.”

The next eight episodes will be “very different” from the previous episodes, and may even include a comedy episode (somehow) “There’s one episode where the tone is almost completely different than any episode we’ve ever done. There’s an episode that has, and I know how scary this sounds, one of the lightest tones we’ve ever done. Dare I say it’s funny? I know, considering where we just left off, that’s kind of a tall order. The plot kind of takes over for a little while, which is something different than we’ve pushed before. I want these chapters to be very different from one another. Not as many smaller-roster episodes… more episodes with more characters together. Things really build and build and build and, of course, get very intense. We definitely go to some interesting, very strange places for the show. I can’t wait, either. A lot of people say, “Ah, man, why are you making me wait until Valentines Day?!” I don’t want to wait, either. We’ll get through it together.”

This “funny” episode might be the Daryl/Rick teamup episode Scott mentions a bit later “It comes early on. It’s a little “Butch and Sundance.” It’s a deceptively fun episode that actually has huge repercussions on the greater story. Norman and Andy are very funny in it. In moments, they are very, very funny. Very scary in some moments, but I really loved what they did.”