Scott Ian From Anthrax Will Be A Zombie in Season 2 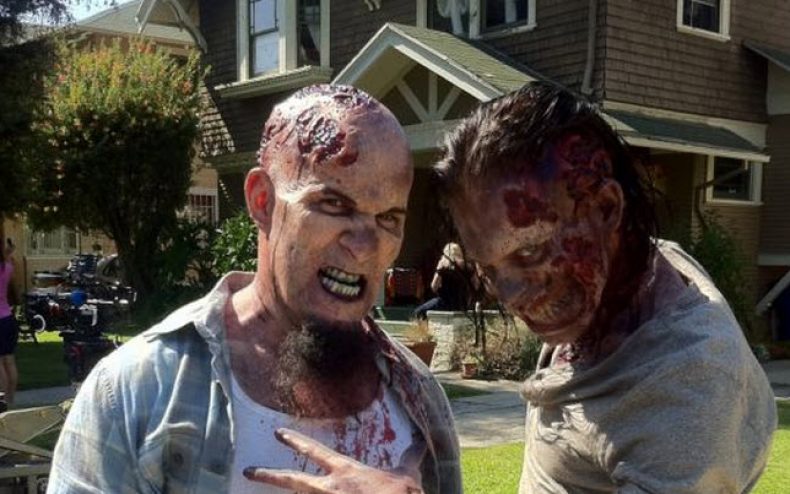 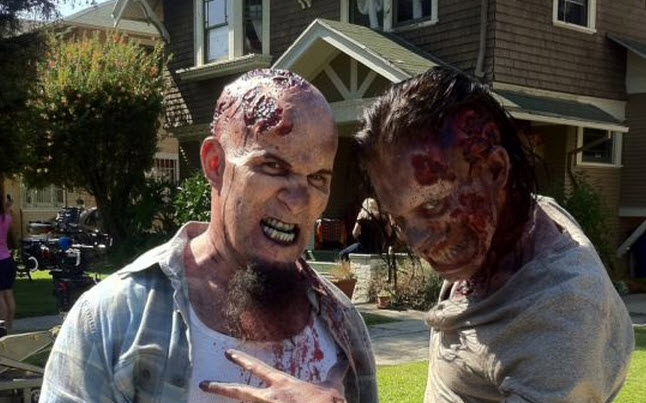 Scott Ian the guartarist from the band Anthrax will be making an appearance in season 2 of The Walking Dead, and he will be zombiefied. He was on set of the making of the second season and there are some recently released photos showing Scott all decked out as a zombie. According to Scott Ian’s blog, this is something that he has been wanting to do for a very very long time.

“My agent got the call asking if I wanted to come down and get made up to play a zombie in a webisode for The Walking Dead. I couldn’t say yes to this fast enough.”

“Like I said in my tweet, I’ve been wanting to do this my whole life. Zombies have always been my favorite genre of horror and to participate in something as killer as The Walking Dead would just be amazing.”

Also according to Dread Central, Scott promised there would be more to come and that fans can expect to see more of him.

The weirdest part of dressing up as a zombie for the television show was the contacts which Scott mentions on his blog.

“The only weird part was putting in the contacts. I’ve never had contacts in ever, I can barely put drops in my eyes. The lens specialist put me right at ease and directed me each step of the way, “look up, look left, blink” etc and they were in and it was like looking through the eyes of the dead. Well, it was kind of cloudy anyway.”

Scott Ian went on to say that he had to walk like a zombie so it would be convincing, but that seemed to come almost natural for him.

“Next was making sure I could convincingly walk like a corpse. I just did what felt natural, started with a broken ankle which would cause me to lean, let my arm swing like dead weight, head forward, blackened teeth (Black Tooth!) gnashing. I showed my walk to zombie pro Joe (didn’t get his last name) and he approved. He said I looked dead! No walking notes.”

Having Scott Ian from Anthax on the set must not only have been cool, but it should be pretty awesome when he finally makes his appearance on the show. While there is no word out yet on what episode he will show up in, we do know that fans will keep their eyes peeled for one of the most beloved guitarists out there.  If you want to see more pictures of Scott Ian dressed up as a zombie, visit his blog and check them all out.

A big fan of The Walking Dead television series. In my spare time I enjoy blogging and simply hanging out. Oh and lets not forget, Go NY Giants!
You might also like
PicturesSeason 2

Daryl Is In Serious Trouble in Season Five