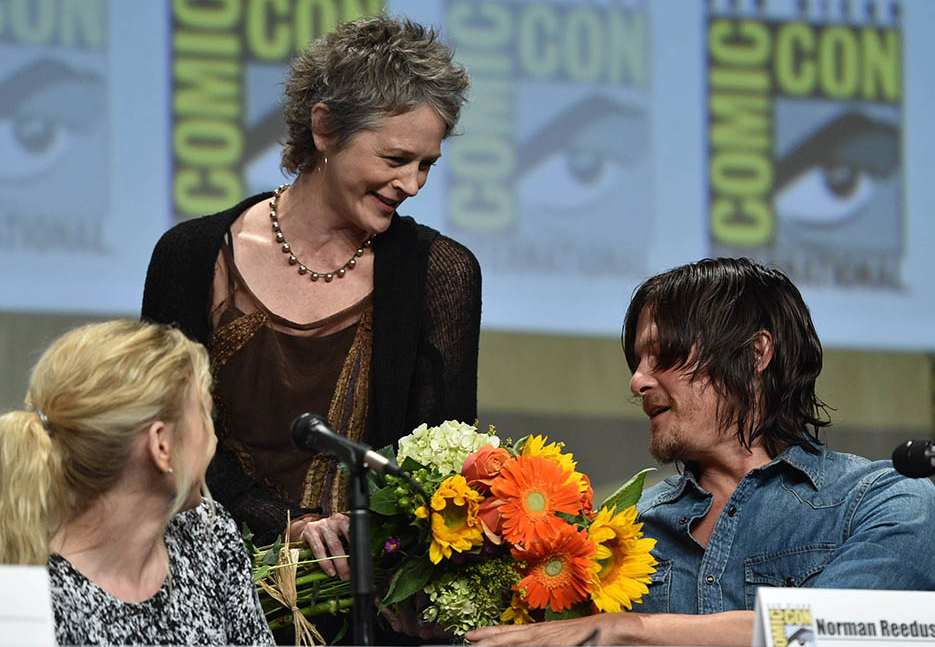 The Walking Dead cast and producers previewed season five at Comic-Con International in San Diego on Friday. We’ve already shown you the almost unbearably action-packed trailer, but here’s your chance to check out the panel where the trailer and other details about season five were revealed. A few bits of info and lots of laughs with the cast and the producers.

• Show-runner Scott Gimple said this season will define the characters, and also promised that the story of Terminus and how it came to be will be told.

• Walking Dead Creator Robert Kirkman said that although there will be differences, the show will deal with comic book events in season five.

“This is probably a season that will be pretty close to the comics at the end of the day,” Kirkman said, promising that the show would get to some cool stuff from the comics that people are excited about seeing.

• The Blu-Ray of The Walking Dead season four finale will include a version of Rick’s “They’re screwing with the wrong people” line where Rick will used the F-word as he did in the comic books.

• Disgusting water-logged walkers will make an appearance in an upcoming episode.

“It was great being reigned in by Hershel, but there’s something about getting my gun back and my shoes on and getting sweaty and dirty and bloody that feels right,” Lincoln said.

• Panel moderator Chris Hardwick gave Melissa McBride a bouquet of flowers, which she tried unsuccessfully to give to other cast members before Norman Reedus took them.

“I think the great thing about Carol is she is kind of prepared to do anything,” McBride said, referring to Carol’s growth as a character and the infamous death of Lizzie scene.

• Emily Kinney says she can’t say where Beth is in the trailer.

“I can tell you that she’s gotten a lot stronger,” Kinney said. Kinney said Beth has grown a lot from the death of Hershel and from teaming up with Daryl.

“She’s going to have to use everything she’s got,” she said.

• Chandler Riggs walked out to the panel with a large tub of pudding, which got a big laugh.

Riggs said he has enjoyed growing up on the show and that he has had a lot of great mentors to work with.

“I’m definitely as awkward as Daryl is, obviously. I mean what I say, I believe what I say, I trust my friends. That’s a lot like Daryl. Yeah, I’m a lot like him. We’re both cut from the same cloth, just from different parts of the world maybe,” Reedus said.

• In response to a fan question about whether we’ll see disabled walkers, showrunner Scott Gimple said there was one in episode six of season four, and that there will be many types of Walkers in the future.

• A fan asks which character death affected the actors the most, which led to this response from Andrew Lincoln.

“It’ll have to be my wife, I suppose. It was funny, I was midway through shooting, I was about on episode three or four when I called up Scott Gimple and said, ‘You know, I miss Scott Wilson, I miss Hershel so much.’ And he said ‘That’s the point,” Lincoln said.

Hardwick riffed on that line, saying “Whenever a character on the show becomes the moral compass, you’re like ‘That guy’s gonna die.’ You don’t want to be the one that’s outwardly moral on the show because that you know your number’s coming up soon.”

The Walking Dead Comic-Con Preview
Be the first to comment!
Leave a reply »