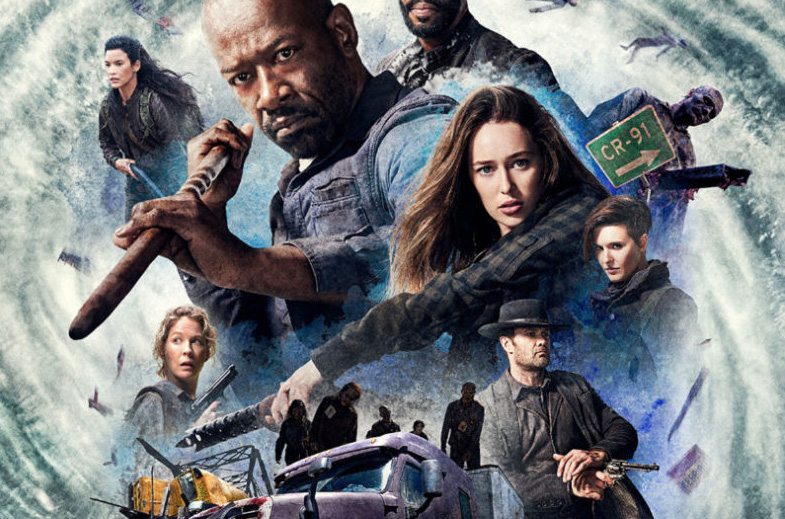 As you know, FTWD has gone through a tumultuous amount of changes in the eight episodes that have aired so far this season. Most of the original cast was written off and several new characters replaced them, played by Grace, Dillahunt and Elfman. Plus Morgan James migrated on his walking stick from TWD to its sister spinoff.

“It’s not the first show I’ve joined mid-process,” Dillahunt said, but “It’s the best introduction I’ve ever had.” Grace said her experience was “like moving into a new neighborhood….it was so warm and friendly and I will say a little shocking when we lost cast members very soon thereafter. I had no idea.”

Alicia is the sole remaining Clark, and Debnam-Carey welcomes carrying the weight of that solo role as a challenge. “It’s a been a really exciting journey for me because this character has had one of the major developments out of any character on this show,” Debnam-Carey said. “We’ve seen her go from a regular teenage girl to a fearless warrior in the apocalypse. She’s been destroyed by it and lost everyone she knows…If you thread it all together in one journey, it’s quite remarkable how much she’s changed.….What’s great though is that we now get to see Alicia now purely as her own character completely. She no longer has ties to her mother and her brother.”

Finally, Scott Gimple said future crossovers were a possibility, especially now that the timelines of TWD and FTWD have caught up with each other (though the upcoming TWD time jump could set that off-balance again). However “I wouldn’t expect it all the time. Things could happen. You never know who might pop up on Fear The Walking Dead. That includes The Walking Dead and potentially people in the past from Fear The Walking Dead.”