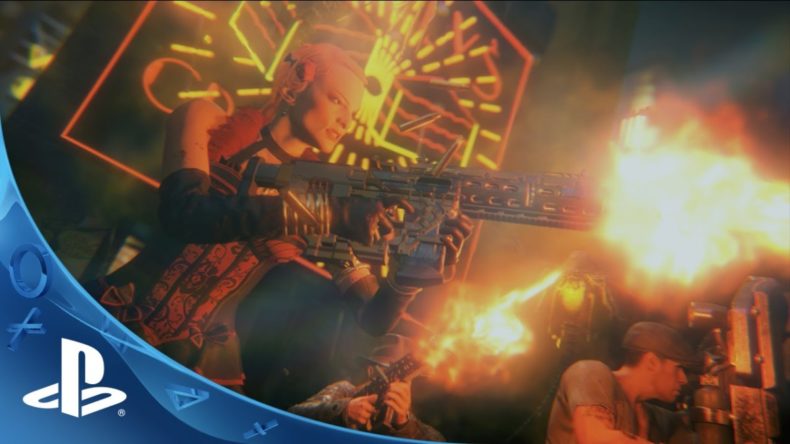 Wow, this is nutty. I know Comic-Con is famous for unexpected announcements, but was anyone expecting Call of Duty to ever feature a film noir zombie story starring Jeff Goldblum?
That’s what we’re getting this fall in Call of Duty: Black Ops 3. Entitled Zombies — Shadows of Evil, Activision unveiled it this afternoon during their Comic-Con panel. While zombies have been featured in many Call of Duty co-op modes in the past, we’ve never been given anything quite like this.

Call of Duty: Black Ops III: Zombies – Shadows of Evil drops players into a recognizable yet terrifyingly unfamiliar world, as they uncover the secrets and challenges laid out for them by a shadowy figure, who holds their fate in his hands.  Set in a 1940’s film-noir era, Shadows of Evil introduces four unwitting characters – The Magician, The Femme-Fatale, The Cop and The Boxer – into an unraveling experience masterminded by the mysterious Shadow Man. Featuring voices and likenesses, the characters are played by Jeff Goldblum (Jurassic Park, Independence Day), Heather Graham (The Hangover 1-3, Californication), Neil McDonough (Captain America: The First Avenger, Band of Brothers), Ron Perlman (Sons of Anarchy, Hellboy) and Robert Picardo (Star Trek: Voyager, Stargate SG-1).

There’s more. According to Treyarch Studios, a new ability can now be activated in the game that makes you grow tentacles to attack enemies with, and you make these tentacles come forth by eating candy, which makes perfect sense. The third Black Ops game is already out there with its sci-fi future gadgetry, but it’s future fiction that fits into the tone of the Call of Duty universe. Now we’re through the looking glass.
Know what? I’m fine with this.
Buy the Season Pass and you’ll get more zombie fun: a remake of the classic zombie map Der Rise, called The Giant and starring Steve Blum, Tom Kane, Nolan North, and Fred Tatasciore. This extra map will also come with the Hardened Edition and Digital Deluxe Edition of Black Ops 3.
Those who want to try out the newly revealed mode for themselves (and live in San Diego) can play a demo inside the PlayStation “Road to Greatness” Tour Bus, located near 450 Second Ave. The bus will be outside something even more interesting: what Activision is calling a “epic immersive experiential activity that places them in the middle of an unrelenting Zombie onslaught, giving them a firsthand look at the survivors’ intertwined stories for the ultimate Call of Duty Zombies brought to life.” That takes place from 2:00 pm to 10:00 pm on Thursday, 12:00 pm to 8:00 pm Friday and Saturday.

Then there’s the charity contest launched in partnership with fundraising platform Omaze. Starting today, and running through August 31, 2015, donating $10 or more to the Call of Duty Endowment via Omaze enters you into the running to be digitized into the game and appear as a zombie. You’ll also get a behind-the-scenes tour of Treyarch and eat lunch with studio head Mark Lamia.
It’s a lot to take in, I know. Think about how long it took to type. The insanity begins November 6.