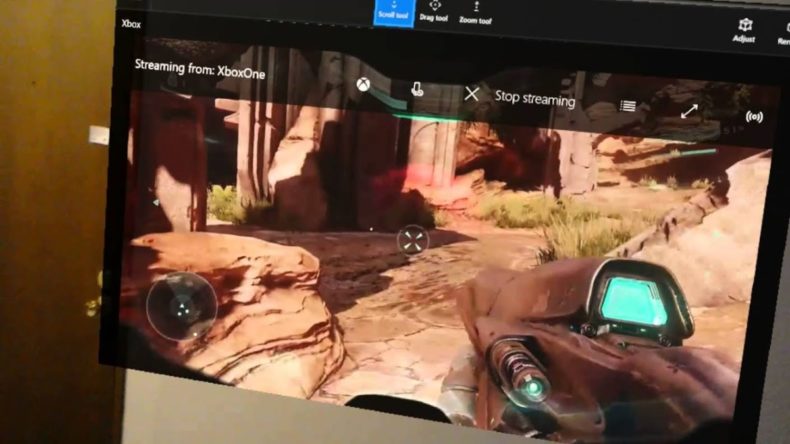 Microsoft has been bragging about the potential of streaming XBox One games to HoloLens, but until now, they never showed us what that would look like. Enter program manager Varun Mani, who today uploaded a YouTube video demonstrating how one would play Halo 5 on HoloLens by streaming the game from their XBox One to their eyes.

HoloLens is the name for the augmented reality glasses that Microsoft has had in development for some time now. Not quite VR (which closes off the outside world entirely), but close enough, HoloLens projects virtual items into real-world view, allowing for awesome concepts like playing with Minecraft blocks in your own living room. Microsoft purchased Mojang, developers of Minecraft, solely for this purpose.
Halo is just the beginning. XBox boss Phil Spencer said at the device’s unveiling, “To me, there’s not a successful consumer electronics device on the planet where gaming is not a primary app category, and I think HoloLens will work the same way; I think gaming will be important. We’re thinking hard about specific scenarios with the Xbox, with things like content streaming, and using it as a display for Xbox.”
HoloLens still isn’t ready for sale. Development kits will be sent to programmers in the spring of 2016, for the price of $3000 per set — hopefully the actual price of the finished product will be lower, for our sake and theirs.