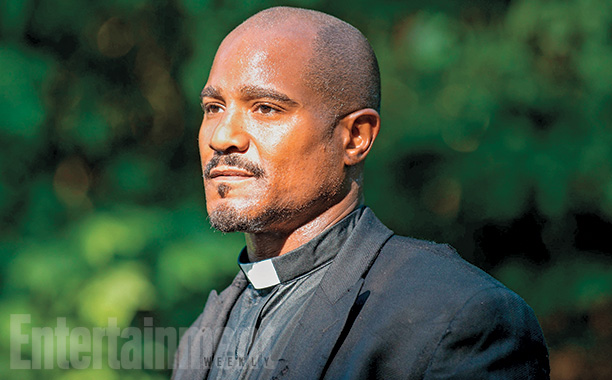 Here, after lots of leaked photos of The Wire alum Seth Gilliam in his priest’s collar and a quick appearance in the season five trailer, is the first “official” photo of Gilliam in the role of Father Gabriel Stokes. Gilliam will be playing the troubled priest from The Walking Dead comics, who has an important role in the show in season five.

Gilliam told Entertainment Weekly The Walking Dead’s producers were careful to conceal who he would be playing until he got the role. When he read for it, he actually read lines for a school guidance counselor named Michael.

Of course, once Gilliam started working, it was impossible to keep the new character’s existence from spoiler-hunting The Walking Dead fans, who were eager to get a shot of him in his costume.

“I spent the first week kind of creeping around from my trailer to the set, trying my best to cover myself. But then I noticed, some of those shots look like they were taken from, like, six blocks away with telescopic photo lenses. There’s really nothing you can do about covering that. I mean, I could look down the block and see that there’s nobody there and go, “Okay, I’m gonna step out now.” And then see a picture of myself stepping out, and be like, “Where did that come from?” There’s got to be somebody planted on a roof somewhere five blocks away. I don’t really get that, the whole spoiler thing. It’s kind of confusing to me why you’d want to give things away,” Gilliam said.

Less confusing was the warm welcome Gilliam says he got from the rest of the cast and the unofficial The Wire reunion that happened when he joined, reconnecting with Gilliam with his old castmates from the critically acclaimed show Chad Coleman and Lawrence Gilliard.

“We definitely did have a Baltimore bonding session when I got down there and saw Chad and Lawrence. I had dinner with (TWD Show Runner) Scott Gimple when I first got down there, and he said, ‘You know, after we had cast Chad, I made a promise to myself that I wasn’t going to cast anybody else from The Wire. But I love the show so much, and, you know, they just turned out to be the best people for the jobs. So I guess I’ve gone back on that,'” Gilliam said.

Gilliam said he’s only read issue 61, the first comic that Father Gabriel appears in, because he knows things on the show can go differently than the comic and he doesn’t want to get information that would be “useless, or just outright wrong” about the character.

The Car That Took Beth on The Season Five Set