Sledgehammer Talks About Narrative and Immersion in Call of Duty: Advanced Warfare 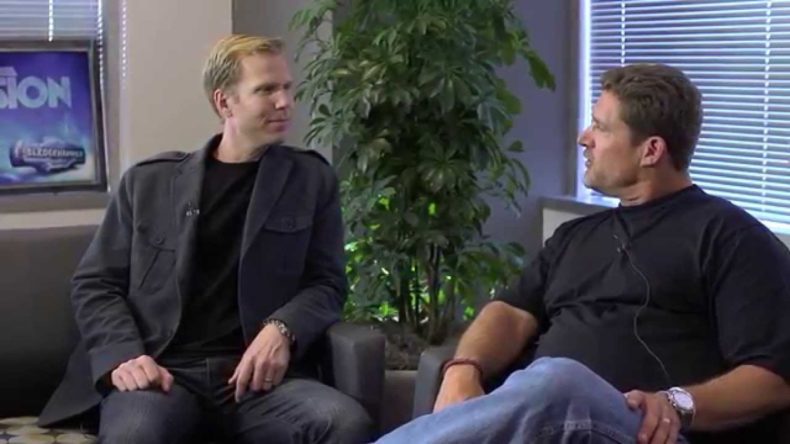 Game Informer has a 10-minute video interview with Sledgehammer Games studio heads Glen Schofield and Michael Condrey in which they talk  in depth about the upcoming Call of Duty: Advanced Warfare. The video linked above is just a trailer. For the full video go here.
The two men talk about topics like the challenge of innovating while keep the Call of Duty feel and tradition.
“Maybe we change it up as much as possible, but there’s something in it that people can say, ‘Yeah, it’s still Call of Duty,'” Schofield said.
Condry said the verticality, strength and other things made possible by the high tech setting and gear make Advanced Warfare a game that takes Call of Duty in directions it hasn’t gone before.
Although he jokes about blowing up the moon, Schofield says that the graphics fidelity of the new consoles make it possible to make the games more about “emotional connections.”
“Narrative is extremely important to us,” he said.
Part of making that narrative more focused was making sure there was only one protagonist in the game, Schofield said.
He describes that protagonist, Pvt. Mitchell, as “just sort of a normal guy” from the United States, almost intentionally generic, who you see grow over the course of several years. Mitchell is also the narrator of the game, although he won’t talk in the gameplay.
Condry said the game’s story will be told through load movie cinematics, instead of using those to hit the player with briefings and mission info. The mission info will be given more naturally within the mission through the HUD and other elements.
Schofield said Sledgehammer is working on a more immersive solution than Call of Duty’s famous “follow” dot, something that seems more like a natural part of a futuristic HUD.
The team has very ambitious goals the narrative and technology of the game, Condry said.
“Our goal as entertainers is to deliver like a red wedding (from Game of Thrones) scene, through interactive entertainment. And have people talk about Call of Duty on that sort of level one day,” he said.