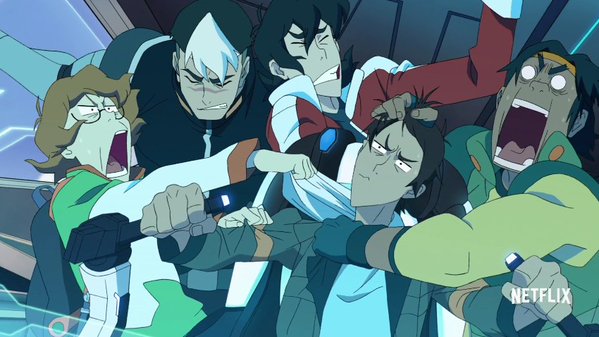 Anyone remember Voltron? It’s back. Netflix has produced a new version of the classic giant-robot series, Voltron: Legendary Defender. Steven Yeun is one of the five lucky pilots who will become the proud new owners of giant robot lions they can climb inside and manipulate. When the lions combine, they form Voltron, defender of the universe.

Yeun plays Keith, the Guardian Spirit of Fire and pilot of the Red Lion. “Keith is hot-tempered and rash,” says his official description. “A lone wolf at heart, he’d rather follow by his own rule even though he often looks up to Shiro. Maybe someday he’ll grow from his impulsive nature. Until then, he lends his talents as the team’s best pilot.”

If you need a second reason to watch, how about this: it’s from the same animation studio behind Avatar: The Last Airbender and The Legend of Korra, and has much of the same writing team behind it. This show looks dang pretty, and according to the critics, it’s not bad writing-wise either.

Our friends at Toonzone are holding a Premiere Episode Viewing Party for Voltron: Legendary Defender tonight at 9 PM Eastern, 6 PM Pacific. Start watching the show at that point in time, log onto TZ, pour yourself a soda and participate in the live talkback.

If You Haven’t Noticed, Glenn Has Yet To Kill Anyone

Glenn – High Five, Everybody!
Be the first to comment!
Leave a reply »