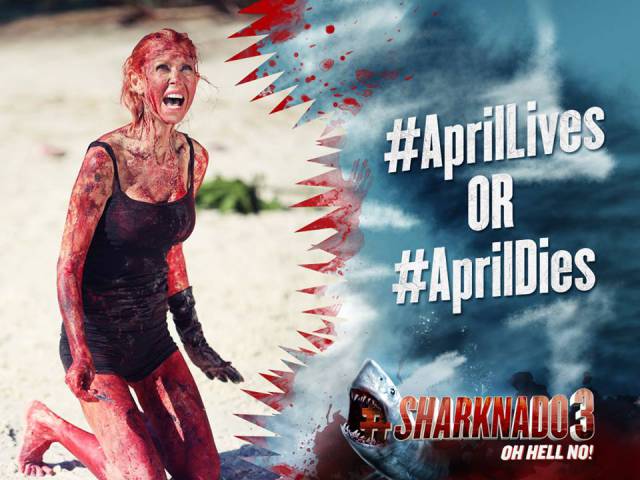 Forgive me for steering the conversation of this website in the Sharknado direction, but necessity dictates it. You would think this one-note premise would start running out of gas the third time people saw it, but Sharknado 3 performed stronger than ever for SyFy, generating more Twitter activity than “every episode of the final season of Mad Men, every episode of this season’s The Bachelor, and Hillary Clinton’s presidential announcement.” (An impressive feat considering fans of those first two things NEVER SHUT UP about them.) They’ve now greenlit another one, naturally — but with a twist. They may or may not kill off the main character, April Wexler, between #3 and #4, and they’re leaving it up to their very vocal fans on Twitter to decide.

Wow, this is cruel.

I’m sure a lot of people remember the early 2000’s when Tara Reid was the prototype for what Lindsay Lohan would become, and they’re going to eagerly slam the “KILL” button with fervor. But think about this for a second. It’s been a long time since then. Reid sunk her own career as a teen, to be sure, but she’s a grown woman now, and for the most part couldn’t get a job in Hollywood mowing lawns until this happened to her. If she doesn’t have Sharknado, then she has nothing. Taking the one thing, the one-in-a-billion unlikely hit that propelled her back into the public eye — and then yanking it from her feels wrong.

I don’t tweet very much, and I don’t watch Sharknado movies either, but I would vote #AprilLives if only for that reason, for the guilty conscience factor. Call it charity if you want. But I just can’t kick someone who’s already down.

Wes Craven’s New Nightmares
Be the first to comment!
Leave a reply »