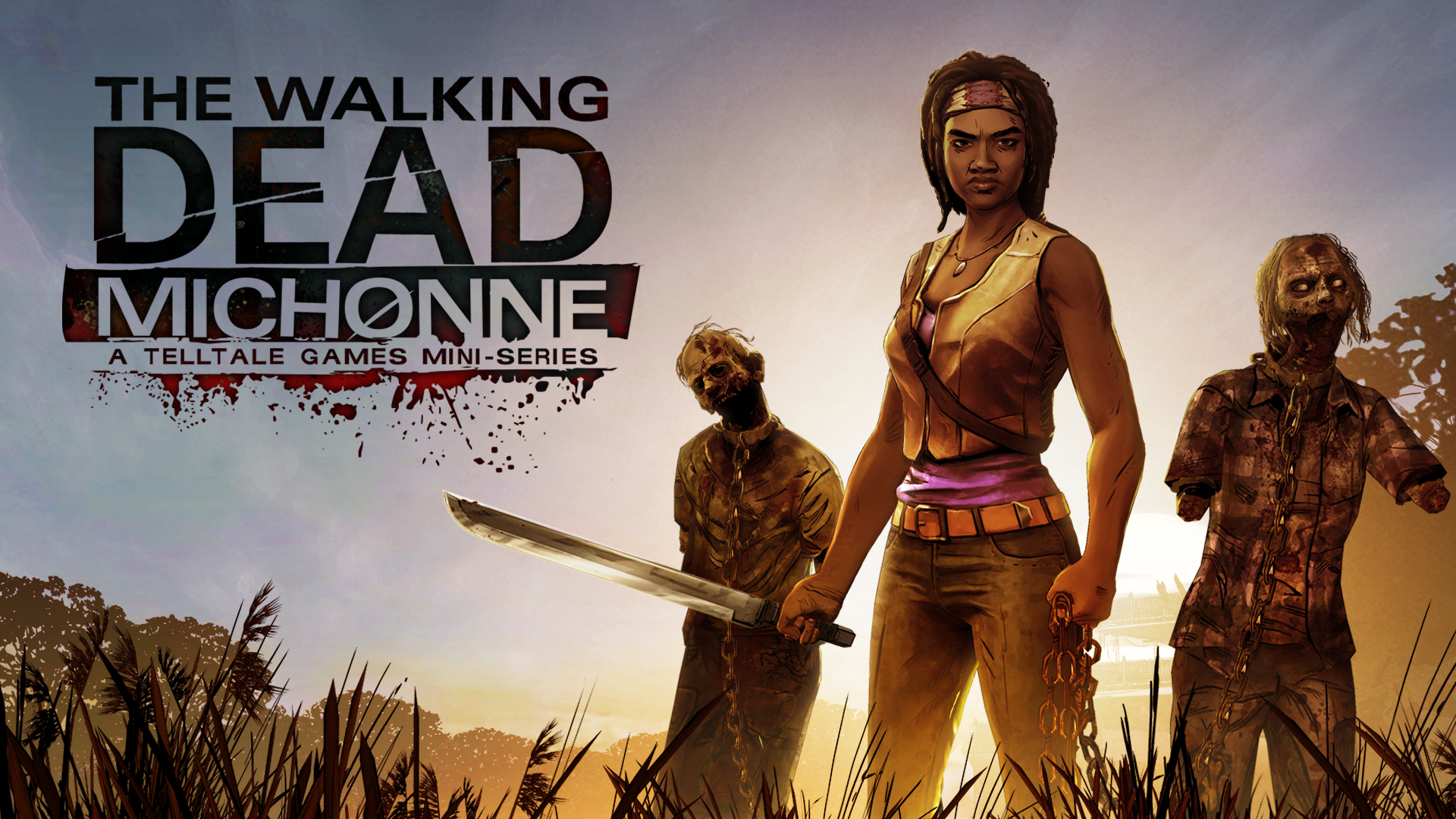 Telltale’s series of Walking Dead games has hit some delays and the next installment may not be out for some time. To fill the space, the game developer has announced a new spinoff title, The Walking Dead: Michonne, for release on PC and consoles later this fall.

The new game stars….well, guess, and is about what happened to her during her absence between issues #126 and #139 of the comic book. To play the spinoff, you’ll need to already own at least the first episode of Walking Dead Season Two.

Is this filler sanctioned by Robert Kirkman? Yes it is, and he had a hand in its storyline, so you know it’s canon. “In many ways, Michonne herself is a reflection of the world of The Walking Dead,” Kirkman said. “She is brutal and cold on the outside, but deep beneath what is broken, she remains hopeful, trying to claw her way out of the darkness that surrounds her. In our effort to bring the world of the comic and the world of the Telltale series closer together, there is no greater character than Michonne to help bridge that gap.”

For the full details, see the extended press release below.

SAN RAFAEL, Calif., June. 15, 2015 – Leading publisher of digital entertainment Telltale Games and Robert Kirkman, the Eisner Award-winning creator and writer of  The Walking Dead for his Skybound imprint at Image Comics, announced today a new installment for the best-selling and award-winning  The Walking Dead: A Telltale Games Series franchise set to premiere later this fall.

The Walking Dead: Michonne – A Telltale Games Mini-Series stars the iconic character from the comic book series haunted by her past and coping with unimaginable loss and regret. The story explores her untold journey during the time between issues #126 and #139. Through this Telltale Games mini-series of 3 episodes, players will discover what took Michonne away from Rick, Ezekiel, and the rest of her trusted group… and what brought her back.

Premiering this fall,  The Walking Dead: Michonne will be available for download on PC/Mac from the Telltale Online Store, Steam, and other digital distribution services, the PlayStation®Network for PlayStation 4 and PlayStation 3, the Xbox Games Store for Xbox One® and Xbox 360® video game and entertainment system from Microsoft, compatible iOS devices via the App Store, and Android-based devices via Google Play and the Amazon App Store.

Players will require at least the first episode of  The Walking Dead: Season Two in order to play  The Walking Dead: Michonne. Further information about how to access the mini-series will be made available closer to the premiere.

“In many ways, Michonne herself is a reflection of the world of The Walking Dead. She is brutal and cold on the outside, but deep beneath what is broken, she remains hopeful, trying to claw her way out of the darkness that surrounds her,” said Robert Kirkman, creator of The Walking Dead.  “In our effort to bring the world of the comic and the world of the Telltale series closer together, there is no greater character than Michonne to help bridge that gap.”

“Michonne’s complexity and range make her an ideal lead for the compelling interactive drama fans have come to expect from Telltale,” said Kevin Bruner, Co-Founder and CEO of Telltale Games.  “With this mini-series, players will experience Michonne’s challenges first-hand, and the choices they make will shape her journey. We’re incredibly honored by Robert for the opportunity to share this untold story in The Walking Dead universe.”

To date,  The Walking Dead: A Telltale Games Series has sold  more than 44 million episodes worldwide, earning  more than 100 Game of the Year awards from outlets including  Metacritic, USA Today, Wired, Spike TV VGAs, Yahoo!, The Telegraph, Mashable, Polygon, Destructoid and GamesRadar, and was also the recipient of two  BAFTA Video Games Awards for  Best Story and  Best Mobile Game.

The Walking Dead is set in the world of Robert Kirkman’s award-winning comic book series and offers an emotionally-charged, tailored game experience where a player’s actions and choices affect how their story plays out across the entire series.

Robert Kirkman’s success and passionate advocacy for creator-owned comics led him to become the first person invited to become a partner at Image Comics since the company’s inception twenty-one years ago. Kirkman is the creator/writer of the Eisner Award-winning  The Walking Dead, long-running  Invincible, all-ages  Super Dinosaur and  Thief of Thieves. In 2010, Kirkman formed his own Image imprint, Skybound, which publishes his own work and  Witch Doctor, Invincible Universe, Clone and  Ghosted. Kirkman has earned the respect of the comic, writing and television communities and topped the New York Times bestseller list for graphic novels in 2011 and 2012. In April 2012, he took the top five spots on both the hardcover and paperback lists. He’s the creator/executive producer and writer of the hit Emmy®-winning television show, AMC’s  The Walking Dead, the highest-rated basic cable drama of all time in the U.S, also an international success in 122 countries and 37 languages. Your destinations for all news and merchandise from Robert Kirkman, The Walking Dead and all Skybound titles are  www.Skybound.com  and  www.TheWalkingDead.com .

In 2010,  The Walking Dead creator Robert Kirkman saw an opportunity to start a company that would nurture creators and give them resources to produce content while retaining creative control of their properties. Partnering with longtime collaborator, and fellow executive producer of  The Walking Dead David Alpert, Skybound Entertainment was born. Since opening its doors Skybound Entertainment has grown into a multiplatform entertainment company. CEO Robert Kirkman iscreator of the award-winning  The Walking Dead comic book series, the inspiration for the hit TV show of the same name where he serves as creator and executive producer. To date  The Walking Dead is the #1 on television among the coveted 18-49 demo. Kirkman and Alpert will also executive produce the upcoming Walking Dead companion series for AMC. Skybound Entertainment recently produced its first feature film,  AIR, starring  The Walking Dead’s Norman Reedus and Academy Award-nominated actor Djimon Hounsou. The film is slated to be released in summer 2015. Kirkman and Alpert serve as producers on the post-apocalyptic sci-fi film. Skybound released Kirkman’s newest comic,  Outcast, in June 2014 which recently received a series pickup for CINEMAX with Fox International attached as the studio.  Outcast, starring Patrick Fugit as Kyles Barnes and Philip Glenister as Reverend Anderson, will begin production this summer.
Kirkman and Alpert will serve as executive producers on the series. Skybound Entertainment has also entered the world of digital content production with Disney-owned Maker Studios. The pair recently launched  Nerd Court, a play on the classic  People’s Court show, where nerds can bring their foes before a judge to settles their fandom-related disputes. The series was created by  Book of Eli’s Gary Whitta. The company has also partnered with Samsung to develop virtual reality content for Milk VR. Other comic book titles published by Skybound include  The Walking Dead, the superhero-comic  Invincible, fantasy adventure comic  Birthright, the revenge drama  Dead Body Road, and heist comic  Thief of Thieves. Skybound also creates a wide range of merchandise, including its first tabletop card game  Superfight, apparel, board games, and action figures. For more information, please visit Skybound online at  www.skybound.com  and www.thewalkingdead.com .

Image Comics is a comic book and graphic novel publisher founded in 1992 by a collective of best-selling artists. Image has since gone on to become one of the largest comics publishers in the United States. Image currently has five partners: Robert Kirkman, Erik Larsen, Todd McFarlane, Marc Silvestri and Jim Valentino . It consists of four major houses: Todd McFarlane Productions, Top Cow Productions, Shadowline and Image Central. Image publishes comics and graphic novels in nearly every genre, sub-genre, and style imaginable. It offers science fiction, romance, horror, crime fiction, historical fiction, humor and more by the finest artists and writers working in the medium today. For more information, visit  www.imagecomics.com .

Telltale is a leading and award-winning independent developer and publisher of games for every major interactive platform from home consoles and PC to mobile and tablet devices, and is the pioneer of the episodic delivery of digital gaming content. By successfully developing games as an episodic series and frequently releasing in the format of a game season, they create longer consumer engagement than traditional games for each release. Founded in 2004 by games industry veterans with decades of experience, Telltale has quickly become an industry leader with numerous honors and awards from the Academy of Interactive Arts and Sciences, BAFTA, the IMGA, and more, as well as being named Studio of the Year across multiple years. Telltale’s reputation for quality has been established across more than two dozen different product releases over the years with recognition and acclaim from publications like IGN, The New York Times, and Variety, including over 100 “Game of the Year” awards from publications like USA Today, Yahoo! Games, Wired, Spike TV VGAs, E!, Official Xbox Magazine, The Telegraph, Metacritic, and more.  Telltale is a fully licensed third party publisher on consoles from Microsoft, Sony, and Nintendo, and also publishes games on the PC, Mac, iOS, and Android-based platforms. For more information visit www.telltalegames.com .