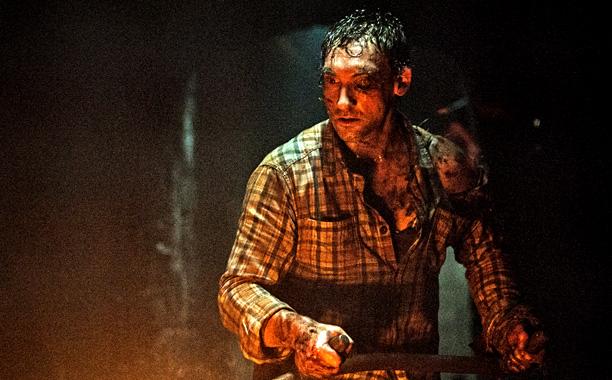 Let’s be honest with ourselves, horror isn’t what it used to be. At one time, the horror genre was meant to terrify, to make you jump out of your chairs in fear of who or what might be around the corner. Now? It’s a gore-fest. No, it is. It’s all about elaborate ways to kill people, with little to no serious story.

There are those however who are trying to prove that horror can still be horrifying, all the while still being a monster movie.

Take for example The Hallow, made by British filmmaker Corin Hardy. The movie may sound like a stereotype of typical horror at first, but once you delve deeper into it, you see that not all is as it appears. First off, Hardy takes a more physical approach to filmmaking, literally shooting in as many real areas as possible.

“I was trying to do everything as real as possible. The locations were in the middle of nowhere. We shot in five forests. We shot in lakes. When I said to the actors, ‘Let’s go in this lake at four in the morning in the freezing cold,’ I had to get in with them to literally test out the ground myself”

As for the story itself, the movie stars Joseph Mawle, who plays a family-man and conservationist who takes the family on a trip to some believed hallowed ground. But…his actions “unwittingly disturb a horde of demonic creatures who prey upon the lost. Alone and deep within the darkness of the remote wilderness, he must now fight back to protect his family against the ancient forces’ relentless attacks.”

Again, it sounds like typical stuff at first. But then you see what Hardy is trying to do in regards to making this feel like a fresh and new monster horror movie. He didn’t want CGI, and he didn’t want to use monsters that had already been done before in numerous monsters. So, he decided to go to a different kind of realm for inspiration, then went to a man he knew could physically make the monsters he was seeing in his head.

“I’m a big genre fan and I want to make movies with a fresh approach to monsters,” says Hardy. “As much as I love vampires and werewolves and all the rest, I was looking at monsters that we haven’t seen as much. I decided I wanted to do a fairytale, but grounded in reality—a non-magical version. “I wanted to find someone in the U.K. who was the equivalent of one of those creature creators like Stan Winston or Rob Bottin,” says the director. “I found a guy called John Nolan, who did an incredible job, as you’ll see. We did everything very practically and then enhanced things slightly with visual effects.”

I believe him, because it seems like Hardy truly does want The Hallow to be something different, to be more than the labels and stereotypes you see in horror movies nowadays. We’ll just have to see how successful he is.