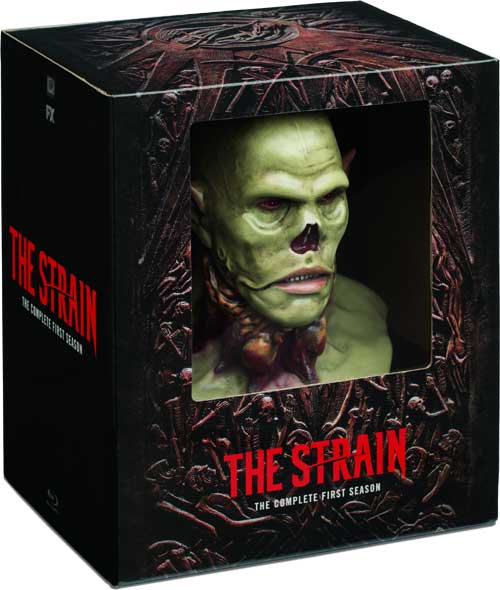 The Strain is FX’s gross vampire/disease show, perhaps most culturally known for its infamous “worm peeking out of eyeball” advertising art, which became nightmare fuel for countless children who happened to be walking by it.

To wring a few more months of sales out of the home video market before Season Two hits, Twentieth Century Fox has repackaged the Season One Blu-Ray into a “collectors edition” that comes with a big bust of The Master. That would be the green noseless head peeking out of this box:

How much is that head in the window? The press release doesn’t really say what the price will be, but it does reveal that other than the main gimmick, nothing else will be different from the December Blu-Ray release, so unless you really want this thing, you can skip it.

The head version of “The Strain Season 1” will be available in June. See the full press release below for full details.

When a freak virus kills most of the passengers on an airplane, Ephraim Goodweather (Corey Stoll), head of the Center for Disease Control’s “Canary Team,” is immediately called to the scene. The only way to stop the terrifying disease is to face its source – a sinister supernatural creature whose evil intent seems more powerful than any force on Earth – in this chilling series that also stars Mía Maestro, David Bradley and Sean Astin.

The Strain Episode 13 ‘The Master’ Airs Sunday on FX