The Unlikely Heroics of Andrew Lincoln 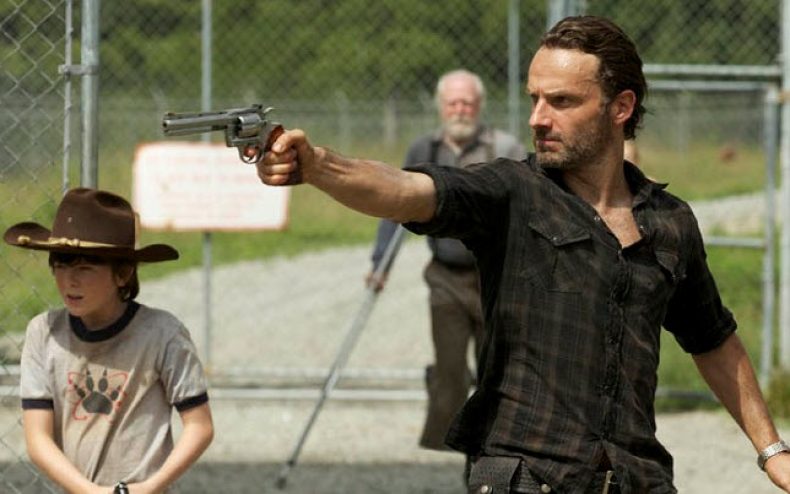 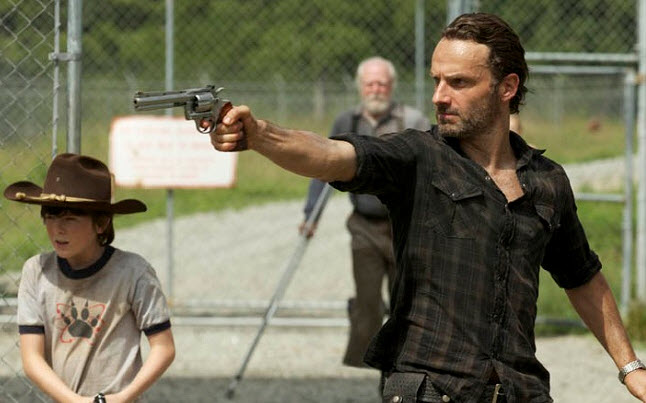 Developing attachments to The Walking Dead characters is hazardous to your emotional well-being, unless you fix your sights steadfastly and rigidly on the closest thing the series has to a protagonist, Rick Grimes. Through his eyes, you can follow the warm, comfortable feelings of love and compassion, until the warmth begins draining out a little at a time into steely blue. This transformation, of course, isn’t Rick’s fault. As a small town sheriff, he was a defender of law and order, innocent victims; a family man who stood up righteously for family values. However, innocence is no longer the issue. It is kill or be transformed into the flesh eating dead.

Sheriff Grimes isn’t the type of hero we all normally admire and embrace for nearly invincible strength, prowess and/or advanced weapons technology. His first zombie encounters are bumbling. He survives only by the miraculous intervention of others. As he gains experience, he relies more on cunning and stealth than he does brute force. Super hero fans almost feel jaded by a protagonist who thinks his way through his problems.

It’s easier to transfer our affections to other characters in the series, but the transfer can very easily result in a fit of teeth gnashing frenzy when those favorites bite the dust. You learn to beware when you begin developing a fondness for particular personality traits. Just when you become comfortable with Dale’s voice of reason, that rational voice is snuffed out forever, and you wonder, who can possibly guide the conscience of the group now?

Just as Grimes makes an unconventional hero, his leadership is often up for review. Even his late wife, Lori, occasionally criticized his decisions, but assured him she would always stand by him, with an implicit, unspoken “right or wrong” hanging in the air. His leadership is based on a certain resignation that there simply isn’t anyone else who could do the job better. The one person to challenge him, his best friend, is more concerned about his own survival than he is about the group as a whole, yet torments Grimes for jeopardizing others for the sake of the individual. His only apparent reason for not taking a hike away a long time ago, is an infatuation with Grimes’ family. He piles guilt on Rick Grimes’ already tortured conscience until the sheriff finally accepts there just isn’t room for the two of them within the group.

Andrew Lincoln appearing on ‘The Late Show with David Letterman’

British actor, Andrew Lincoln, carries off the role of Sheriff Rick Grimes with aplomb. His portrayal is tightly controlled, with no unnecessary pathos. From a peace loving individual, he gradually shrugs off his inhibitions and reservations in a world where not only zombies are a threat, but so are gang-led living marauders into barbarism. He must steel himself to kill infected members before they resurrect as walking dead.

Lincoln has been busy playing roles on television since 1994, with guest spots in “Drop the Monkey”, a political satire, and “Bramwell”, a TV mini-series based around a late nineteenth century woman’s defiance of protocol by choosing to go into the medical profession. He began gaining media exposure with his character role as Edgar “Egg” Cook in the 1996-1997 television series, “This Life”and clinched highlighted attention for his role as Mark, in “Love Actually”.

It’s doubtful he envisioned becoming the main star on The Walking Dead would be the swift chariot he needed to his rise in fame. Thirty-nine year old Lincoln received his performing arts education at the Royal Academy of Dramatic Art in London. He was serious enough about giving his all and so attended the school where his brother taught for three weeks in order to fill the role for a series called “Teachers”. Perhaps though, this serious side is what allowed him to pull off the character so well in The Walking Dead. The role is challenging; so low-keyed, it makes it difficult to truly love the main character, to see him as a hero, yet determined enough to capture the human will for survival. It’s conflicted enough to split the groundwork between moral and practical choices, yet noble enough to garner respect. With a polished resume that includes narration for documentaries, Lincoln’s career will be far from over with the end of the series, but he will always be remembered, first and foremost, as the main character for The Walking Dead.