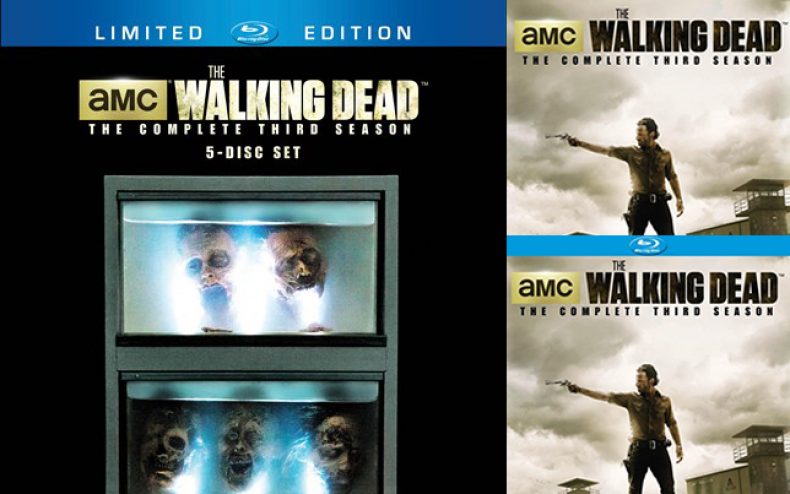 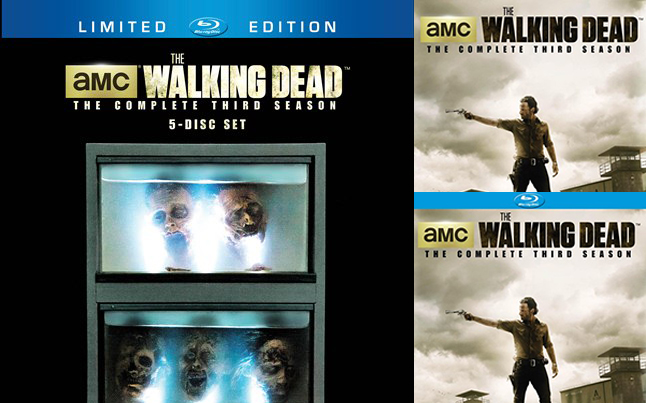 The Walking Dead Blu-ray, and DVD set, will not only feature the 16 episodes from season 3, but will also have a lot of extra bonus features that fans will just love.

The set consists of 5 discs and it will have behind-the-scenes footage, commentaries, deleted scenes, featurettes, and even some surprises.

The Blu-ray limited edition set will even come in some really cool packaging, which happens to be the zombie heads from the fish tank scene. This will add a ton to your already cool sets from the previous seasons!

So while we do have about 4 months or so to wait until season 4 of The Walking Dead which will premiere this fall, you don’t have to wait much longer for the complete season 3 set. The full press release is below if you want to check out all the details.

CONTINUES THE JOURNEY WITH

BEVERLY HILLS, CA – It has become a cultural phenomenon. The fans embrace it, the critics adore it. And now the stakes have never been higher for the survivors…On August 27th, Anchor Bay Entertainment unleashes AMC’s original series THE WALKING DEAD: THE COMPLETE THIRD SEASON on Blu-ray™ and DVD. Available as a 5-disc set in each format, the release contains all sixteen episodes from the past season. Like the previous releases, THE WALKING DEAD: THE COMPLETE THIRD SEASON comes stuffed with tons of bonus features, including exclusive behind-the-scenes footage, never-before-seen featurettes, audio commentaries from cast and crew, deleted scenes and other surprises!

Based on the hugely popular graphic novels by Robert Kirkman, THE WALKING DEAD: THE COMPLETE THIRD SEASON continues to draw in record audiences. Season 3 follows the weary group of survivors led by police officer Rick Grimes (Andrew Lincoln), as they take refuge in a prison and attempt to set up a permanent camp. But while invading zombies are an ever-present danger, they must also battle the living, not only in the form of abandoned prisoners, but also the sadistic “Governor” (David Morrissey) and his followers. New characters introduced this season include Danai Gurira as “Michonne,” with her two “zombie pets” in tow, and Dallas Roberts (Shadow People) as the Governor’s lieutenant Milton, as well as the return of Merle Dixon (Michael Rooker).

Season 4 of “The Walking Dead” premieres on AMC this October.

Whether commemorating favorite films from every genre and decade or creating acclaimed original programming, AMC brings to its audience something deeper, something richer, Something More. The network reigns as the only cable network in history ever to win the Emmy® Award for Outstanding Drama Series four years in a row, and boasts the most-watched drama series in basic cable history with “The Walking Dead.” AMC’s original drama series include “Mad Men,” “Breaking Bad,” “The Walking Dead,” “The Killing” and “Hell on Wheels.” Its newest series, “Low Winter Sun,” premieres this summer.  AMC also explores authentic worlds with bold characters through its slate of unscripted original series like “Comic Book Men,” “Small Town Security,” “Talking Dead,” and “Freakshow.” AMC is owned and operated by AMC Networks Inc. and its sister networks include IFC, Sundance Channel, and WE tv. AMC is available across all platforms, including on-air, online, on demand and mobile. AMC: Something More.

A big fan of The Walking Dead television series. In my spare time I enjoy blogging and simply hanging out. Oh and lets not forget, Go NY Giants!
You might also like
Blu-rayDVDExtras