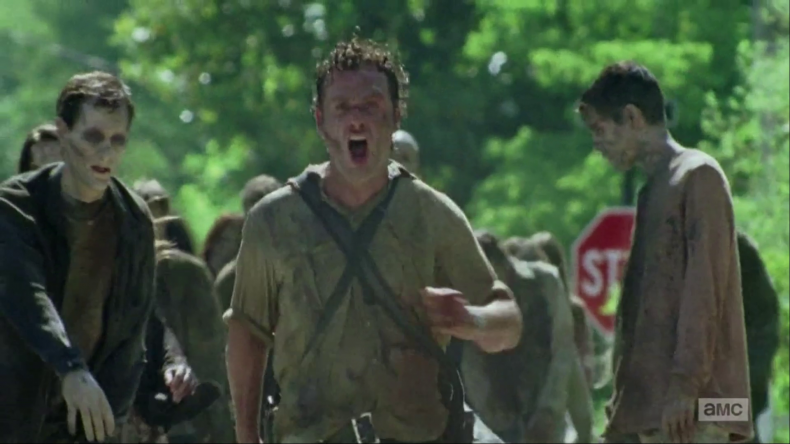 It was bound to happen: even in an excellent season such as this, we got an episode where not much of anything happened. The main reason for this was because, for once, somebody headed down the road to a bad decision but THEN turned around and said “You know what, never mind, this idea’s stupid.” This is why that doesn’t happen too often.

The episode opened with Queen Deanna wandering around in a stupefied haze, which describes nearly every other scene she’s in, so that saves me some time. She’s standing on top of the tower gazing at nothing in particular when she suddenly hears, “OPEN THE GATES! OPEN THE GATES!” We didn’t get any answers about Glenn, but we learned the fate of Rick right away: Right after the cliffhanger from two episodes ago, Rick apparently ran all the way back to Alexandria on foot while being chased by the herd. That’s insane when you think about it, even for Super Rick. 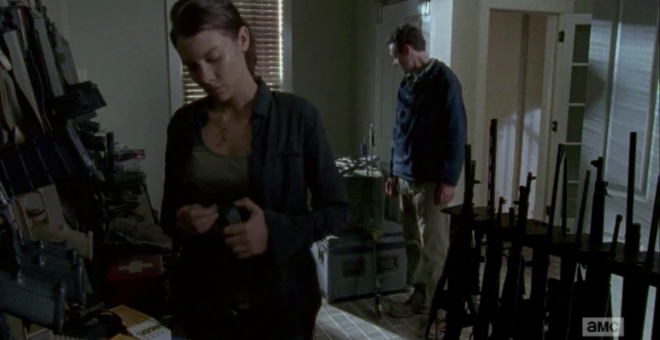 With the wall of Walkers blocking off anyone else from returning, a lot of Alexandrians assume the majority of people that ventured out there and didn’t return with Rick must be good as dead, and they add their names to the wall of the fallen. In most cases they’re correct, but Maggie Greene, the awesome wife that she is, takes great issue with the addition of Glenn’s name and straps on machine guns to brave the herd on a rescue mission.

Aaron insisted on going along, partly out of being worried for Maggie’s safety and partly out of shame for being the one responsible for exposing Alexandria’s existence to the Wolves. If you recall, in the previous season he absentmindedly left a manila folder of Alexandria photos in an abandoned car. He found that folder next to a dead Wolf and put two and two together. 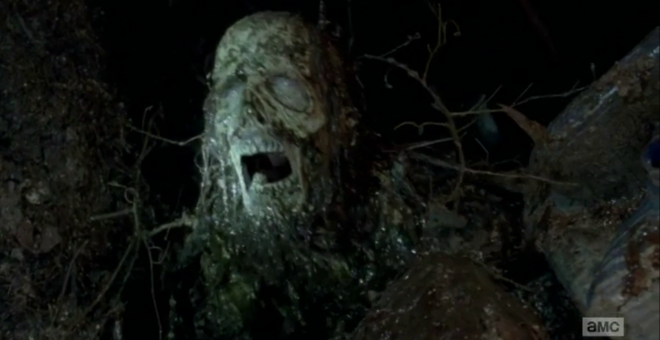 Since they won’t stand much of a chance on the ground, why don’t they go below? Aaron suggests traveling through the sewer — maybe they’ll bypass the herd entirely. I wouldn’t have ruled out running into some kind of zombie down there, though, and that’s exactly what they get: SWAMP THING WALKER!!

Maggie tries to fight him off, but gets her fists stuck in Swamp Thing’s swamp guts. It looks like she’s had it when Aaron comes from behind and stabs Swamp Thing in the head. Maggie then insists that she “had it under control.” Uh-huh, sure. What was left, your feet? 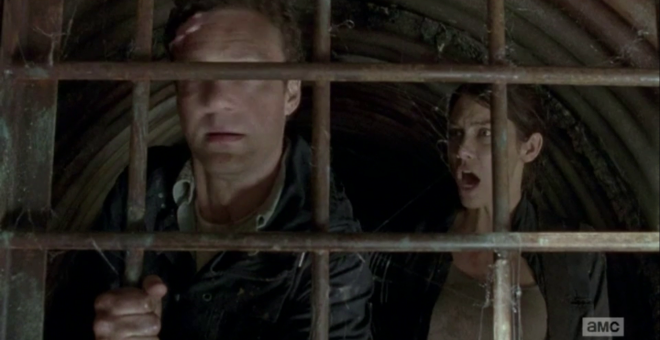 When Maggie and Aaron get to an opening, it’s unfortunately not far enough and there are Walkers outside. Aaron remains positive and suggests they go out there anyway, “it’s just a few of them.” But Maggie’s not stupid. “NO, WE’RE GOING BACK,” she yells, loud enough for about twenty Walkers to clang against the gate and prove her point.

Maggie then confirms that she’s pregnant with Glenn’s baby. The good news is that she probably won’t die in childbirth because Lori already did and repeating the same death twice would be bad writing. 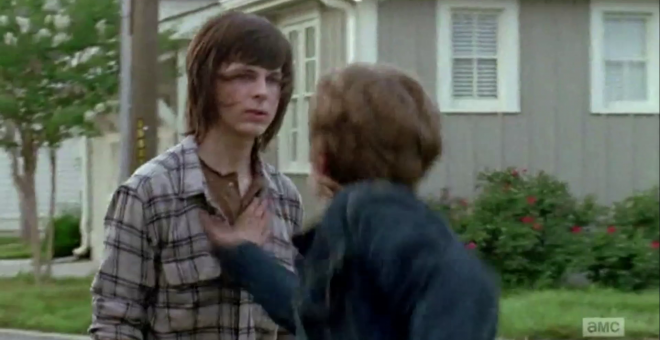 Carl also briefly considered going out there to rescue a woman, in this case his friend Enid. This other teenager caught him in the planning stage and told him it was a bad idea, but Carl kinda blew him off because he’s the competition for Enid and he and Carl have been giving each other the stink-eye ever since the Alexandria arc started. So Carl’s goin’ out there! When you study human history, you realize it’s stupefying what men will risk for sex. 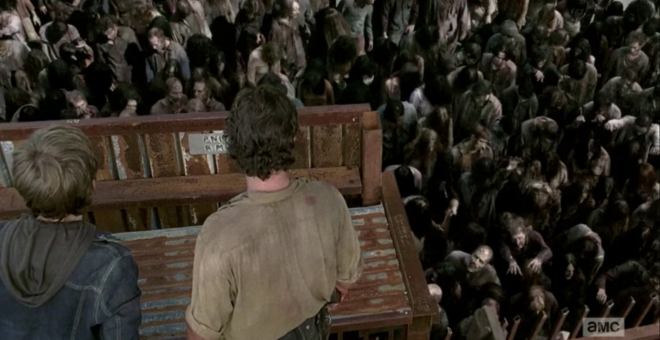 ….Then Carl caught a view from on top of the tower and said, “Never mind, libido vanishing.” It’s the second time somebody headed toward danger and turned around in one episode. Two has to be a record!

I may be doubtful about Glenn, but I fully believe Enid is surviving out there for this reason: at some point in the future Carl is going to be walking through the woods, he’s going to see the letters “JSS” carved on a tree, and he’s going to smile to himself, maybe nod his head a bit. Why would they plant her signature if they didn’t plan on using it at least one more time? 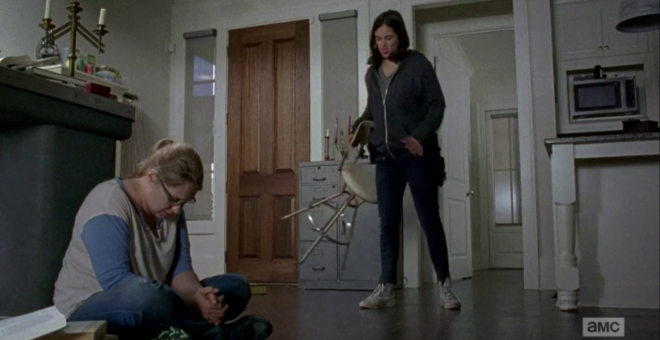 Speaking of the mating process, people kissed today. Fake Doctor Lady stumbled around and said something about the end of the world, and then kissed her assistant out of nowhere. That is…..sure a thing that happened. They’re essentially two strangers here; it’s hard for me to care. Was this spontaneous or was there buildup off camera that nobody saw? What kind of past do they have together? No idea. Fake Doctor has only appeared in one other episode and I know nothing about her other than she’s a lesbian and she sucks at surgery.

Then in the last few minutes of the episode Rick met up with Jessie, they chatted for a while and then THEY kissed. So who out there has been shipping Rick and Jessie? Show of hands…..two? Three? That’s what I thought. You wouldn’t think it possible, but Jessie is even duller than Lori was. Rick’s mate should be as dynamic as Rick. It should be somebody so interesting that even when you’re stuck with one of the episodes where they do nothing but talk, you WANT to hear them talk, because their personality is just that bold. Am I wishing for too much? 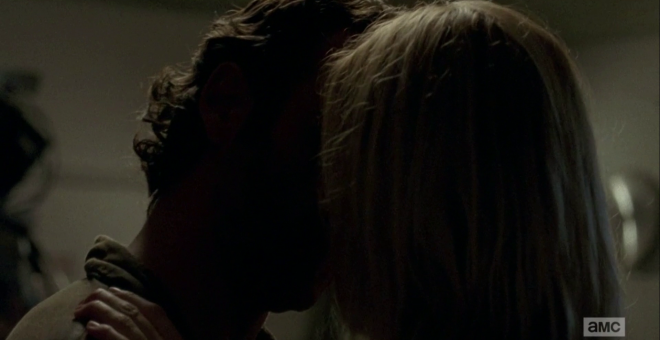 I expect the action to pick back up in the next episode; they wouldn’t spend a second hour here. Rumor has it next week we’ll get an overdue focus on Daryl, Abraham and Sasha, who if you recall are currently driving in front of an army of Walkers using fossil-fuel vehicles that are going to need gas at some point.

(Unless all the gas has gone bad. According to last week’s episode of The Last Man On Earth processed gasoline has a lifespan of about three years, a time span The Walking Dead blew past seasons ago.)

AMC Creates Virtual Alexandria Safe Zone For You To Explore