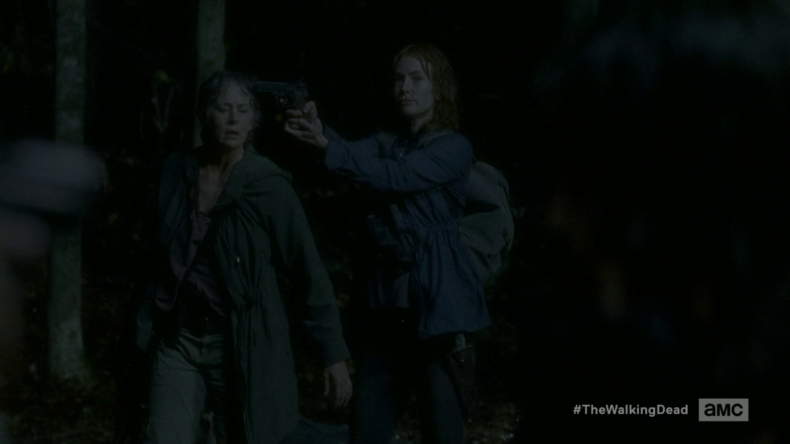 Maggie and Carol have become two of the best characters in The Walking Dead’s current cast, so an entire episode centered around the both of them was certainly welcome. As irritated as I was by how easily they were captured at the end of the last show, it was worth it if it got us this.

Right after the conversation we saw them have in the previous episode about rushing in or not, a Savior snuck up frrom behind them out of the woods. Maggie whirled around and shot him in the arm. Two females approached, and thinking quickly, Maggie pointed her pistol at the guy on the ground, shouting that he would die if they didn’t back off. Too bad one of them now had Carol and was proposing a similar fate. 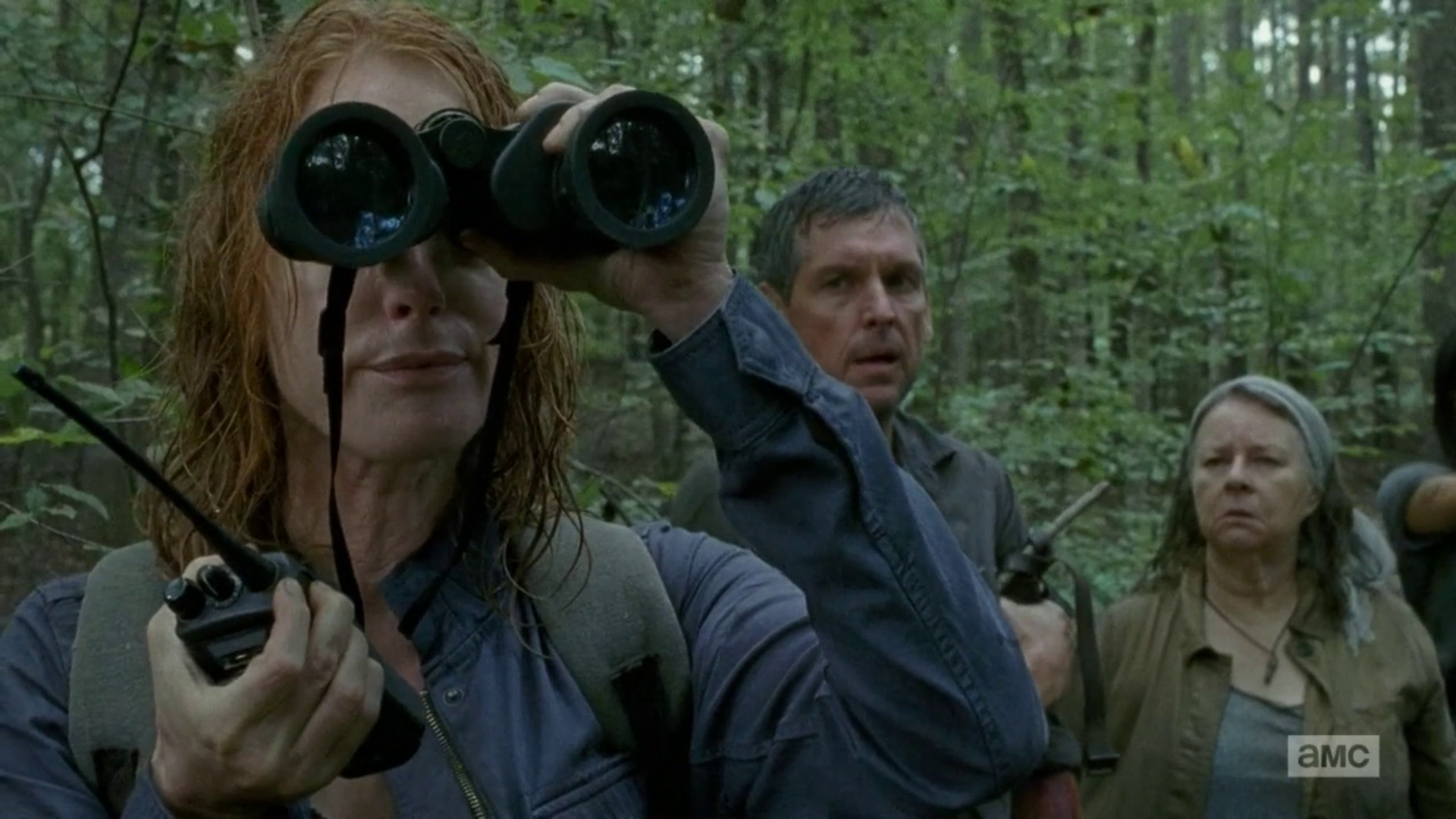 So who was on the other end of that walkie-talkie? It was Paula, our special guest star, played by Alicia Witt. Paula is only going to exist for this one episode, but she leaves a strong impression. In less than an hour we find out nearly everything about her personality, her backstory, and her mental state. If only every ancillary Walking Dead character could be so richly defined.

Through an extended version of the walkie-talkie conversation we learn Team Rick currently has the Saviors’ doctor in their possession and he’ll be needed to save the life of the guy Mags just shot. If not for this, I expect the pair would have been executed right away — if you returned home to find nearly everyone YOU knew murdered, what would YOU do? The dual hostage situation results in a tense standoff, and they agree to some kind of body exchange, to be held later at a time of the Saviors’ choosing. Maggie and Carol have their jackets pulled over their heads and are led to a secret base. 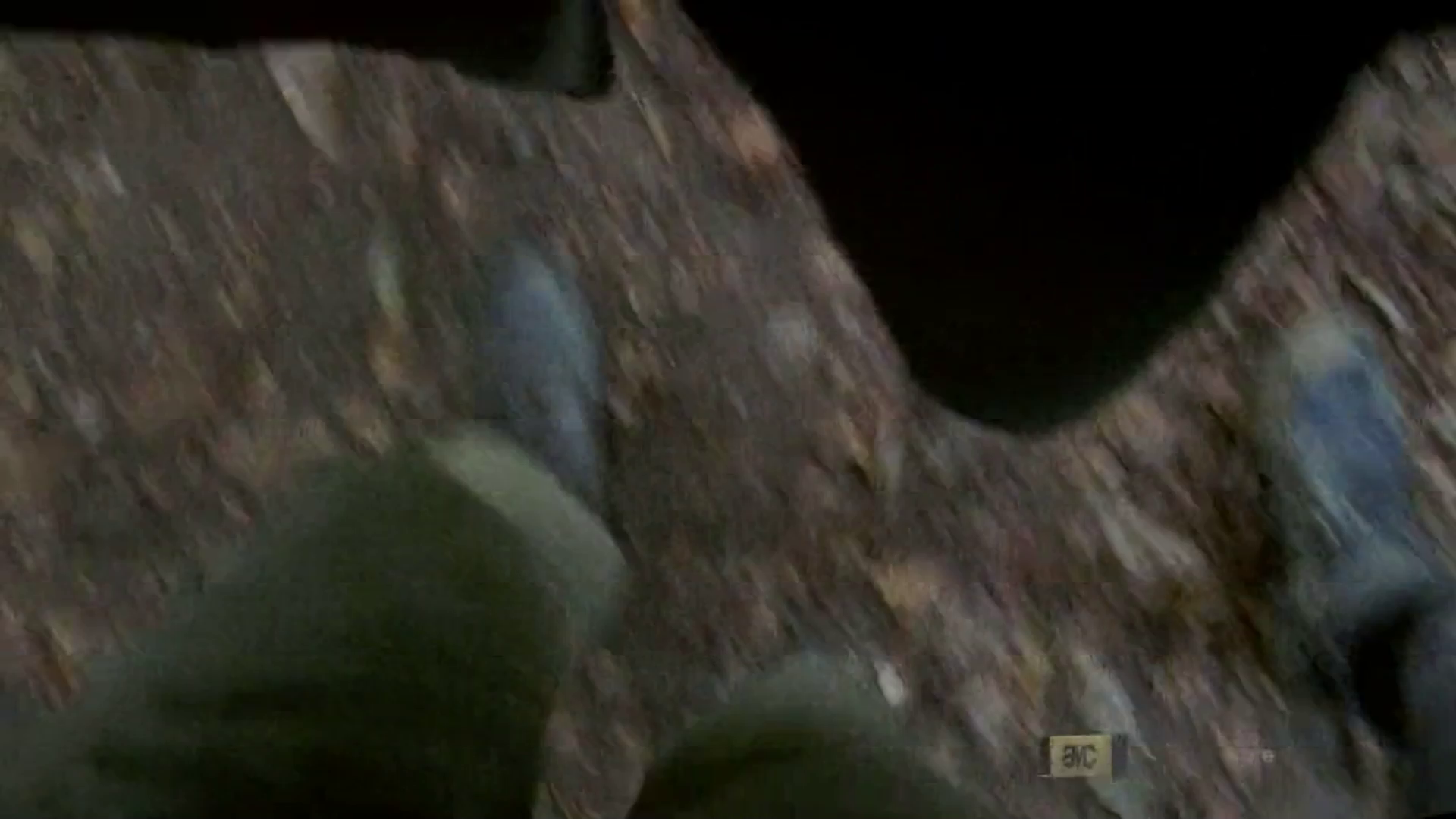 This little sequence reminded me of all the trailers I’ve been seeing lately for an action movie called Hardcore Harry that’s shot entirely in first-person. Even if the film isn’t a success, I expect it to become one of the most frequently-parodied things in pop culture for the next two to three years. If this episode came out in May I might have pondered if this shot was deliberate. 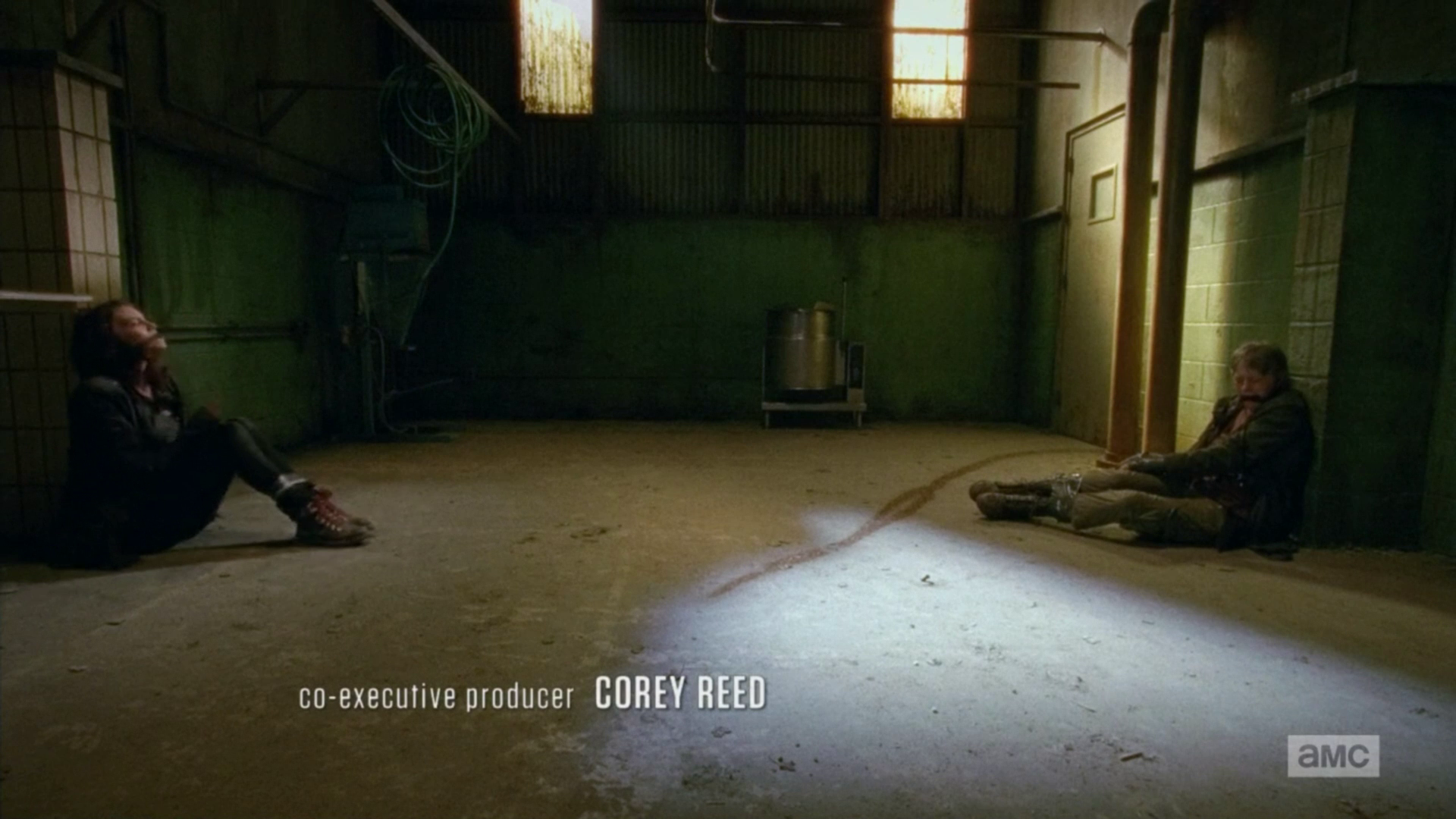 But this must’ve been: the place they’re about to be held is the same building where Saw was shot, and the room they’re led to is even the exact same room where the majority of the movie took place. Carol and Maggie were placed in this room, fittingly bound and gagged, and were told “don’t even TRY anything” before being briefly left alone inside. Guess who immediately tries something? 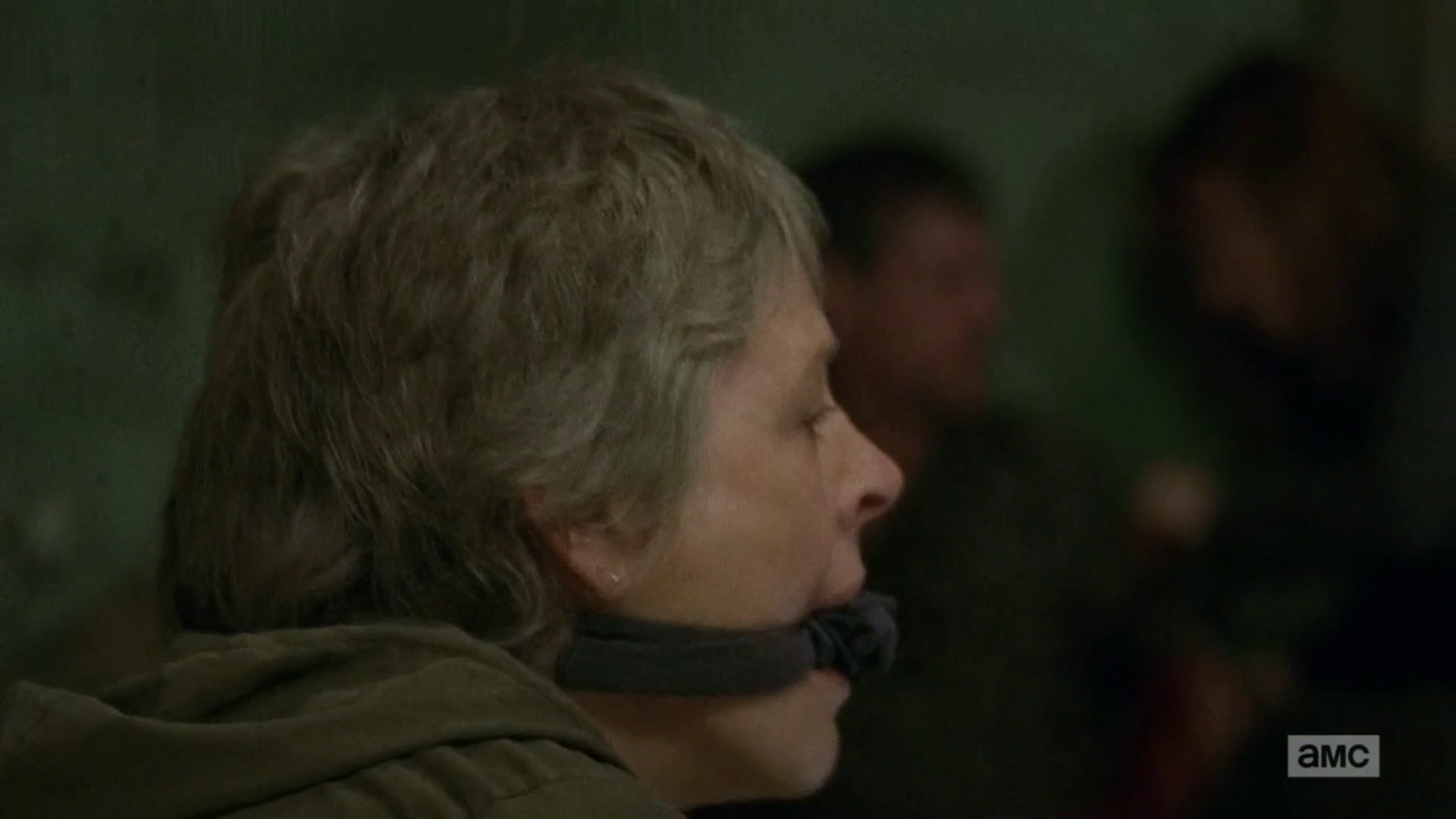 While Maggie works at cutting the duct tape binding her hands together with a sharp wall corner, Carol has a different plan…a more confusing, more obscure plan that’s so strange I can’t tell if it was even a plan at all. Someone left a rosary on the floor, so Carol grabs it between her bound hands….and then she starts hyperventilating.

Is this an act to make them drop their guard, or is Carol really losing it? She’s a tough old cookie, but she’s also very concerned for Maggie’s baby and she regrets every kill. Melissa McBride confirmed on Talking Dead that her act was intended to be ambiguous. We may never know. We can make guesses, though: Carol uses the rosary to act uncharacteristically religious, a side we’ve NEVER seen from her, which would seem to indicate her freakout was a put-on. Or maybe she just really wanted a cigarette. 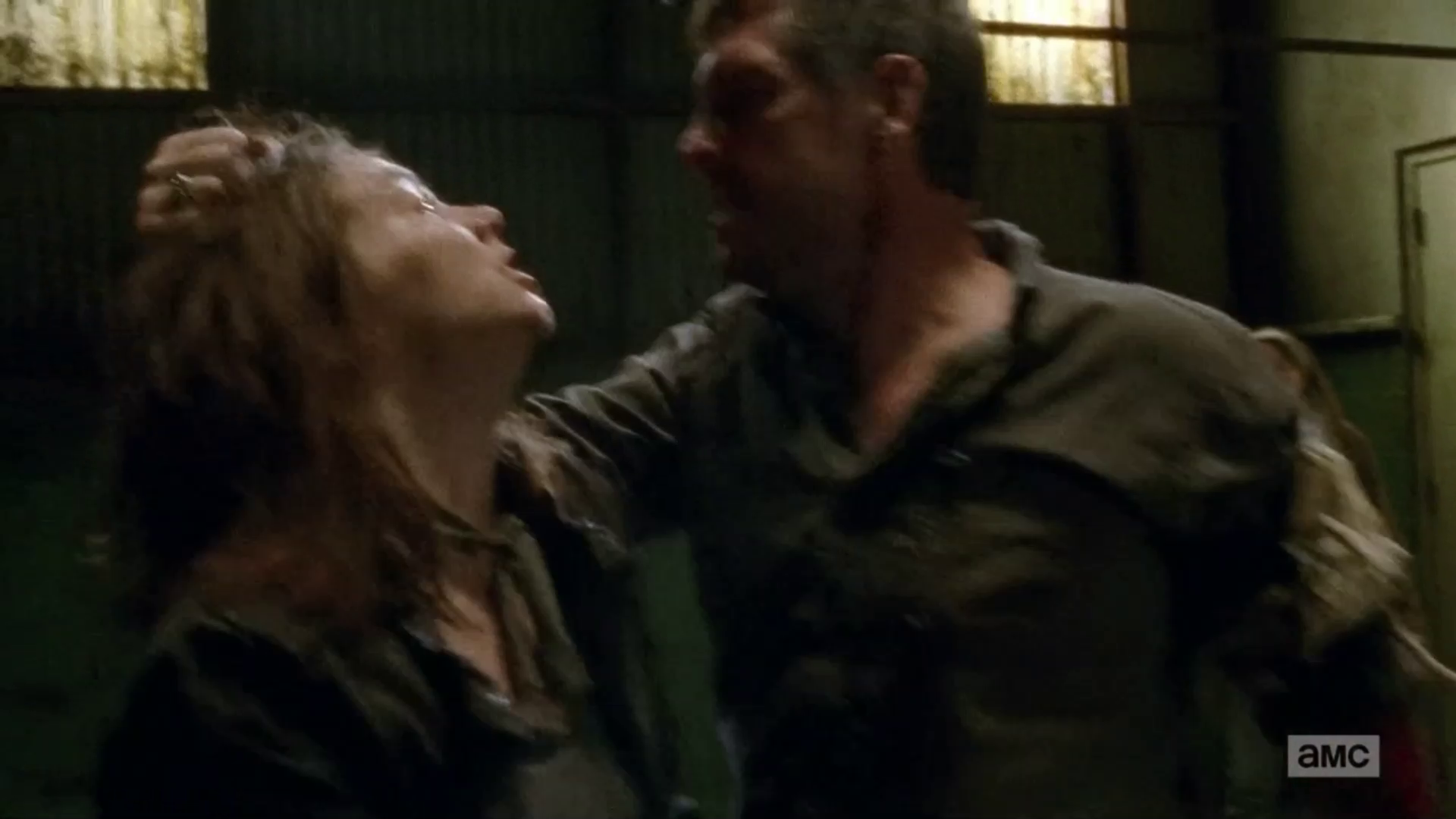 Everyone at the hideout agrees to follow Paula’s exchange plan, except for the guy Maggie shot, who insists at least one of the hostages be executed NOW. He attempts to subdue Maggie, but both she and Carol fight back (without the use of their hands) and eventually Paula ends the fight herself by knocking him out.

Turns out Paula had been dating that guy, but admits she really had no feelings for him. She spins the tale of her life during the dawn of the apocalypse: she lost her husband and four children because she couldn’t be there to protect them. Instead at the moment of chaos she was stuck with her boss at work. The moment she knew civilization was over, she simply shot him and continued on. This brings to question what kind of places you can work that will allow you to carry a gun. She mentions living in DC, which would indicate the FBI, but no….she also mentions being a secretary. There are gun-toting secretaries in DC. Okay. 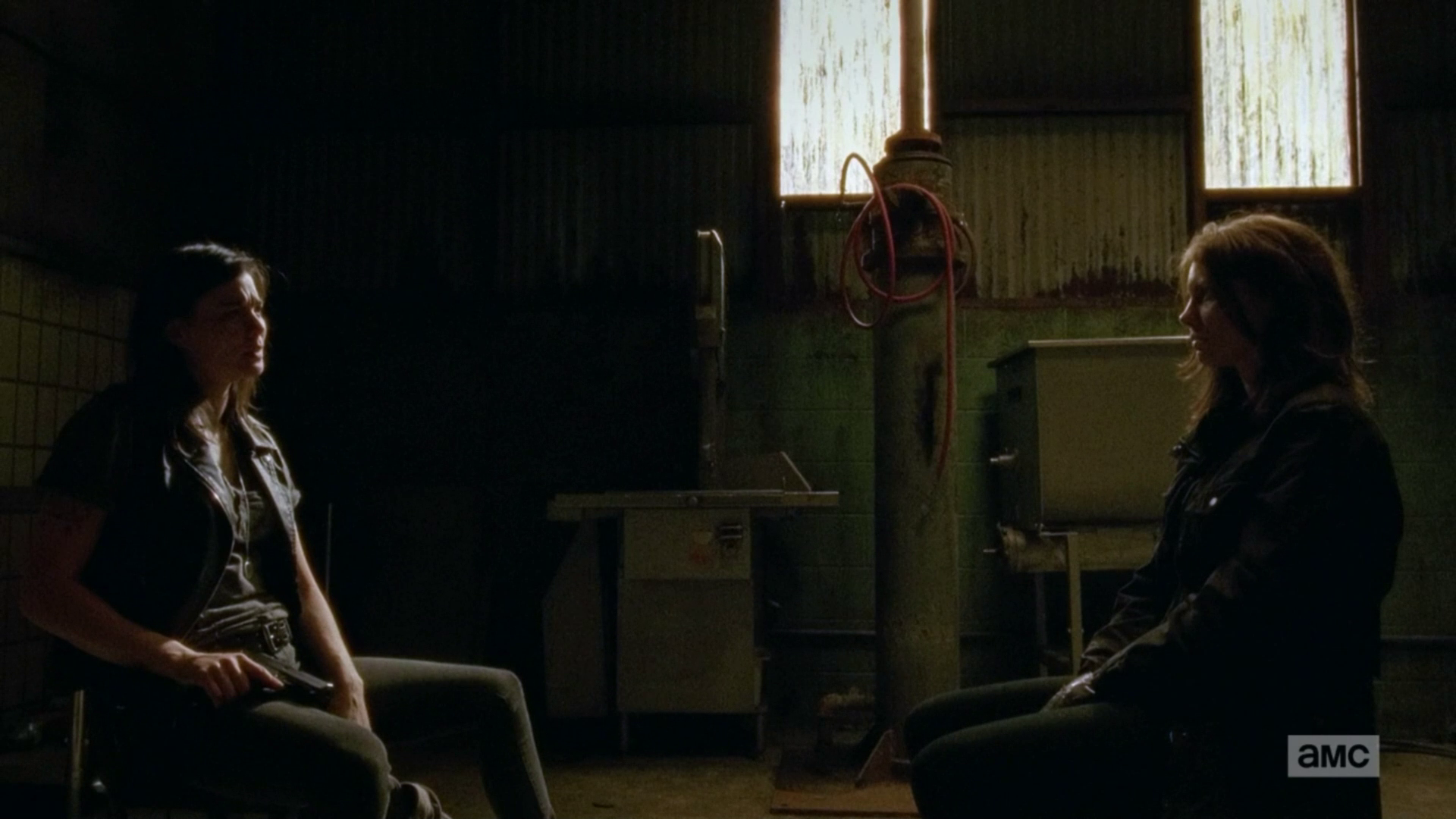 Paula takes Maggie into the other room and tries to get the location of their living space out of her. They don’t currently sport the appearances of people on the run, so she knows they’re hiding something good. Maggie would never betray the Alexandrians and says as much, adding that the Saviors are “the bad guys.” Paula says from her perspective, the Alexandrians are the bad guys, which makes sense at first when you think about a ton of people coming out of nowhere and executing all your co-workers in their sleep. However, the Saviors are some of the most viciously mean people the show has ever aired. It’s more of a pot-kettle thing. 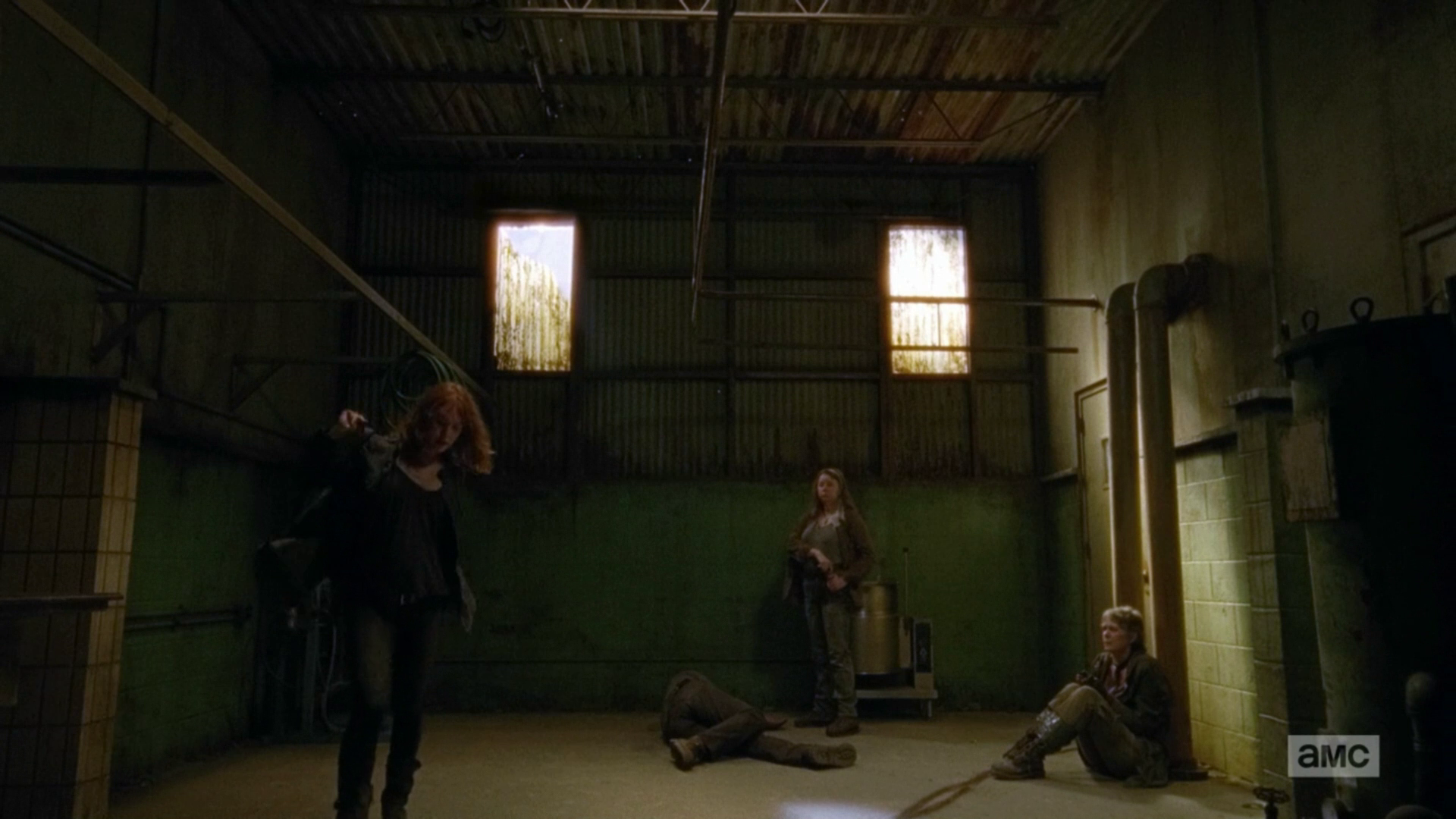 Rick contacts Paula again via the walkie-talkie. Paula is wondering if the exchange should even happen — what if they get ambushed? Should they do the ambushing first? Now alone, Maggie undoes the final bit of duct tape and makes her move. She grabs Carol, frees her, and their make their way down the hallway, only to find the exit blocked by some Walkers and the guard. 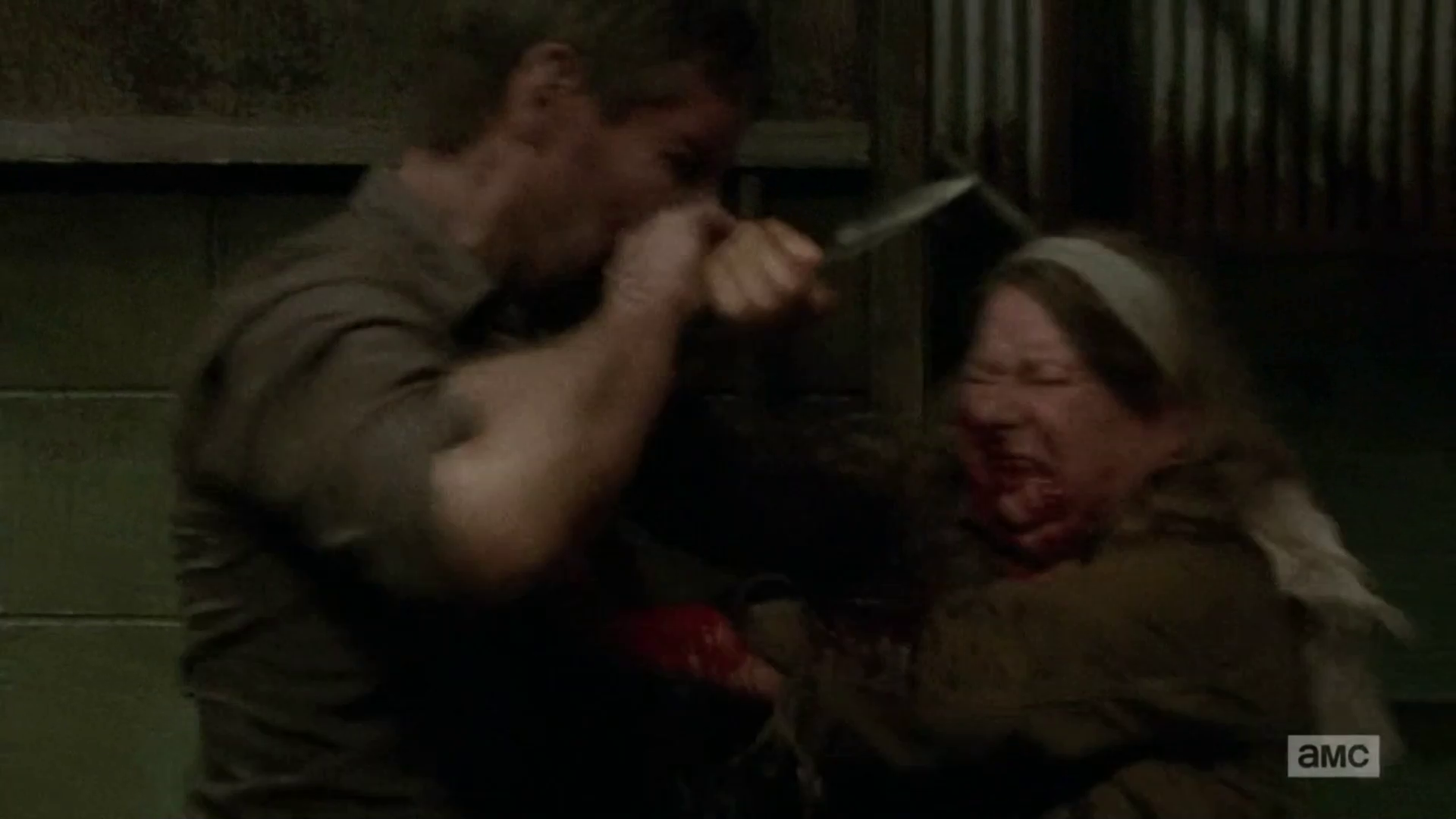 Doubling back to the room, they discover Paula’s former boyfriend has died already and it won’t be long before he rises as a zombie. They use this to get rid of their guard — when she comes back expecting she gets a faceful of Walker teeth instead. 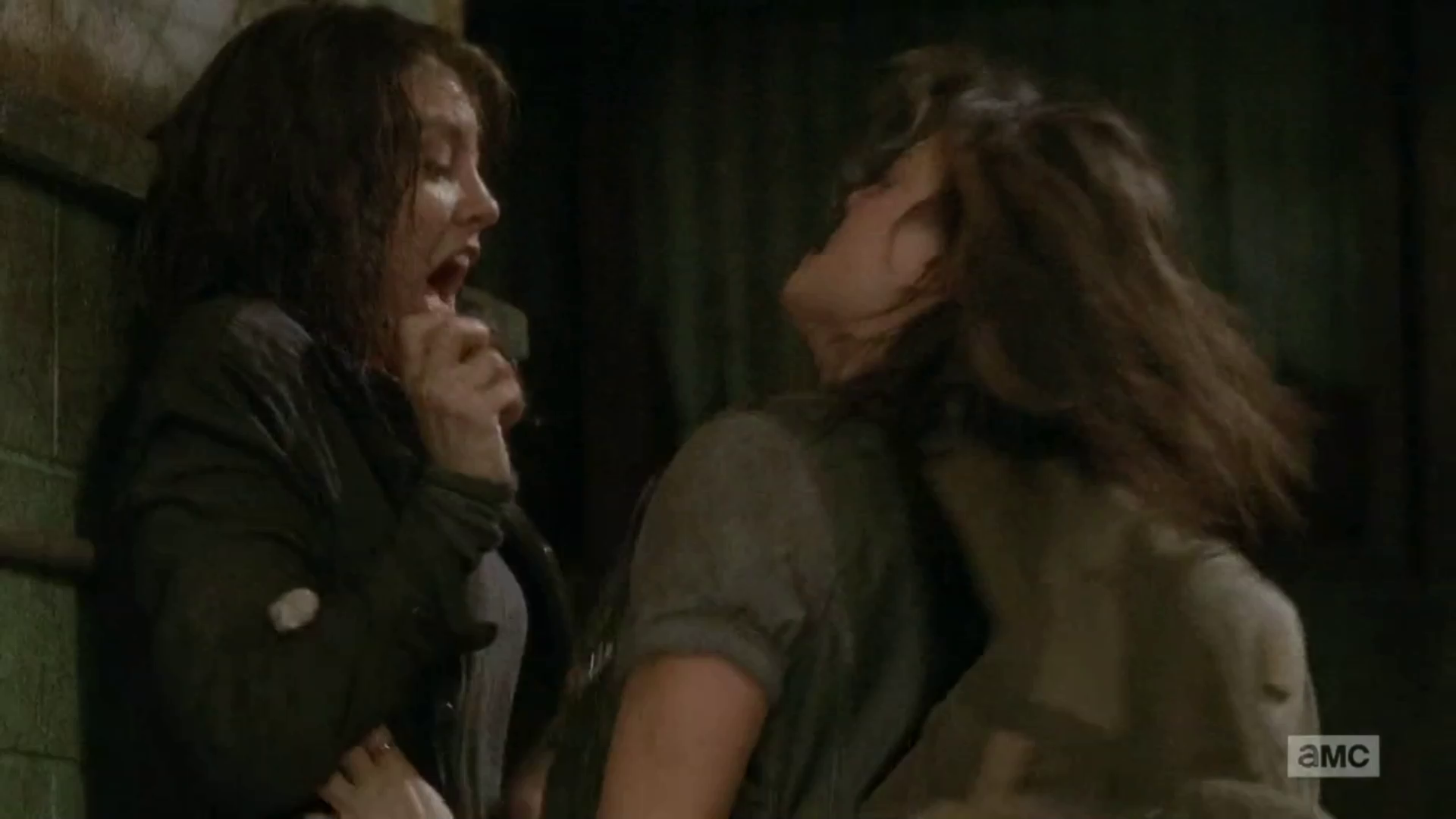 Racing back to the hallway with the Walkers, Carol and Maggie discover the path blocked by one angry Paula. Carol has been trying to be merciful throughout this entire ordeal, and gives Paula plenty of warning that she will shoot the pistol she’s pointing at her. Paula ignores her, believing she won’t, and attacks Maggie. Paula slashes at Maggie with a knife, grazing her belly baby area, which drives Carol into pulling the trigger.

But Paula’s still going! This is one of the more memorable fight sequences of the season. “If you could do ALL THIS….” Paula slurs out referring to the entire escape, “….what were you so AFRAID of?” Carol replies nervously, “I was afraid of THIS,” while still holding the trigger at Paula. Then THEY get into a fight, slamming each other against the wall repeatedly. Carol ultimately skewers Paula on a Walker-trap spike, and the other Walkers are more than happy to take care of the rest. 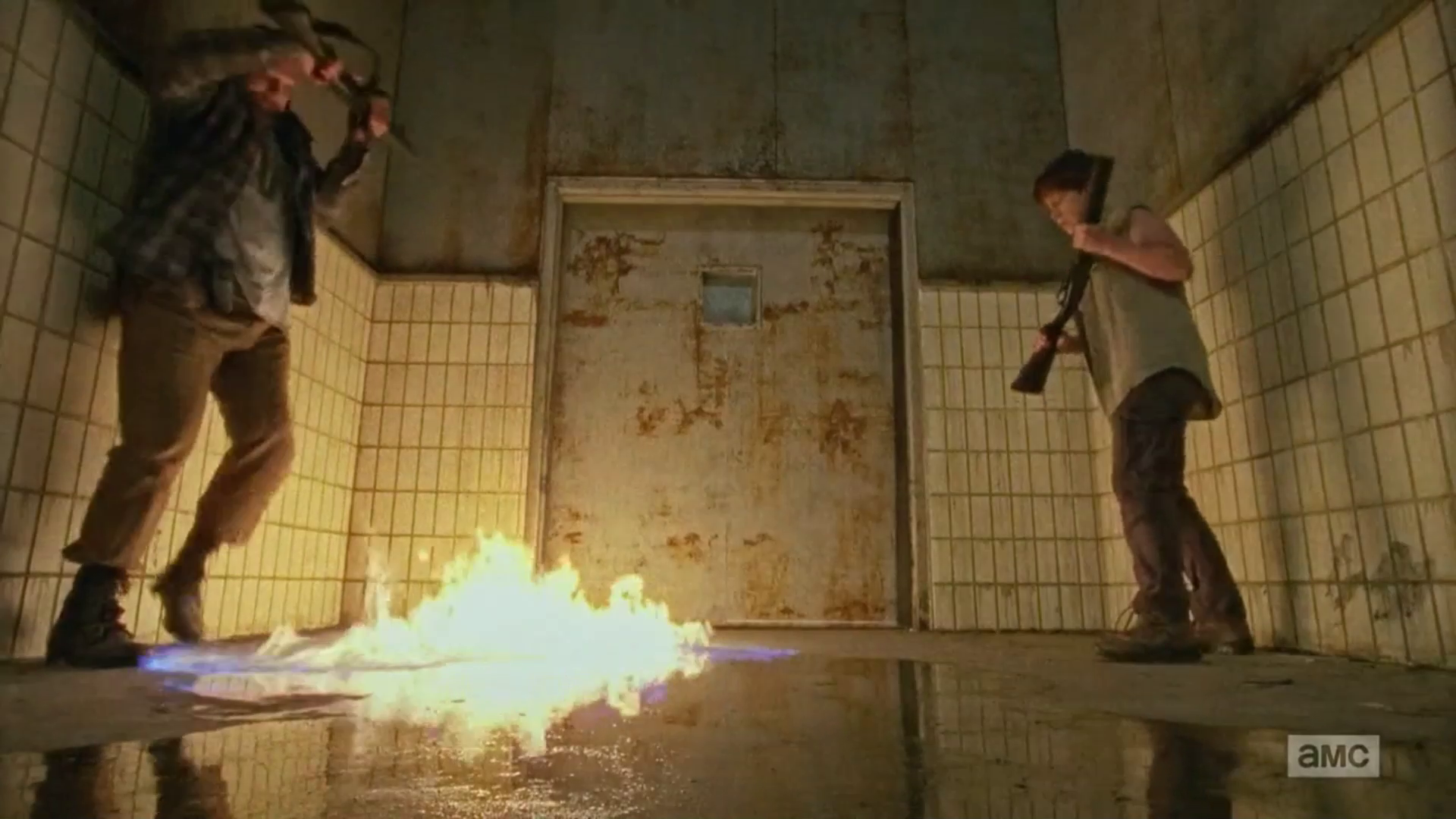 Maggie and Carol dispatch of the rest of the Saviors by pouring gasoline all over the floor, luring everyone in with noise, then throwing Carol’s lit cigarette into the room and slamming the door shut. It’s at this point Daryl and Glenn start coming through with their guns, to find the entire situation resolved. It’s clearly taken a toll on Carol, though. 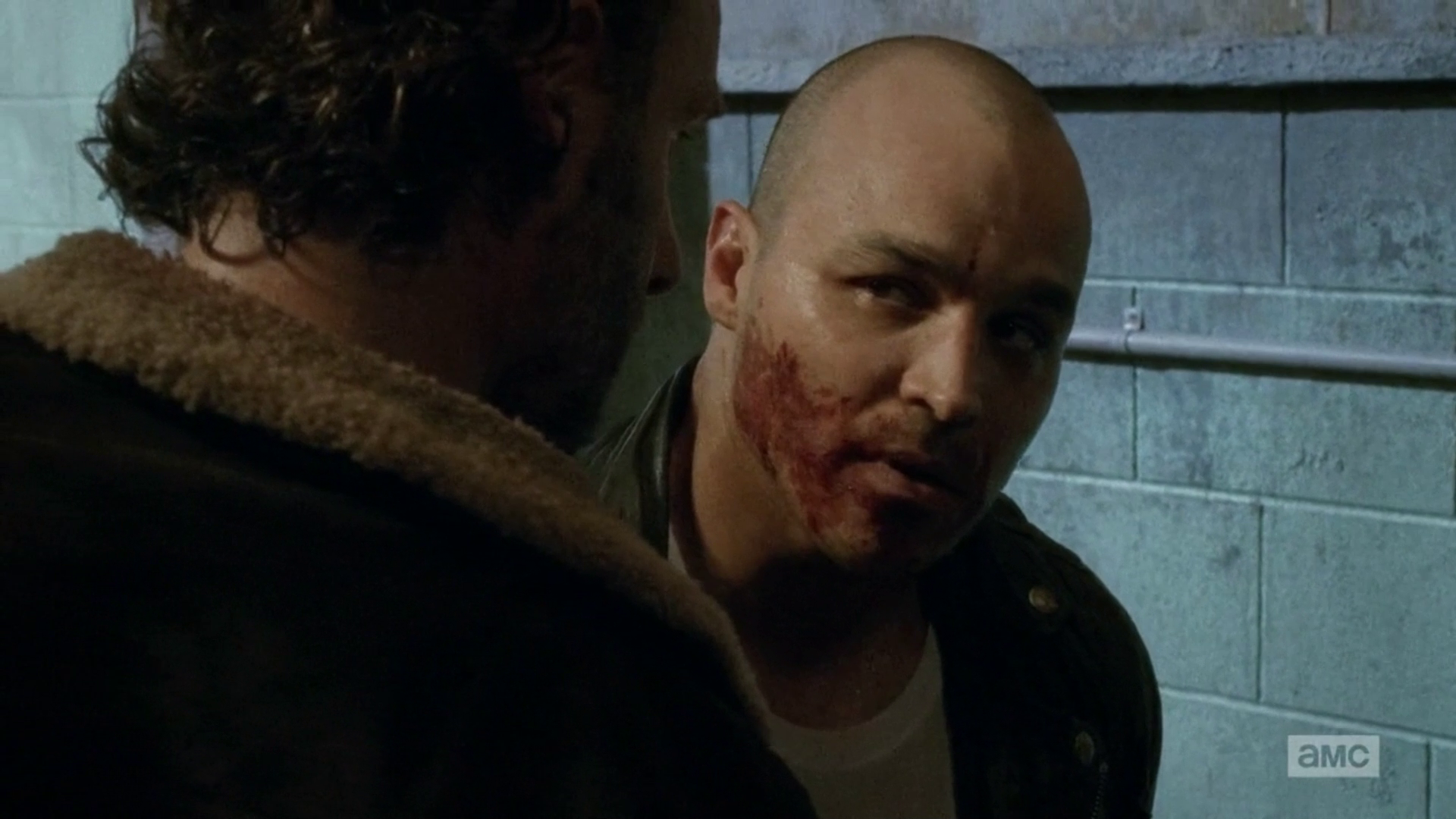 Now that everyone’s gone except for Team Rick’s hostage, Rick points out his life is useless unless he can provide more information…like the location of Negan. The man says, “Oh, I’m Negan,” which immediately gets him a bullet to the face. He’s not Negan, of course, and he had to know claiming that identity could end his life. The fact that so far every Savior has been willing to die for Negan, despite mounting evidence of his cruelty, gives him more of a chillng presence — and we still haven’t even met him yet.