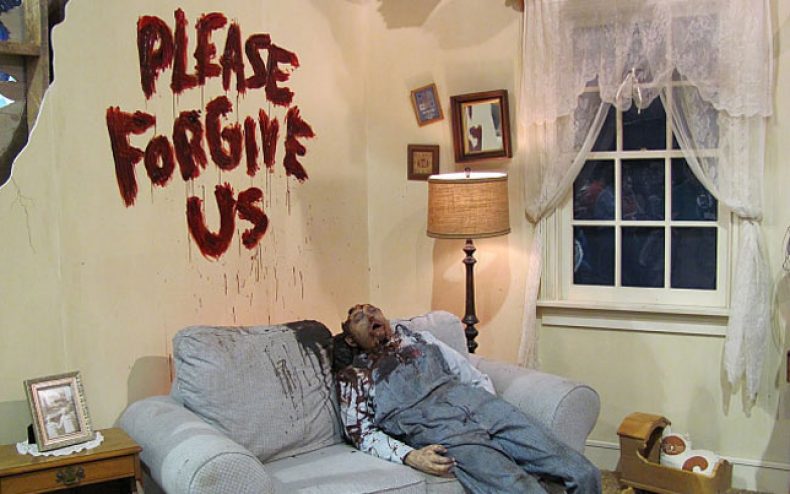 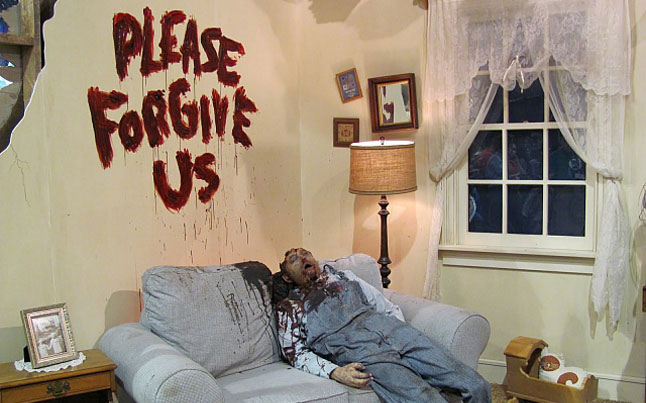 f you haven’t had a chance to read The Walking Dead comic but want to know how the comics differ from the TV series this should help fill in the gaps, and I will try to pass over the more trivial things. For instance, in the comics Rick puts on a pair of jeans and a t-shirt before leaving the hospital, but in the show he travels to his house in his hospital gown. This information is neither important nor interesting, so who cares?

2. In the comics we never see Shane visit Rick in the hospital, but in the TV show we witness him standing by his partners side.

3. The little girl who is carrying the stuffed animal that Rick shoots in the beginning of episode one, “Days Gone Bye”, doesn’t exist in the comics.

4. The TV show delays Rick’s first encounter with zombies a bit – in the comics he finds a barred door (but it doesn’t have “Don’t Open – Dead Inside” written on it) opens it, and finds a cafeteria full of zombie walkers.

5. Morgan’s zombie wife is not in the comic books. Rick never gives Morgan a radio in the comics, but he does however give him a police car.

6. In The Walking Dead comics when Rick enters Atlanta, he does see a tank, but neither he nor anyone else ever crawls under it or hides inside of it. After being pulled from his horse, he just runs, and is suddenly grabbed and pulled into an alley by Glenn. He also never drops his bag of guns.

7. After Glenn rescues Rick in the comics they do not meet up with other survivors inside the city. They just sneak past the walkers and run back to the camp, which is where Rick finds his family and where he first meets everyone (except Glenn, who he met in the city, and Shane, Lori and Carl, who he already knew). The campsite is also MUCH closer to the city – only a few hundred yards away – so they escape on foot.

8. In the comic books Shane never tells Lori that Rick is dead. He just helps her and Carl get out of the city and on the road. Then in a moment of desperation and weakness, Lori sleeps with Shane once and immediately regrets it. In The Walking Dead TV show it seems to be an ongoing relationship.

9. There are a number of people on the TV show who do not exist in the comics. Merle, Daryl, Jacqui, Morales and his family, and all the people in the campsite who never had speaking roles were killed in the zombie attack. There is a large black former-football player named Tyreese in the comics, but no “T-Dawg”. I assume they are in fact the same person.

10. Carol is in the comics, but she is not married to Ed, she is a single mom. There is a character a little like Ed, but his name is Allen and he has 2 twin sons, and a wife named Donna. He is not an abusive husband or father like Ed was in the TV show.

11. In the comics, because Rick didn’t drop the guns and Merle doesn’t exist, Rick never leads a second group of people into Atlanta. On one occasion, Glenn leads Rick to a gunstore where they become trapped, and it is then that they smear themselves with zombie guts to sneak around the zombies. Again, the campsite is close enough to the city for them to escape on foot.

12. Because no second group goes back for Merle, or the bag of guns, they never meet the Vatos or visit a nursing home. In fact, they don’t meet any other survivors until they reach Herschel’s farm.

13. In the comics, shortly after they meet, Dale warns Rick that no one likes or trusts Shane, and that Shane is in love with Lori.

14. In the comics, Rick and Shane get into an argument about whether they should leave the campsite. Shane punches Rick in the face. Shortly afterwards, Rick and Shane are alone in the woods and Shane pulls a gun out and prepares to kill Rick. Carl (who is already carrying a gun at all times) has secretly been following them, and he shoots Shane through the throat killing him almost instantly. Only after Shane is dead do the others decide to leave camp.

15. Absolutely NOTHING from the final episode of season 1 “TS-19” happens in the comics. This episode is the largest deviation from the original story thus far, except maybe for Merle or Daryl being there. The characters on The Walking Dead TV show already know FAR more about the disease and its effect on the rest of the world than the comic book characters do. There has never been any mention of other countries in the comics, and no one has been able to tell them anything about what the disease is, how it started, what it does, etc. No one has tried to reach the CDC.

16. In the comics the survivors quickly begin calling the walkers “zombies”, and admit it seemed silly to say that word at first, but soon it felt more natural. Frank Darabont, Robert Kirkman, etc., have made it clear that this will not happen in The Walking Dead TV series. In the universe of the TV show, the word “zombies” doesn’t exist, and neither do the movies of George Romero.

While The Walking Dead TV show and the comics do differ in a lot of areas, I am glad it does.  What fun would it be to know every next step, every next move, and know exactly what would be coming next.  I want to thank Fatbrett2, one of our community members for this contribution. You can see his original post here in our forum.  The Walking Dead season 2 premieres this October 16th.

A big fan of The Walking Dead television series. In my spare time I enjoy blogging and simply hanging out. Oh and lets not forget, Go NY Giants!
You might also like
EpisodesThe Walking DeadTV Series