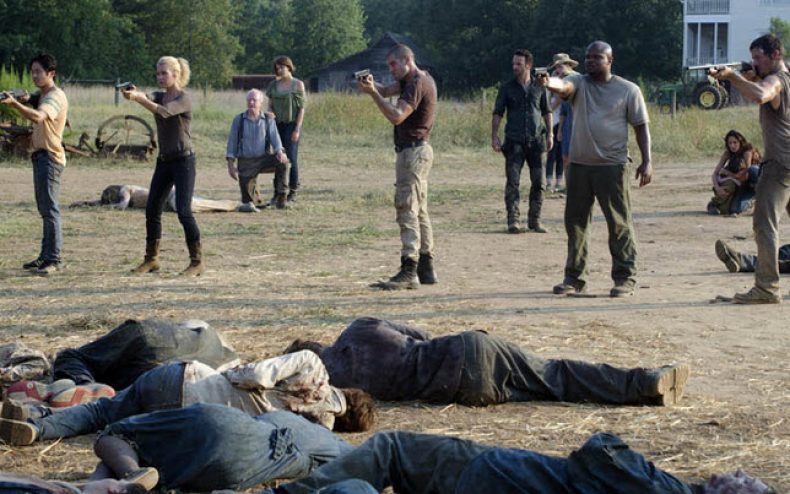 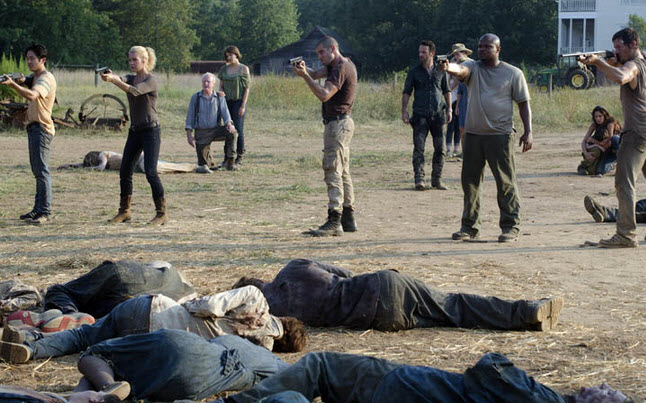 Everyone has an opinion on gun control, and oddly enough, a zombie apocalypse—sort of like The Walking Dead…er wait, that IS The Walking Dead!–is often brought up in political analogies. Assuming the world was overrun by a zombie plague, it’s safe to say that the local police and government forces would not be answering 911 calls. You would be free to hoard as many firearms as you desire or need—and frankly, even the arsenal you’re thinking of right now probably wouldn’t even be enough.

That said, we thought it would be prudent to review some of the firearms used on the show, as well as open the forum to public opinion. Thus far on The Walking Dead, we’ve seen a Colt Python revolver, used by Otis, Daryl, Shane, Oscar and Rick. Daryl, Patricia and Lori used a Colt Detective Special, while other characters found refuge in packing a Smith & Wesson Model 442, Colt Official Police revolver and a Taurus Model 85.

For pistols, we have a Glock 17, used to waste zombies by Leon, Lambert, Shane, Daryl, T-Dog, Glenn, Andrea and Rick, as well as a Beretta 92FS, sharp enough to be used only by the elite of Rick, Carl and Andrea. Brother Merle has also found use of a Browning Hi-Power and a Walther P99. When it comes to rifles, former Sheriff and undisputed tribe leader Rick Grimes has only used a Remington 700 VLS, though Merle found a Winchester Model 70 useful, and T-Dog found a Browning Automatic Safari Rifle.

Mossberg fans, you’re represented by Shane and Rick, who chose a model 590 since the “Days Gone Bye” episode, while other Mossberg models were also used by Glenn, Maggie and Tony. Then you have assault weapons, like the M4A1, used by Rick Grimes, Hershel Greene and Merle, with the shadier types (namely the Governor) embracing the Cold Law Enforcement Carbine model. Last but not least (and definitely most controversial) you have submachine guns, the likes of which have only been possessed by Caesar Martinez and other Woodbury survivors.

Of course, manufacturer names aren’t that relevant if you’re scrounging for whatever you can find, in whatever abandoned shack you come across. What about the questions that really matter? Like what type of guns should you keep and what should you let go? (Assuming your clan of cowering children and teens can only hold so many bags for you)

You really want to have a gun that’s not too heavy and has light, easy-to-load ammunition, as this will be important for stockpiling and for weaker members of your crew who may have to cover you. Then again, smaller handguns are also more prone to damage, or at the very least, do suffer from lack of accuracy.

A lot of zombie apocalypse experts out there (oh yeah, they’re just counting the days till this really happens…) say that sub-machine guns are not that practical, considering that they have low accuracy and waste a lot of bullets. Pistols may be more dangerous for the shooter than larger guns, since they only work at closer range. Shotguns are also loud and will possibly alert more zombies to your location than they will kill. Rifles may very well be the most efficient choice, though all of this is relative to your own personal shooting style.

Of course, not everyone thinks guns are effective weapons…we all know Daryl prefers crossbows!