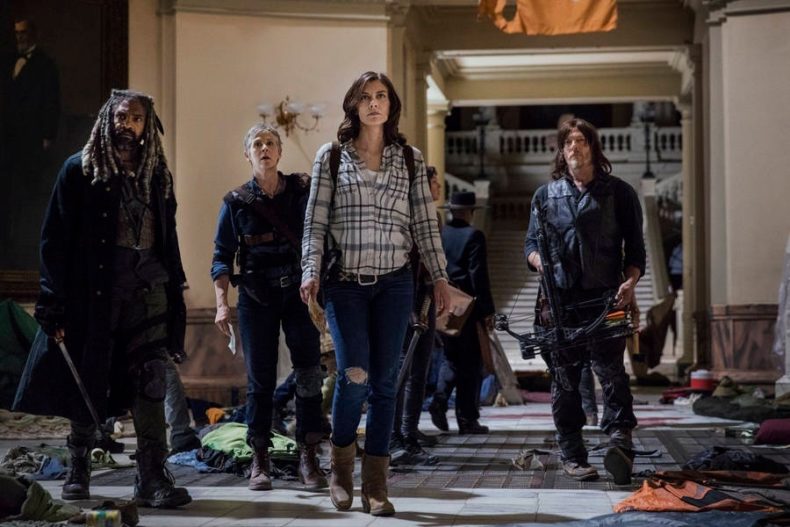 Don’t expect much action from TWD when Season 9 begins this Sunday. After several relentless seasons of struggling through zombie hordes and militaristic societies led by jerks, the show is taking some time to breathe and return to how things were in the original season — a focus on characters and relationships, not on immediate danger.

Executive producer Greg Nicotero is very excited about TWD’s new direction. “They have real conversations, conversations that you give a *** about. ‘That’s what Rick is feeling! That’s what Daryl is feeling!’ They’re actually talking, and it’s the first time that we’ve done that in a long time, where there are not those ellipses of dot dot dot, and you leave it hanging out there. ‘I don’t know what’s going to come after.’ I’m like, ‘After what?’ Now we’re getting the chance to see these people interact with each other, and they care about each other. I loved it.”

Part of this resting period is a natural side effect of jumping the story forward 18 months, but another factor is the change in showrunners. As Angela Kang takes the reins for the first time, she’s looking to course-correct the series and fix common fan complaints. “I think a lot of times, we do our own internal reckonings, like ‘To us, it feels like we’ve done a lot of this type of story. What’s a new way to tell this?” she said to Variety. “What are some of the things that we miss doing?’ And a lot of times that lines up with things that fans or critics have been feeling. So we’re not trying to chase something but we have a responsibility to ourselves and our viewers to not rest on our laurels.”

Early reviews of TWD’s season premiere confirm what Nicotero and Kang have been saying. It’s a newer, more subdued TWD this season…though with Rick Grimes’ inevitable death on the horizon, time will tell how long the utopia lasts.