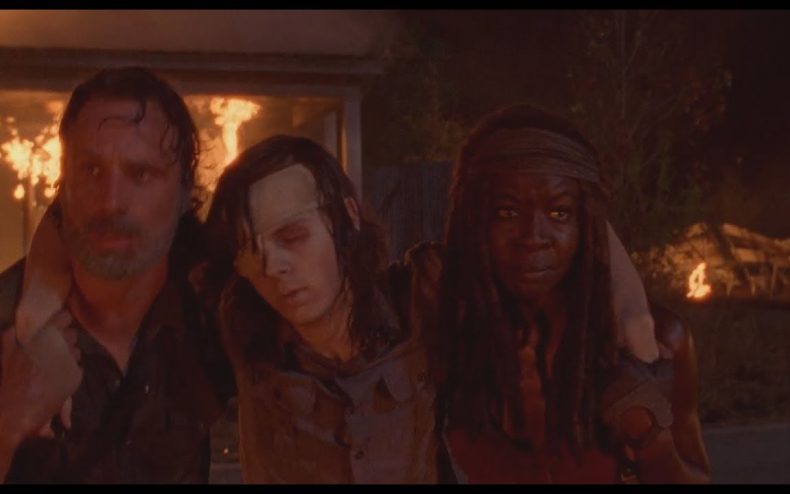 The return of The Walking Dead is now within one month….what’s going to be happening in the back half of Season 8? Besides that one event we already know about?

Given that nothing was resolved in Season 8A, it’s a foregone conclusion that the war between the Alexandrians and the Saviors will continue to escalate, even if there’s not much of an Alexandria left anymore. Between his house and his son, Rick can’t be feeling cheerful at this point. “[Rick has] lost the things that he’s fighting this war for,” actor Andrew Lincoln said to Comicbook.com. “That has a huge effect on him and it changes him irrevocably.”

AMC has released two separate teasers full of half-a-second images from the midseason premiere. The thirty second spot is below:

The more substantial ninety-second spot is unfortunately a Buzzfeed exclusive that’s only available through their Facebook page, so if this buggy video stops on you without warning, reload the page and try again. Blame Zuckerberg. (Also, if it doesn’t appear embedded here at ALL, use this link.)

The longer trailer reveals Rick’s game plan: assemble what’s left of his party and make a last stand at the Hilltop. It shouldn’t take long for Negan to find them there, but knowing this show the fight will probably take seven episodes to happen. Once it does happen, though, AMC is strongly implying that this will be the climactic battle of the conflict and the end of the war.

The Walking Dead returns February 25th at 9 on AMC, starting with a super-long goodbye episode for Carl.