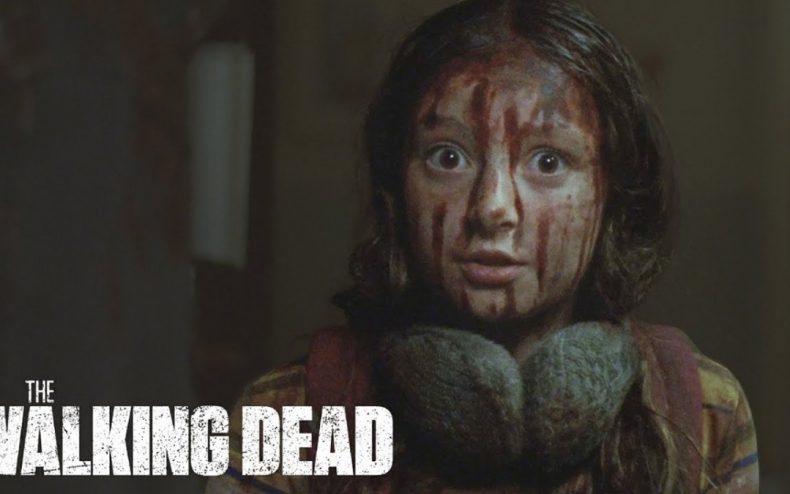 AMC has released two clips from next Sunday’s episode of The Walking Dead. Wanna check ’em out?

This episode starts with a woman blacked out on her steering wheel, evidently having just crashed. The constant noise of the car horn starts attracting Walkers, and meanwhile we’re wondering, “have we seen this woman before? Who does she become on the show?” Food, that’s what — she’s a victim in seconds, in one of the more gruesome zombie kills we’ve seen from this series.

The real stars of this sequence, Alpha and her daughter Lydia, shamble in, attempting to blend with the Walker crowd, their faces disguised by hoodies. They’re new at this sort of thing, though, and their attempts don’t fool the Walkers for long. Running for their lives, they barricade themselves in a building, where they meet…B. Yep, it’s most likely a flashback origin episode.

The second clip we can’t actually embed because it was exclusively given to the site TVLine, so you’ll just have to read our description and then head over there. It’s a flashback sequence showing one of Alpha and Beta’s first conversations. In fact, this is the moment they first came up with their Greek nicknames.

“So if I’m B, what does that make you?” Beta asks.
“A,” Alpha replies.
B gives her a look under the mask like, “what makes YOU think you’re special you get to be one letter above me?”

Then A attempts to remove the mask. B doesn’t like that!

A new episode of The Walking Dead airs this Sunday at 9 on AMC.

Six Million Games Played in Destiny Alpha
Be the first to comment!
Leave a reply »