The Walking Dead Exec. Producer Gale Anne Hurd on Season Five (No Spoilers, at All) 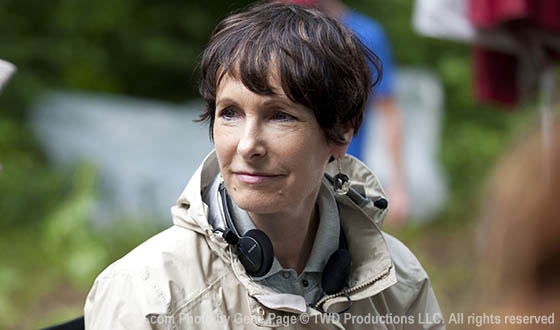 So what does The Walking Dead Executive Producer Gale Anne Hurd have to spill about Season Five? As you might expect, not much! That’s good for people who want to avoid spoilers, I guess.

She does describe the shoot as sunny and pleasant.

“It feels like being in elementary school the first day you’re back after summer break. Everyone is so excited and they’re hugging… we really do have one big family. We’ve already, not surprisingly, worked with a few walkers. We’ve really hit our stride now. All of our crew members are completely prepared, our cast is top-notch and confident, the scripts are coming in and we have such fantastic directors,” Hurd said.

She drops that one of the shots in the first season uses some fancy equipment.

“Well, we try not to be too flashy with some of our camera work, but we had a super technocrane and being a technology buff myself, it’s really fun when we get to use the big toys,” Hurd said.

And that this premiere episode had “a little extra time” to shoot.

And that’s about it, except that Hurd says she is looking forward to the reaction from the fans, good and bad.

“The connection, the feedback, the love — and a little bit of hate sometimes — is why we’re sitting here sweating in Georgia. We do it for the fans,” she said.

Season Five Facts from The Walking Dead’s Gale Anne Hurd (Mild Spoilers)
Be the first to comment!
Leave a reply »