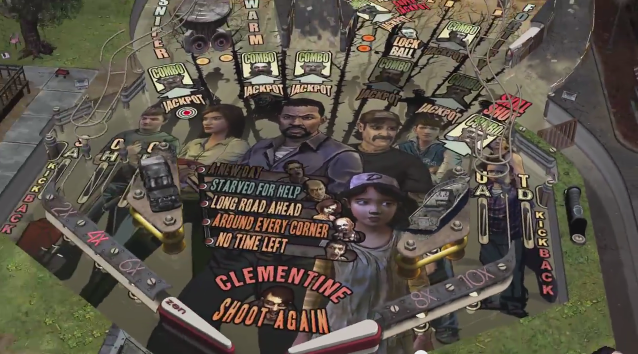 Today Telltale Games and Zen Studios announced the mashup game that, I would guess, not many people asked for. The Walking Dead Pinball.

Just judging from the teaser trailer, however, the results look like a lot of fun. The pinball table follows season one of Telltale’s The Walking Dead Game, with elements on the table representing Clementine, walkers, all of your favorites.

It might also be the first pinball table to try to incorporate deep moral choices. According to a post on Zen Studios’ blog:

“Scenarios include choosing who to save and who to leave behind in a walker attack, solving problems and raising morale within the group, searching for food and supplies, acquiring important tools, and navigating through the herd amidst an oncoming walker breach.”

Can the wonderfully emotional story that drew people in to Telltale’s series still matter when all your worried about is the ball draining to the side. Probably not. But that’s not necessary to make a fun pinball game, and The Walking Dead flavor is welcome.

Zen has a great track record with similar adaptations. As a video pinball fiend I can vouch for their pinball tables based on Star Wars and Marvel Comics.

Now if we can get Zen on the line to make a deal with AMC to make a version based on the show. Imagine a Daryl’s motorcycle skill shot. Loading Rick’s revolver. And trying to get Carl in the house for an extra ball.

The game is coming this summer for PC, mobile, and various consoles.

The Walking Dead is Getting a Real Pinball Machine
Be the first to comment!
Leave a reply »