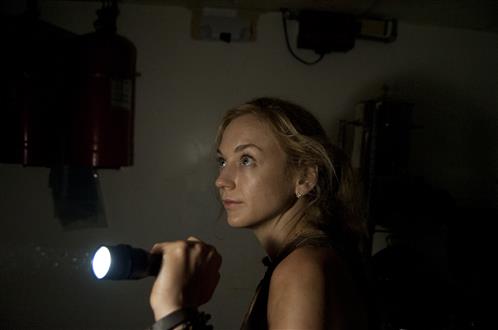 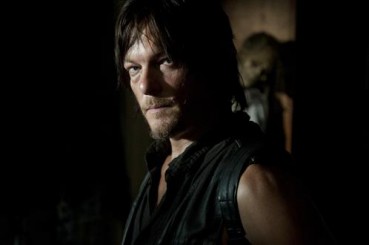 The twelfth episode of season four of The Walking Dead aired tonight, with “Still“.  If you’re a fan of the Bethyl (Beth & Daryl) relationship, tonight’s episode will leave you with many feelings. In fact, the entire episode is centered around these two characters and their mission to find alcohol and forget the world is in chaos, if only for a bit.

The episode starts off with the two characters running out of the woods. Walkers are chasing them and they need a place to hide for the night. This temporary haven comes in the form of a car’s trunk. Talk about cozy — perhaps a little too much so! When daylight breaks, they climb out, scavenge the area for supplies and head off to make camp. Beth puts the items to quick use, setting a fire with a broken mirror and building a sound trap with the rims of the car.  Daryl attempts to hunt for food. He misses a squirrel, breaking an arrow in the process but worry not, he makes up for it by killing a snake.

Beth decides that her new mission is life is to go on an epic quest for alcohol, becoming the heroine of tonight’s adventure! Of course, the conversation is one sided as Daryl ignores her for dinner. “Okay, enjoy your snake jerky,” she says before stomping off and calling him a jerk under her breath. She encounters a few walkers in the woods but distracts them by throwing a rock. She turns around to find Daryl, thinking he’s decided to come along instead, he leads her back to the camp.  This angers Beth, “I’m not staying in this suck ass camp. Screw that!” She even flips him off before continuing her search for booze.

The two exit the woods and come across a golf course with a resort nearby. There’s a lot of corpses inside. It looks like a large group of people had tried to make shelter there but it must not have worked out. Several of them had tried to hang themselves and reanimated as walkers. Daryl finds a bag and begins filling it with large quantities of money and jewelry that had been laying around. Beth questions why he even bothers keeping it. Walkers begin banging on the door so they move further inside the resort.

Beth finds a bottle of alcohol on the top shelf in a supply closet. Victory! Or so you’d think. Unfortunately, all her clanging about drew the attention of a nearby walker. She’s forced to fend him off, breaking the newly acquired bottle over his head before stabbing him with her knife.  She sarcastically thanks Daryl for his help. He reminds her that she said she could take care of herself. On the wall is a handmade message, “Welcome to the dogtrot.” Your guess is as good as mine.

They search further into the resort and come across a room filled with clothing. Beth changes into a nice, clean shirt while Daryl stashes more money. Propped up in one corner is the emaciated corpse of a woman with her shirt torn. “Rich Bitch” can be read on a sign hanging around her neck. This bothers Beth and she begins to cover her up. Daryl doesn’t understand why it matters because the woman is already dead. He tosses a shirt over the woman’s head and walks off.

A grandfather clock begins to chime, drawing the attention of several walkers. Daryl decides to let some of his pent up frustration go by killing them. He even goes so far as using a golf club on the final one, spraying coagulated blood all over Beth’s new shirt. Soon, they come across a bar but the only thing Beth can find is a bottle of peach schnapps. Daryl decides to play darts choosing to ignore the dart board in favor of portraits instead. Beth looks for a clean glass but all of them appear covered in blood. Nothing seems to be going right for the poor girl and she breaks down and cries.

This causes a reaction finally from Daryl. He grabs the bottle of peach schnapps and slams it down on the floor. “Ain’t gonna have your first drink be no damn peach schnapps!”, he says fervently. The two end up leaving and going to a house that Daryl had found earlier that year with Michonne. In a shack out back, he pulls out a crate of jars filled with moonshine. “That’s a real first drink right there,” he tells her. Beth tells him that her dad always said that bad moonshine will make you go blind. He reminds her that there’s nothing to see out there anyway.

We learn that Daryl used to live in a place much like the run down house they were in. It doesn’t seem like he had much of a childhood, or a life for that matter. Beth offers him some moonshine but he declines as someone has to keep watch. She teases him by calling him Mr. Dixon and soon he relents and joins her in a drink. They even attempt to play a drinking game which doesn’t go well. In fact, it goes horribly wrong. It reminds Daryl how messed up his life was and how different they are. He even ends up making a jab at her attempted suicide before taking her outside to teach her how ‘to use a crossbow’. He fires a few arrows at a walker and misses. She takes a knife and stabs it in a head which seems to anger Daryl more.

The two end up arguing and Daryl says some hurtful things but Beth stands her ground. At one point she even tells him that all he sees when he looks at her is another dead girl, because she’s not like Maggie, Michonne or Carol. She tells him that his attempt to stop caring about anything is bullshit. That deep down, all he is — is afraid. At this point we see Daryl break down and begin to cry. He blames himself for the attack on the prison because he gave up searching for The Governor. Beth hugs him from behind.

At night, the two seem to be getting along again. Beth jokes that she realizes why her dad quit drinking, “You end up wishing you could feel like this all the time, and that’s bad.” Daryl admits that he becomes a dick when he’s drunk.  He tells a story about about a time when he hung out with his brother and a tweaker. They got drunk before noon, and Merle got high on top of it. While watching cartoons, the tweaker got mad at a comment Merle made and punched him. Daryl went to defend his brother and had a gun pulled on him. Merle, in turn, pulled a gun on the tweaker. Daryl thought he was going to die over a dumb cartoon about a talking dog. Beth asked how it ended. He tells her that he was punched in the stomach and vomited, causing everyone to laugh and forget about the fight.

And that’s when Daryl finally admits to what he used to do before the apocalypse. He just drifted around and followed Merle. Beth tells Daryl that she’s going to be gone someday. That he’s going to be the last man standing. She also tells him that he’s going to miss her so bad when she’s gone. Daryl tells her that she should get inside.

“We should burn it down,” she says, looking back at the house.

“Still” ends in a blaze of glory, literally. The two grab the leftover jars of moonshine and begin pouring it all over the house. They head outside where and Daryl hands Beth a large stack of cash to light.  Soon the house is ablaze, a symbolic reminder that the past is in the past. Beth flips the house off, and after a playful nudge, Daryl joins her.

What a great episode! Earlier I referred to Beth as a heroine and the reason I did so is because we get to take that role tonight. Of course, this means that Daryl might have been the damsel in distress. Now now, don’t take offense by that. I do not mean it in the traditional sense. We all know he’s strong and he can defend himself, but emotionally, he was crippled. He had all but given up and one simple quest for alcohol turned into so much more. Beth managed to get him to open up. In fact, I’d say my overall opinion of Beth has changed thanks to this episode. I now see her as a much stronger character. Not everyone is going to be a genuine bad ass in a zombie apocalypse. We need the characters with humanity to keep us in line and on the path of goodness. I believe that Beth Greene has taken up her father’s cause, regardless of if she knows it or not.

Beth, Hershel would be so darn proud of you! Keep on carrying on, little miss! “Still” was absolutely brilliant! Possibly my favorite episode this season! What did you think about tonight’s episode? Why don’t you discuss it on our forums!