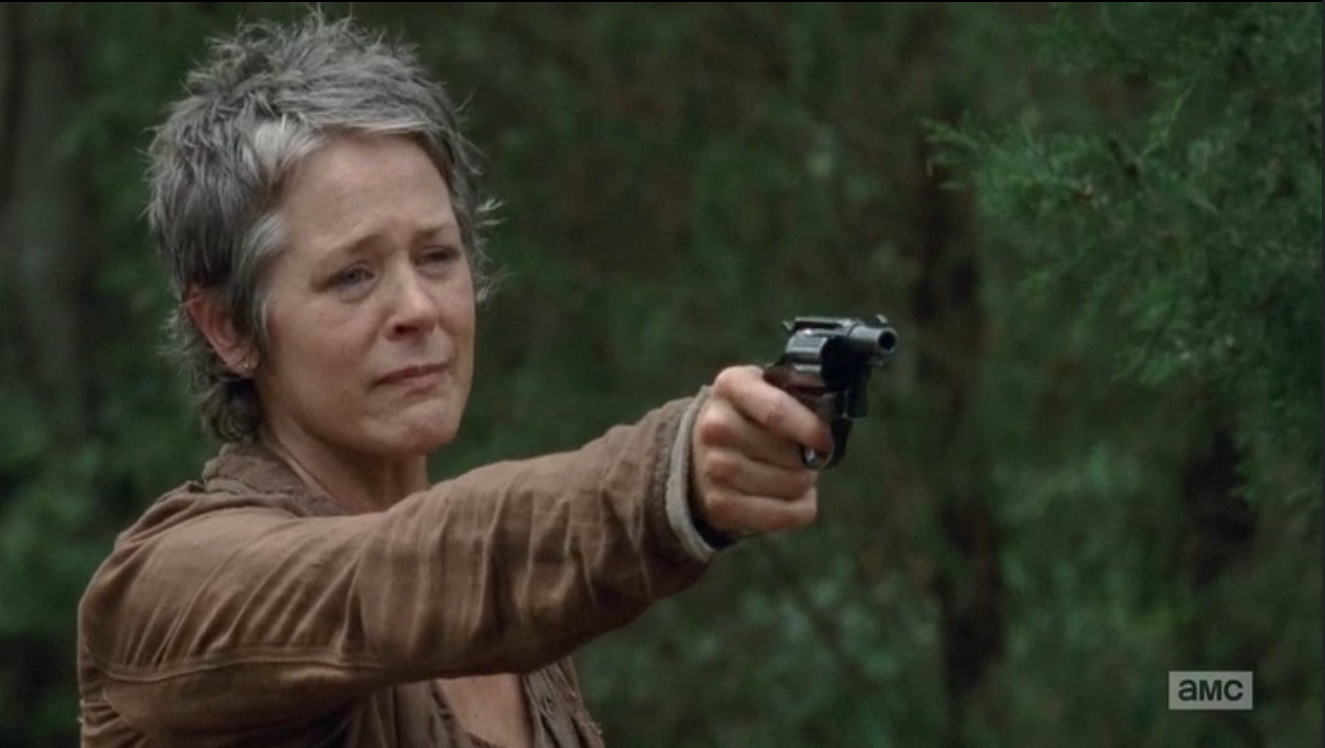 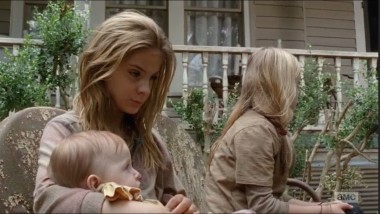 We are nearing the end of the fourth season of The Walking Dead and each new episode delivers a swift stab to the heart. In tonight’s episode, “The Grove“, we reach resolution with a two key story lines.  One is with Lizzie and Mika and the other with Carol and Tyreese. I hope you brought out the tissues!

The episode starts off with a scene that will be revisited again later. We hear the carefree laughter of a child. Lizzie is running around in a yard playing a game of chase, or perhaps hide and seek. It seems innocent enough until you realize it’s not with her sister. Instead, her playmate is a female Walker. Before we can find out what happens next, we must travel briefly into the past.

Carol watches over a sleeping Tyreese, Mika and Judith. Lizzie joins her, determined to be helpful. She tells Carol that she was the one to save Tyreese, explaining that she shot a man and then she shot a woman. She shows regret at shooting the woman in the brain, most likely because she couldn’t come back as a Walker. She begins asking Carol some questions, the most important one being if she had any kids. Carol tells Lizzie about Sophia, “She didn’t have a mean bone in her body.” Lizzie asks her if that’s why Sophia wasn’t around anymore. Carol tells her yes. The two are drawn to the sound of Tyreese having a nightmare.

The next morning, Lizzie finds sap on a tree. Carol applies it to the knife wound Tyreese had acquired earlier in the season, hoping it will help fight any infection. She tells Tyreese that Lizzie sees Walkers differently than they do. To the child, they are similar to living people. Tyreese asks her if Mika is the same. Carol tells him that the younger child is worse because she doesn’t have a mean bone in her body, alluding to the fact that her fate may be similar to Sophia’s if she doesn’t change.

Still heading to Terminus, the group stop to take a break. Carol and Mika head off to search for water while Tyreese remains with Lizzie and Judith. While waiting, Tyreese spots a Walker coming their way. He pulls out his hammer intending to kill it, but the Walker stumbles and becomes stuck in the tracks. Lizzie walks up to Tyreese and tells him that sometimes you have to kill them, but sometimes you don’t. This is the first of many creepy comments that will come from her this episode.

While searching for water, Carol tells Mika that she needs to toughen up. Mika admits to freezing up at the prison when the Governor attacked.  She doesn’t want to hurt anyone, including Walkers. She would prefer to run.  Carol tells her that her daughter ran and it wasn’t enough. It’s why she’s tried to teach the children to defend themselves at the prison. Mika stays firm in her pacifistic belief. she really doesn’t want to hurt anyone. She even feels sorry for the bad people because they probably weren’t like that before.  They dtumble upon a small pecan grove. Mika happily tells Carol that everything works out the way it’s supposed to. In the distance, a trail of smoke can be seen.

They reclaim the other half of their group and return to the grove. Carol and Tyreese leave the girls in front and head inside to clear the house of any Walkers. Lizzie is visibly upset at this. Mika tries to remind her older sister that they aren’t people anymore. They’re just dead. This only upsets Lizzie further. “You’re wrong, all of you,” she states angrily. A Walker charges out of the house at the girls and surprisingly, Mika kills it. Lizzie begins to have a panic attack. “Just look at the flowers,” Mika tells her sister, helping her calm down.

Inside the house, Lizzie tells Carol that she doesn’t always understand but she’s trying. Tyreese notes that he isn’t used to being in a living room, or in a house for that matter. Mika tells him to relax. She would like to live there. 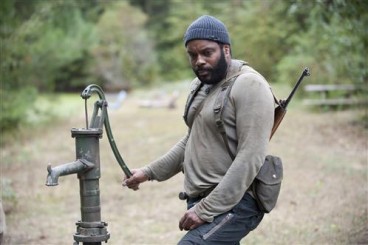 Things quickly calm down and return to normal. Tyreese tells Carol that he agrees with Mika. Maybe they can stay and live there. He trusts the group he’s with and he doesn’t know if he can get that anywhere else. Meanwhile, Mika follows Lizzie to the tracks and catches her feeding a mouse to the Walker stuck there. She tells her older sister that it was fine to pretend at the prison but they need to be realistic now. Walkers are dangerous, they are not pets. Lizzie tells Mika that she never pretended. She understands them. They want her to become one of them. She extends her hand, flirting with the idea of letting the Walker bite it.

A large group of Walkers burst out of the woods, startling the girls. Their skins are charred, having been burned from a fire. The girls run towards the house, calling out for Carol and Tyreese. Mika falls, nearly becomes a meal for one of the Walkers but Lizzie helps her just in time. Once safely on the other side of the fence, Tyreese, Carol, Mika and even Lizzie begin shooting and killing all the Walkers.

That night, Lizzie tells Carol that she had to stop them, that she knows what she has to do now. Carol mistakenly takes this as a sign that Lizzie is coming around. Mika joins them and the three of them bake pecans. It’s beginning to feel like home for them.

The next morning, Tyreese and Carol head out to hunt deer. Carol tells him that they can stay if he really doesn’t want to go to Terminus. He tells her that he isn’t ready to be around other people yet. He has dreams about Karen. He sees her every night, sometimes he even forgets she’s dead. His comments begin weighing heavily on Carol.  They fail to bag a deer and turn to head home. Carol attempts to lighten the mood with a really bad joke. “What’s the difference between beer nuts and deer nuts? Beer nuts are a dollar seventy-nine. Deer nuts are just under a buck.” 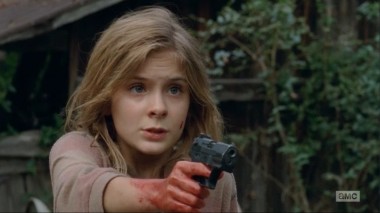 What greets them upon their return is absolutely horrific. Lizzie is standing over the lifeless body of Mika, knife still in her bloody hands.  “Don’t worry, she’ll come back. I didn’t hurt her brain.” She draws her gun on the two adults to keep them from nearing her sister, “We have to wait.” Lizzie tells them that she intends to turn baby Judith into a Walker as well, but Carol talks her out of it by pointing out that the baby can’t even walk yet. “You’re right,” Lizzie agrees. Carol asks for the gun, promising to tie Mika up and wait for her to turn. With Lizzie now disarmed, she tells them to go inside. When they are out of sight, she pulls out her knife.

Tyreese tells Carol that he’s given Lizzie some lunch. He also made sure she had no sharp objects or weapons. He had found a shoebox filled with mice in her room. When he asked, Lizzie admitted to being the one that fed the Walkers at the prison and also dissecting the rat. She said she was just “having fun”. He wondered if Lizzie had been the one to kill Karen and David but Carol rejects that theory, pointing out that Lizzie would have let them turn instead.

Carol blames herself, saying she should have seen it coming. She knew that Lizzie had a problem but never to what degree. Tyreese tells her that it’s not her fault. They two discuss possible options now that they know what a threat Lizzie is. Carol even suggests that she take Lizzie away but in the end, the problem remained. Lizzie can’t be around other people.  Because of that, there’s only one real solution.

Carol tells Lizzie that they need to talk and the two go for a walk. Lizzie senses that something is wrong and asks Carol if she’s mad at her. An emotional Carol tells the child, “I love you Lizzie, and everything works out the way it’s supposed to. Look at the flowers, Lizzie.” An equally distraught Lizzie does as she’s told, turning her back to the mother figure she adored and admired. Carol aims the gun and shoots. The two sisters are buried side by side in the yard.

That night, Carol is sitting at the table with Tyreese. She quietly slides her gun over to him. She finally admits that she was the one that killed Karen and David. She explains that she wanted to stop the illness. She wanted to stop others from dying. “It wasn’t Lizzie. It wasn’t a stranger. It was me.” Tears are beginning to flow from both sides of the table. “Do what you have to do,” she tells him, accepting the consequences for her actions. Tyreese asks her if it was quick. Carol tells him it was. He places his shaking hand on the gun. Again, Carol tells him to do what he has to do.

The gentle giant that we have all come to love did not disappoint. He raised his hand from that gun and took the harder route. “I forgive you. Never gonna forget. It’s a part of you now. Me too. I forgive you.” It’s clearly not easy for him. Carol quietly thanks him. “We don’t need to stay. We can’t stay,” he emphasizes, a testimony that the trust he had with her is damaged. The next morning, they begin making their way once again towards Terminus.

I cried during this episode. I’m crying now as I write this recap. “The Grove” was an unbelievably emotional episode. While I predicted this very outcome with Lizzie and I had hoped for a resolution similar to the one Tyreese delivered tonight, I was not prepared for the impact I felt from seeing it played out. Tyreese is a man of great power, and certainly he has the cause, pain and capability to respond to the news in the manner the characters expected. Instead, he showed that true strength isn’t always in a man’s fist but in his will.

With only two more episodes this season, I’m both excited and terrified to find out what’s to come! I’m humbled by the talent portrayed by the actors and actresses in The Walking Dead, regardless of their ages. They deliver the writing with such believability that I find myself feeling sorry for characters I didn’t even like. What about you? What did you think about tonight’s episode? Were you happy with the resolutions? Disappointed?

Feel free to discuss tonight’s episode in the forums!