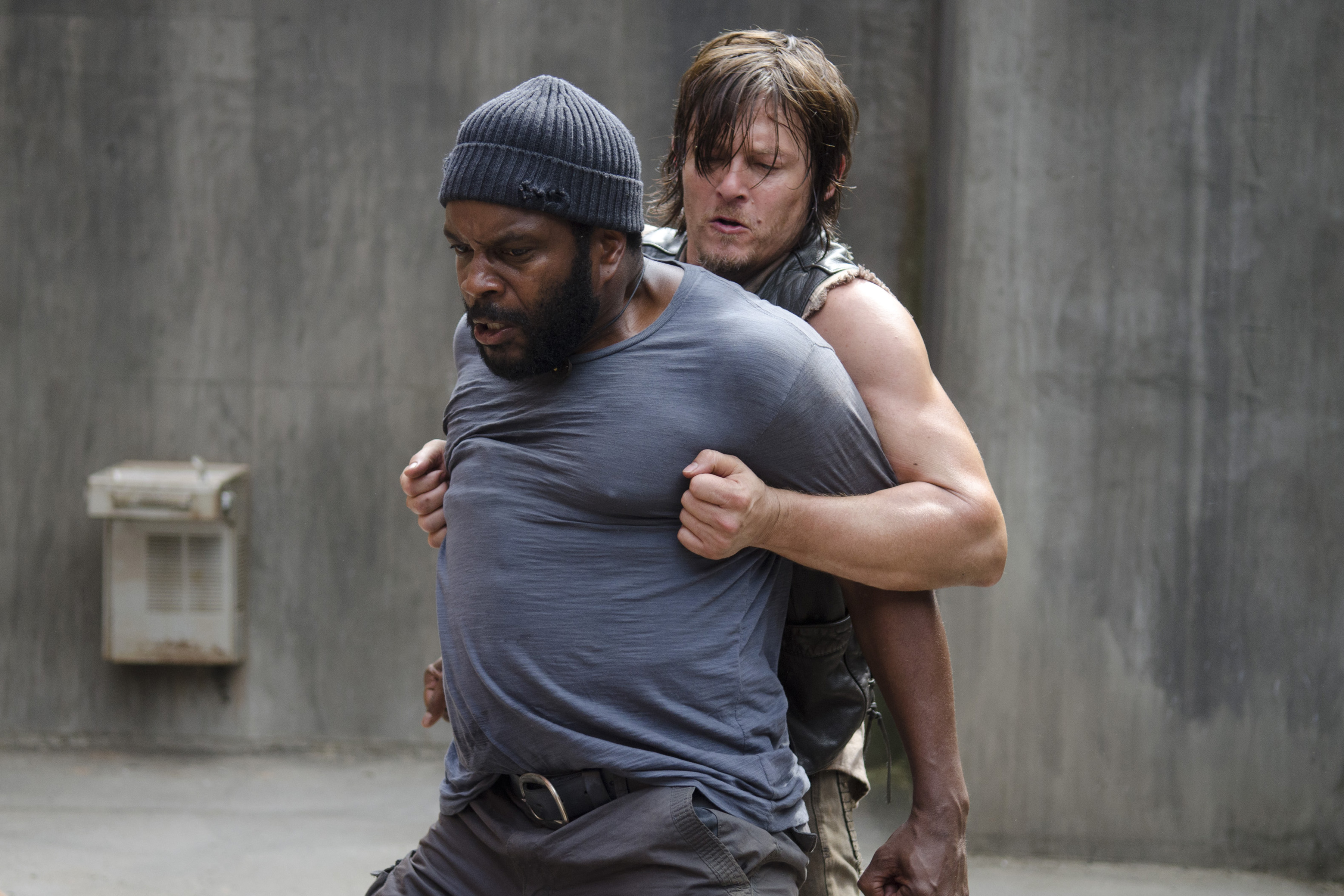 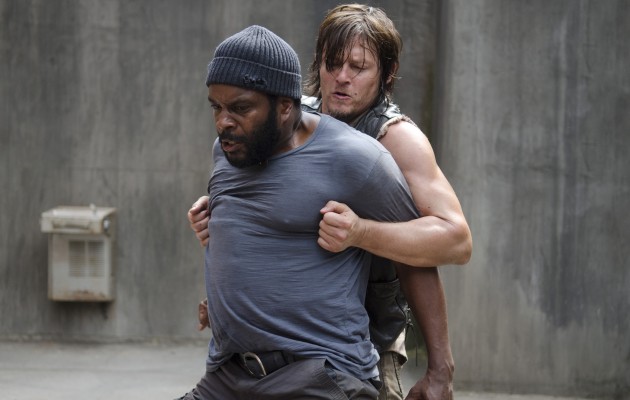 Glenn is digging graves for the fallen and he looks over at Maggie, who is assisting him, and she gives him a comforting smile.

Inside the prison, Tyreese is in despair over what happened to Karen. When Rick tries to comfort him Tyreese snaps and attacks Rick, bludgeoning him to the ground, only for Daryl to break it up. Tyreese shoves Daryl against the wall and Rick gets up and attacks Tyreese, beating Tyreese to a pulp before Daryl drags Rick away.

Hershel and a doctor watch while a man in D block passes away from his injuries, and the latter prepares to stop the man from re-animating as Hershel leaves. Hershel bandages Rick’s hand and tells him it’ll be sprained for at least a week, and warns Rick that the virus is spreading, and the Council will soon convene to decide the best course of action.

Tyreese heads outside to assist Glenn and Maggie in burying the fallen, with Tyreese personally burying David and Karen. Bob walks up and says Tyreese should get his injuries checked, and Tyreese replies by saying he will after David and Karen are buried.

Daryl approaches Hershel, who warns Daryl not to get too close. Glenn suggests that the two bodies being burned may have stopped the infection, but Sasha stumbles into the room, clearly sick and coughing violently. Sasha says she’ll try to make it to Cell Block A to be treated, but she has a nightmarish path getting there, witnessing a turned victim of the virus trying to escape from a locked cell and a woman coughing up blood. She finally makes it to the doctor only to see that the doctor has also been infected.

The Council meets the next morning, and Glenn seems to be developing symptoms of the disease. They decide that they need to get medical supplies, but their only chance is an animal hospital 50 miles away.

Meanwhile, Carol tries to pump water from the river only to get little. She suspects the line is clogged but Rick tells her to wait until the next day. Carol for her part says Rick should apologize to Tyreese.

The Council decides all infected should be quarantined in Cell Block A until further notice, with Carol on guard. Lizzie admits to Carol that she isn’t feeling well and Carol is forced to make Lizzie enter the block, telling her to find Glenn. Carol breaks down in tears.

Rick approaches Tyreese and apologizes for the fight, but Tyreese simply replies that Rick should stop looking at water pumps and instead find the murderer.

Inside, Rick goes to Carl and tells him that to look over the office wing of the prison. While Carl doesn’t much like the idea, he agrees to do so.

Meanwhile, Tyreese is standing guard for the quarantined block, but is asked by Daryl to come with his group on the medical supply run. While Tyreese insists on staying, Daryl assures him that he can do more good looking for medicine with his group. Tyreese goes to a sick Sasha and tells her he’ll be back, before going to meet with Daryl’s group.

In his cell, Hershel looks over a coffee mug and has an idea. He walks through the office block towards the exit, but is stopped by Carl, who tells him he can’t leave. After Hershel tells him he’s going to the forest to obtain something, and that it’s safer outside. Carl offers to go with him and stand guard while Hershel accomplishes his task.

Outside, Carol is tries get water from the drums, only to find there isn’t much left.  Furious over what happened to Lizzie and frustrated over her struggles, Carol knocks over the drums, spilling out the rest of the water, and sits down.

Nearby, Rick is investigating the scene of the burned bodies, when he discovers a bloody handprint on the door.

In the forest, Hershel is collecting elderberries while Carl stands guard. Hershe says he can create a remedy that will lessen the symptoms of the virus or possibly cure it. The two are interrupted by the moaning of a half-decomposed walker laying against a tree, who tries to reach for them. Carl prepares to shoot it, but Hershel reminds him that they have no reason to. The two leave as another walker, snagged by a bear trap, tries to stumble towards them and fails.

Carol goes outside the prison gates to the river, and tries to unclog the hose piping the water into the prison. As she works, several walkers take notice. Carol continues clearing the hose as Rick walks outside and sees what’s going on.  He runs towards the gate, yelling at her to stop and get back inside, but she ignores him and finishes clearing the house. One of the walkers try to attack her, only for it to be shot dead by Rick. Together, Rick and Carl kill several more walkers and barely make it back inside. Rick yells at Carol for not waiting for assistance before doing this.

In the inner courtyard, Hershel walks towards Cell Block A. Maggie sees him approaching the door and confronts Hershel.  Hershel then tells her and Rick, who has just arrived and overheard their arguing,  about his purposed remedy. Rick and Maggie say that Hershel will surely be infected if he enters the block, but Hershel basically says there is no choice, that in order to save lives sometimes you have to risk your own. Hershel serves the doctor and Glenn the herbal tea.

Outside, the supply run group, consisting of Daryl, Michonne, Bob and Tyreese, drive towards the animal hospital. Daryl tries to put a CD into the car’s CD player but instead hears a faint female voice, which distracts him and he nearly hits two walkers on the road. Without thinking, he stops the car and the group find themselves quickly surrounded.

As the horde gets closer, Daryl puts the car in reverse, but winds up getting caught on a pile of walkers. With no choice, Daryl tells everyone to get out and run. Tyreese almost stays behind, but after being urged by Bob, Tyreese dutifully follows the rest of the group on their escape. However, Tyreese is soon surrounded and the others are forced to leave him behind.

A few minutes later, Daryl, Michonne, and Bob stop to catch their breath, only to have Tyreese stumbles out into the open, exhausted and covered in blood. However, he has not been bitten or scratched. The group haul him up and continue on.

Later that day, Rick approaches Carol and says she is brave for willing to risk her life for the sake of others, but Carol tells him it’s just what needed to be done. Rick gets suspicious and he asks her if she burned David and Karen’s bodies. She replies that she did.

A dark and depressing episode, this unfortunately began reminding me of Season 2 of The Walking Dead which I was not fond of. This episode was frankly caught up in itself like the worst moments of Season 2, or, for comparison’s sake, season 4 of Battlestar Galactica and the entirety of Caprica. A lot of manufactured drama, with only a little bit of zombie action to keep you from thinking you’re watching a post-apocalyptic soap opera. That being said, it was cool to see Tyreese’s “prison scene” adapted into the show, albeit in a much different context.

I think that Hershel’s attempt at a cure will be too easy, if it actually works. Considering it was given to both the doctor and Glenn, we’ll probably soon find out.