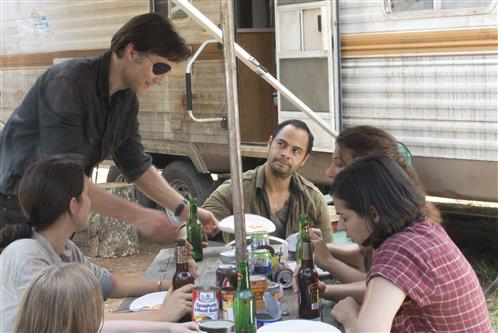 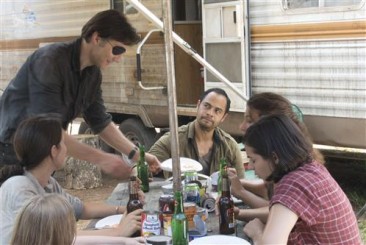 Last week, we got to see a more charming and lovable side of the Governor. In tonight’s episode, “Dead Weight”, we are reminded once again what a villain he truly is as we watch him take over the camp — one body at a time!

The episode starts off with the group being rescued by Martinez. While they are welcomed to the camp, they are expected to follow a couple simple rules. First, Martinez is in charge. I don’t know about you but the Governor never struck me as much of a follower. The second rule was that everyone must do their part. “No dead weight,” Martinez says, setting the mood for the entire episode.

Though he accepts, the Governor is displeased with life in the camp,  living in a dingy trailer with a leaky roof. He tells Lilly that he wanted something better for them. She remains optimistic, expressing her desire to set up a nursing station in the camp. Meghan is still learning chess and Tara meets a new friend and love interest in Alisha. Everyone seems happy —  except the Governor.

Later that day, he heads out on a supply run with Martinez, Pete and Mitch. While Pete seems nice enough, Mitch appears to be a bit of a jerk. “Better watch your ass, One-Eyed Bri,” he tells the Governor as they head towards a cabin. Along the way, they come across two headless bodies with signs nailed onto the chest. One has “Liar” written on it, the other with “Rapist“.  A third body is found laying against the outside cabin wall. “Murderer” is written on the sign nailed to his chest. They deduce that the man had killed himself after killing the first two men. The Governor picks up a photograph of the man with his wife and daughter.

A scuffling is heard inside the cabin. Martinez orders the Governor inside to investigate, following shortly behind. Inside, they come across two biters — the wife and daughter of the man outside — as well as the reanimated heads of the men killed along the way. Why in the world would anyone keep the heads? The Governor quickly dispatches the biters and they begin to scavenge the cabin finding beer and canned food. Score!

They decide to spend the night there and Martinez admits that if it had just been the Governor he had found in the pit, he would have left him there. He wasn’t expecting him to be with the little girl. He also admits that the Governor appears to have changed. We learn a little bit about Mitch and Pete. They both used to be in the army, and that the former had even stolen a tank he had operated while serving. They ask the Governor what he did when the world went bad. He tells them that he survived.

The next day, Martinez and the Governor are on the roof of a trailer, drinking. Martinez is hitting golf balls while the Governor assists him. He tells the Governor that he had to put down Shumpert when he was bitten by a walker.  Out of nowhere, the Governor swings a golf club and hits Martinez in the head.  He then kicks Martinez off the roof of the trailer and drags him to a nearby pit filled with ravenous undead. A struggle ensues and Martinez is pulled in by the walkers. It was only a matter of time before the Governor got tired of ‘following orders’. 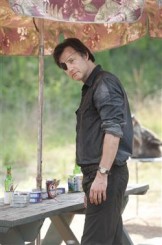 The next morning, the camp is called for a meeting. Pete explains that what was left of Martinez was found in the pit and elects himself leader. This upsets a few people in the group that felt there should be a vote. At one point, it even looked like Mitch and Tara were going to get into a fight. Everyone backs down though and Pete soon heads out with Mitch and the Governor on another supply run.

They come across a group of ten or so survivors. Mitch suggests they attack and take the supplies back to their own camp but Pete objects, opting to hunt instead. On the way back, they see that the new group has been slaughtered and the supplies stolen. Mitch kills the remaining survivor in anger, telling Pete that they should have taken the supplies when they had the chance.

That night, the Governor tells Lilly and Meghan to grab their clothes and pack some food. Tara and Alisha soon joins them and the group leave in a car. Unfortunately, they don’t make it very far as a large group of walkers have become stuck in the mud, blocking the road. They have no choice but to head back to the camp.

If you can’t beat ’em, join ’em! The Governor does the next best thing to leaving. He takes over the camp!

He heads to Pete’s trailer and kills him in cold blood. Then he heads to Mitch’s trailer, but instead of killing him, he offers to recruit him instead. He tells Mitch that he was right in wanting to take the supplies from the camp the day before. You do what you have to, to survive. Though he is initially upset at the death of his ‘brother’, he accepts and the two of them dump Pete’s body into the nearby pond. They tell the camp that Pete died while saving them on a supply run as everyone loves a hero.

Now the Governor is back in charge but he’s still not happy. “Maybe we can find a better place, if we’re willing to fight for it,” he tells the group before heading off towards the pond. He stands there gazing into the water. We see Pete, now a walker, chained to the bottom of the pond. While it’s not as eerie as the televisions filled with walker heads in the last season, it’s definitely a good start! What is it with people wanting to collect reanimated heads anyway?

“Dead Weight” ends with the Governor spying on the prison, finally catching up with where we had stopped with Rick and his group earlier this season. He spots Michonne and Hershel and it’s clear that he still holds a grudge. The episode ends with him aiming his gun at Michonne. 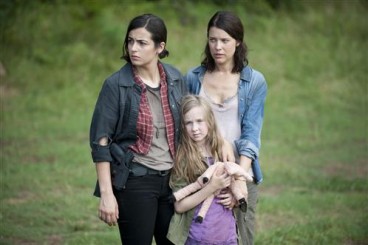 It’s also clear that he plans to take over the prison. As a fan of the comic books as well as the show, I’m looking forward to the impending war. I find it difficult though because I get attached to the characters so easily. I even try to convince myself that the new characters are even more expendable but I find myself wondering what will become of Tara, Alisha, Lilly and Meghan? Will they be casualties of war? Walker food? What about everyone in Rick’s group? If we’ve learned anything in the last three and a half season’s, it’s that anyone can die. Also, did you spot that tank in the preview of next week’s episode? All I can say is, Dammmmmmnnnnn!

“Dead Weight” is definitely leading up to greater and far more terrible things. What did you think about tonight’s episode? Discuss it on the forums!

The Walking Dead Season 4 Episode Titles For Shows 5, 6, And 7
comments
Leave a reply »