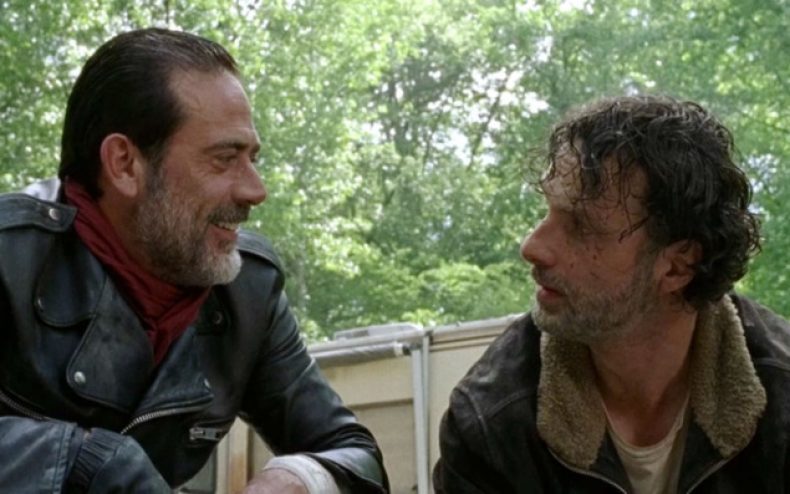 Negan is a cruel, cocky, arrogant bat-swinging baddie with little remorse for his actions. Rick Grimes is the central POV for The Walking Dead’s storyline and thus, must be more virtuous. But not by a large margin, at least not on TWD. Showrunner Scott Gimple told Comicbook.com he believes the two characters have a lot in common.

“I think if we followed Negan we might even be in the same place that we are with Rick where we’re like, ‘Whoa. What you’re doing there seems like the behavior of a bad person,'” Gimple said. “What’s interesting is, I think for Rick’s experience, he’s justified in what he’s been doing. The world has formed him this way and what he’s done has generally been a reaction to being threatened and trying to make sure that his people live. Things are getting greyer and greyer and greyer.”

Rick has had his moments of crossing the line, but I would argue it isn’t because we know his life story that we don’t hate him. It’s because he doesn’t lead a militaristic dictatorship or pound people into hamburger at the drop of a hat. This being said, it would take one Titanic of a tragic backstory to make the audience sympathize with Negan. Gimple has spoken in the past about exploring how Negan got to be where he is…his comments suggest we may see some flashbacks this fall.

Why A UK Retailer Had To Pull This T-Shirt

Carl’s Ambush
Be the first to comment!
Leave a reply »