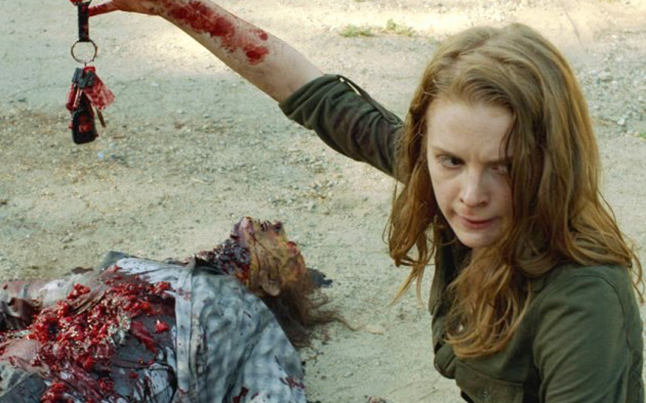 The Walking Dead webisode series is back, and they will return this October. The new webisode series, called The Oath, will be directed and produced by Greg Nicotero. The webisodes are mini web episodes that shed light on the other stories that are happening during this zombie apocalypse.

There are three new Walking Dead webisodes in The Oath series that happen to begin on October 1st. According to AMC, we can have the following to look forward to in the new series.

In the three webisodes (7 to 10 minutes each), the lone survivors of a massive walker-attack, Paul (Wyatt Russell, Cowboys and Aliens) and Karina (Ashley Bell, The Last Exorcism), speed across the countryside, frantically searching for an aid-station, as one of them slowly bleeds out from a wound. Finally coming upon a hospital that has not been overrun at first feels like a blessing, but could soon turn to misfortune, as a seemingly benevolent doctor (Ellen Greene, Little Shop of Horrors) may hide a darker agenda.

The previous webisodes were Torn Apart and Cold Storage, and this new series The Oath shouldn’t be any less exciting. The prior seasons webisodes have won a number of awards including WGA, Streamy, and the Webby Awards.

The webisodes give us a unique opportunity to see other parts of the ravaged world of The Walking Dead while weaving in and out of our show. The crossover between The Oath and The Walking Dead ties in one of the most iconic images from the series, and gives us insights and history to yet another timeline. I had worked with Ashley on The Last Exorcism and brought in Wyatt and Ellen, who rounded out the brilliant cast perfectly. – Greg Nicotero

Season 4 of The Walking Dead begins again on October 13th, and this new Walking Dead webisode series will give us something to check out before the season premiere.

A big fan of The Walking Dead television series. In my spare time I enjoy blogging and simply hanging out. Oh and lets not forget, Go NY Giants!
You might also like
cold storageGreg NicoteroExtras