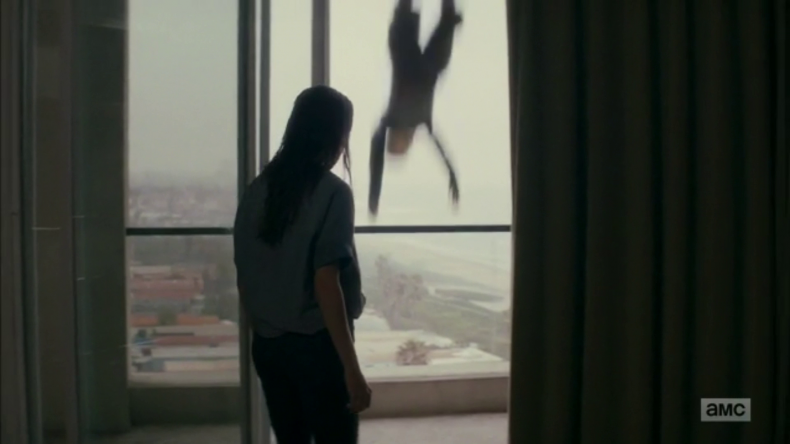 Last Sunday on Fear The Walking Dead, Madison, Strand, Alicia and Ofelia entered the long-awaited hotel the promos have been showing for months. Ofelia exits the story soon after (it’s yet to be revealed for what reason), and Alicia is left alone against an advancing army of zombies. Cinemablend asked Alycia Debnam-Carey how such an experience felt. Even though the actress could see firsthand it was make-believe, it was still unnerving.

She’s alone in a hotel, and that already is just such a creepy idea. When we were filming it, parts of it were all blacked out, and we’d have sectioned off pockets of zombies in each room, and so when I’d open up doors, it was horrible! [laughs] It was like, ‘Oh no, there’s too many of them!’ So it became really not a fun thing.

It sounds like Madison’s half of the fractured family is going to be stuck there at least overnight, because Alycia specifically mentions how worse it was to shoot during that time….and then having to sleep in the same area.

In terms of scary, just shooting at a hotel at night time is a bit weird. And that hotel is new but still gives you a little shiver up your spine if you think about it too long. . . . We were living and working in the same hotel. That was actually the scariest part. It was like, ‘Oh my God, I’m living in Groundhog Day.’ Living upstairs and shooting downstairs. It was so weird.

Fear The Walking Dead airs its next episode this Sunday at 9 om AMC.

The Best Part Of Fear The Walking Dead: Shifting Scenery

Mercedes Mason Addresses Fan Shipping
Be the first to comment!
Leave a reply »