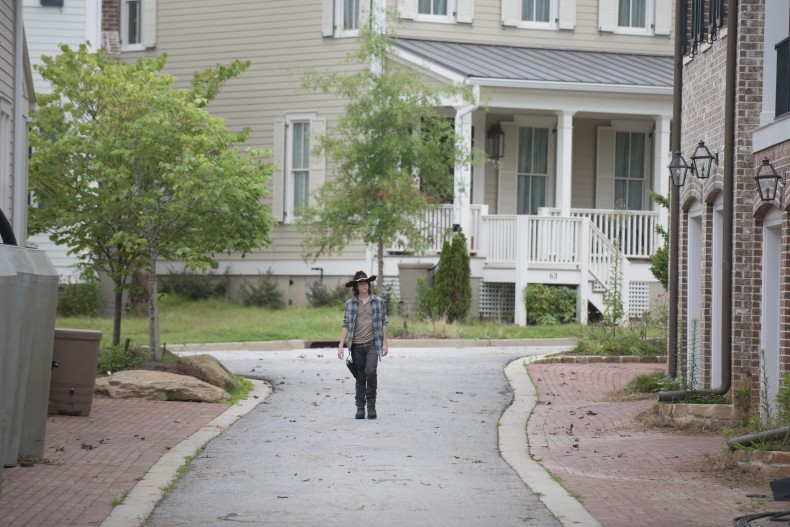 So that “shocking event” AMC has been teasing all week from the Walking Dead season finale? It was the lethal development everyone suspected it would be….but since the person isn’t dead YET, are we right to be skeptical?

There is precedent for TWD pulling a fakeout like this — it was strongly implied that Glenn was dead in Season 6, until he wasn’t — so when the show returns this February (and we’ve passed the text that will display on the main page, so SPOILERS, here comes the name), is Carl going to suddenly reveal some angry child bit him in the abdomen, and not a Walker?

THR got the story straight from the one-eyed horse’s mouth. According to Chandler Riggs, who’s been playing Carl all the way back to the pilot, before puberty…..he really is leaving the show. But it’s not for the reason you think.

It is true that Riggs has been attending college during this season and hasn’t had as much time to appear on the set. But the decision to remove his character from the story was made by other people. “I found out when I was doing rehearsals for episode six back in June. It was quite the shocker for me, Andy and everyone because I don’t think anyone saw it coming…Scott wanted to meet in person because it was such a big deal. We had just finished rehearsing for a scene in episode six and he wanted to meet with me and my mom and dad and talk about what’s going to happen.”

Chandler isn’t broken up. “It’s definitely not a bad thing because it has been awesome being on the show but now I get to go and do a lot of other stuff that I haven’t gotten to do before.” Riggs is set to star in one remaining episode of the season: 809, the midseason premiere. There may be “flashback” sequences in a handful of episodes after that to fill out his contract. “You’ll see bits and pieces and memories of Carl throughout the second half,” he says. “But his final moments are coming pretty soon.”