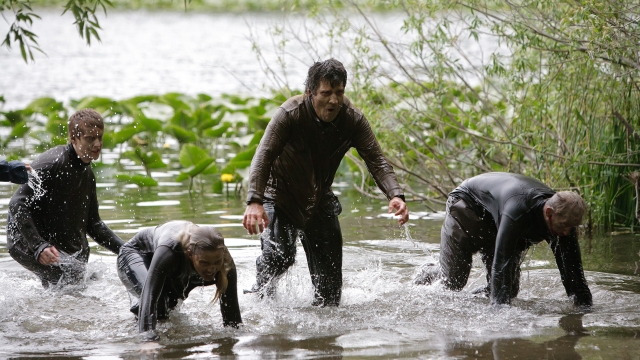 Things move so quickly on Syfy’s Z Nation that you might be forgiven for thinking it’s intended as a 13-episode, one and done season. After all, it killed off what appeared to be a main character in the very first episode and the series has a concrete goal of taking a survivor who might hold the cure for the zombie virus from New York to California. You can read all about it in our recap.

But executive producer/showrunner Karl Schaefer told Dread Central that the show plans to be around for a while.

“We have like a five-year story arc. That’s just how cocky we are about this show,” Schaefer said.

“The network asked me to come up with that before we started, and obviously that may adjust because even once they make it to California, that’s not going to be the end of the line. Nothing goes according to plan on this show for our characters, and the Murphy character’s evolving. Their mission’s going to evolve. The nature of the apocalypse is going to change, and I think the show’s going to wind up going to places that will really surprise the audience,” Schaefer added.

Schaefer also said he knows that his lower budget show will inevitably be compared to The Walking Dead, but said his show strives for a different tone with more of a focus on black humor, social commentary and characters who aren’t so scared of the zombies. And yeah, they call them zombies.

“First off, there is obviously a great zombie show in “The Walking Dead” already on, so our mission is sort of to go where they don’t, and I think the biggest difference between us and them is our series has a sense of hope and also a sense of humor. We’re kind of trying to put the fun back into zombies. Our heroes have a mission that they’re on, so we’re traveling every week. We’re going across the country. They’re not just sort of fighting for survival and hunkering down into one place. They really have somewhere to go and something to do,” Schaefer said. 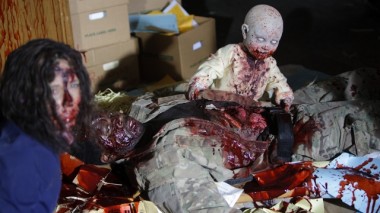 Part of putting the fun back into zombies means taking more risks and doing different things with the concept. The first episode of Z Nation famously, or infamously, featured a zombie baby. Schaefer teases both fast and slow zombies, animal zombies like zombie sled dogs and a zombie bear, and even a human-zombie hybrid. There’s also a Russian Cosmonaut, a cannibal cult, and an all-female survivor’s group coming up this season.

Finally, even though its a low-budget series produced for Syfy by The Asylum, the makers of intentionally bad cheapies like Sharknado 2, Schaefer said Z Nation is not intended to be like those movies.

“When I first came to this project with The Asylum, one of the things we all agreed on right upfront was this would not be a campy mockbuster like Sharknado or some of the other projects that they do, that we wanted to make a real show,” Schaefer said.