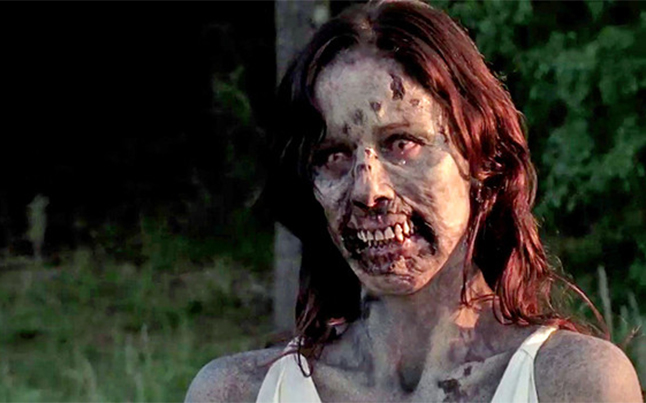 The season 3 DVD has a deleted scene where Lori was actually going to show up in the episode as zombie Lori! That’s right, as a zombie! We can only imagine that the reason for it not being in the episode is that the writers may have thought Rick endured enough, and this simply wasn’t needed.

In the deleted scene, Rick approaches Lori in the woods alongside the prison where she is wearing that white dress. As he approaches her they begin to embrace and they actually share a kiss, however this is where it gets a little strange.

As Rick begins to back away, she suddenly turns into a zombie! Now instead of zombie Lori attacking him, she instead sheds a tear while looking surprised and rather sad.

I wish they would have left the scene in personally as it just shows more of the madness he was experiencing. However, on the other side the scene is a little strange as it shows an emotional zombie, which is far from what the show should be. While it is just a big hallucination that Rick is having, I still think it’s a tad bit strange.

Either way, it is a cool scene to check out. You can watch the deleted scene with zombie Lori on Entertainment Weekly. Also there is one making its rounds as well, but the quality is not that good.

A big fan of The Walking Dead television series. In my spare time I enjoy blogging and simply hanging out. Oh and lets not forget, Go NY Giants!
You might also like
deleted sceneDVDTV Cast