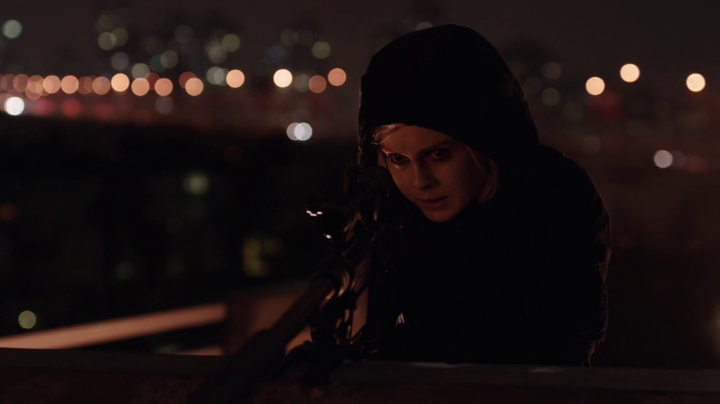 Boy, did I call the ending to this one or what? ….More on that later. 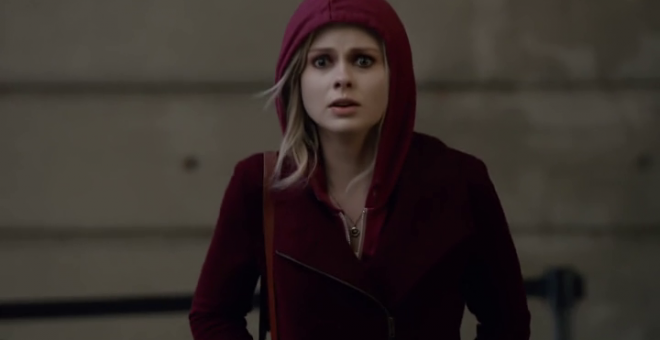 Liv now knows the truth about Blaine, the brain-shuffling racket, and that this was how Lowell was getting fed. She was so furious at this revelation that she nearly broke up with Lowell right then and there. Thing is, though, when your survival and very sanity depends on eating a vital body part of another human being, your moral options aren’t very numerous. Liv eventually comes to realize getting a regular diet from a morgue is the exception, not the rule, and when Lowell admits he had to dig up a grave just to feed again without Blaine, Liv hugs him and they make up.

This doesn’t quell her rage regarding Blaine, however, and she says coldly, point-blank while staring fiercely across the room, “I’m gonna kill him.” She really meant it. Being the ultimate supportive boyfriend, Lowell was like “What my baby wants, my baby gets….gunshot or poison?” 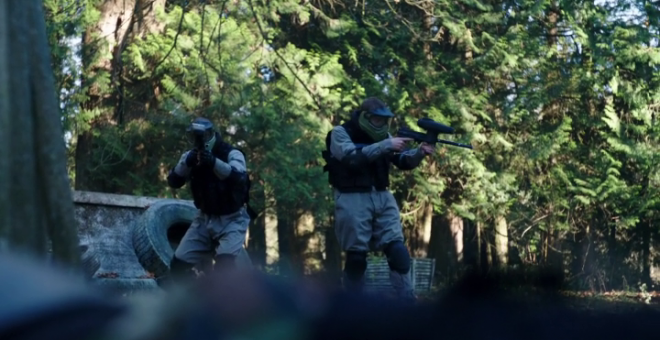 We now cut to a paintball tournament….where SOMEONE is shooting MORE than just PAINT! When the dead body of Everett, an ex-soldier, is discovered at the range, Clive is called in to investigate and Liv is called to eat his grey matter. They learn from a friend at the crime scene that the victim was dumped by his ex-wife Penny while he was on duty, and her new husband was attempting to gain custody of their child. To top everything else, she found a new job in another state and they were moving — all three of them. 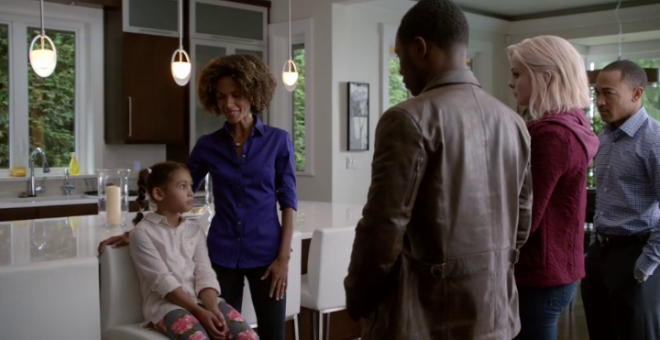 They question the ex, her new husband, and their kid, who sees Liv and immediately blurts out “You’re freaky looking. Why are you so white?” Liv has a vision of Everett in their house punching Husband’s lights out, and Penny waving a knife and chasing after him. The question is, if this actually happened, why didn’t the husband use it to his advantage in the court battle? Hmm.

Everett’s brain has given Liv a thirst for combat, which she burns off by engaging in some paintball herself. While exploring the area where the event went down, she finds a bullet shell casing…..yards closer to where Everett was shot than the police originally determined. Fifteen feet away — close enough to be seen, meaning the murderer might’ve been a friend. Snooping in Everett’s former apartment, Liv finds a sniper rifle under the bed — and immediately gets a vision of the friend from the crime scene taking an unauthorized peek at it. Was it him? 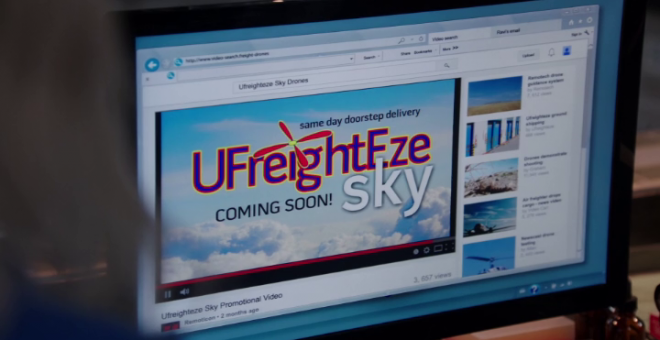 Nope. But if not, then who else was there and could have done it? It turns out Penny’s new husband is loaded with cash, and that’s because he works for a successful company that’s been making drones for an online Amazon knockoff. Since he had access to one of those drones, and Everett’s violent confrontation made him worried about his family’s safety, he used one to remotely assassinate Everett from the comfort of his own home. ….This isn’t actually possible, is it? 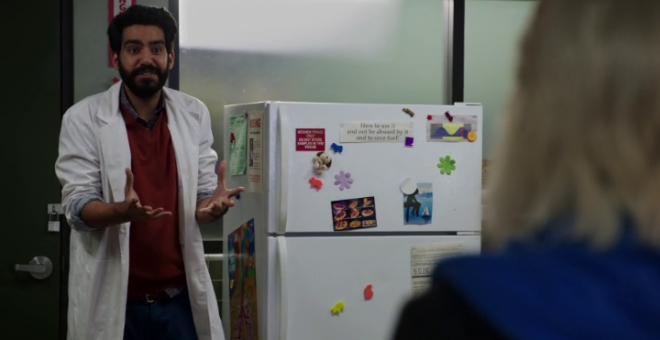 The biggest cliffhanger this show has delivered to date was Ravi getting bitten by his own zombie rat. You can imagine my disappointment when the whole thing turned out to be a red herring. Turns out the infection can’t travel between species! Well, isn’t that convenient. Bleh. 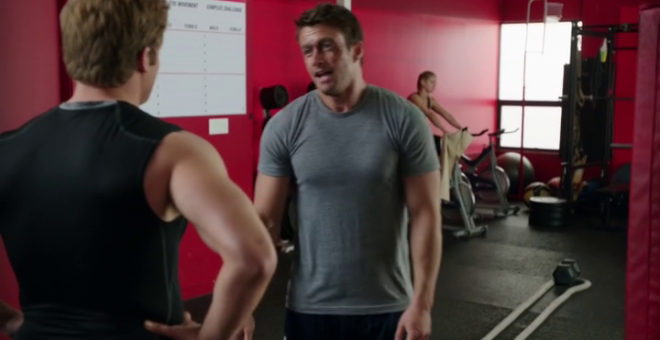 Normally if the audience knows something about the plot that a character doesn’t, it doesn’t take that character long to figure out what’s going on. Not so with Major, who still has no idea why Candyman would be carrying around brains in Tupperware, or where he got them. Watching him walk into a fitness gym and wink and nudge the man in charge while asking about “the human brains diet” was pretty hilarious. As his typically terrible luck would have it, Candyman regularly goes to that gym, and finds out later Major had been doing this.

That was the last straw….it was time for a lesson. Candyman tracks down where Major lives and bursts straight into his house to beat him up. Fearing for his life, Major races up the stairs and nervously feeds his gun full of bullets. As Candyman enters the room, Major whirls around and fires twice into his chest, once on the right and once again on the left just in case he happens to be a clone with mirror organs like Helena on “Orphan Black.” 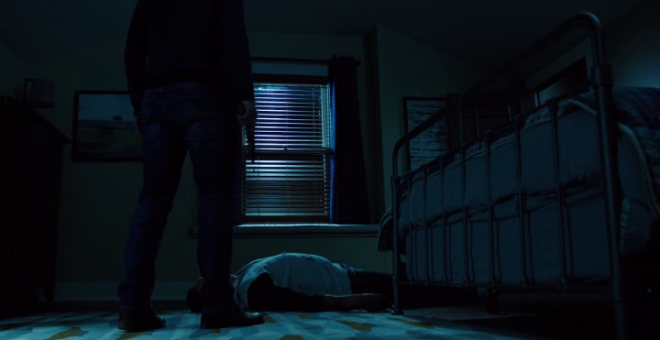 He appears to be dead, so Major slowly moves in for a closer look, having learned nothing from horror movies. Sure enough, JUMP SCARE as Candyman’s hand grabs his leg. Major fires one more time, and the guy lies still once more. But you can’t kill the undead (unless you aim for the head like Liv is about to). By the time Major leaves and comes back with Clive, Candyman has gotten up and left through the window. Because of his absence, Clive doesn’t believe Major and thinks he’s been ingesting something mind-altering. And now Major’s completely stumped. Only the discovery that zombies exist will solve his inquiry this time. Will he find that answer? 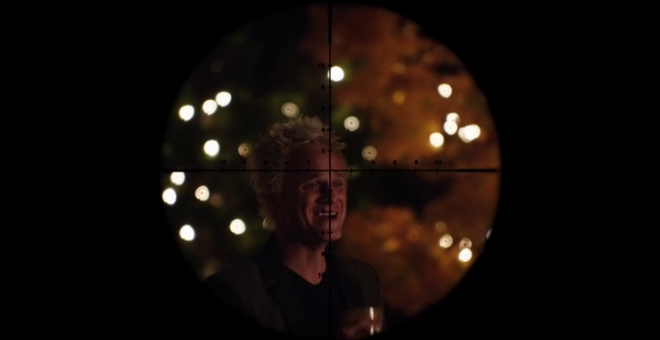 Everything’s set up. Lowell is schmoozing with Blaine on an open deck, across from a skyscraper where Liv sits atop, screwing together a high-powered sniper rifle. She’s got the determination, the setup, and the (literal) brains to hit this shot perfectly. But when it comes down to it, can she kill a man? No, she cannot — as she starts to squeeze the trigger, she dissoves into tears instead, and texts Lowell saying she’s chickening out. I said last week that Blaine was the very last person I would ever expect to bite it, as he’s become irreplaceable to the show at this point.

But Lowell? He felt so temporary that I figured if anyone was about to die, it would be him. And he fulfilled his temporary-ness right on schedule. He looked visibly let down that Liv wasn’t taking the shot, but then when Blaine’s BBQ gave him a vision of Blaine torturing someone, he absolutely snapped. He whirled around with a utensil and attempted to stab him, but Blaine was too quick and dispatched Lowell instead. While this was, indeed, predictable, it reveals a flaw in Blaine’s grand scheme I hadn’t realized before. If Meat Cute brain meats give their customers visions from the deceased, wouldn’t EVERY customer eventually figure out Blaine is scum? Surely Lowell isn’t the first one to attempt to take the guy’s life.

As for what happens after this, now would be the perfect time for Liv to finally communicate with Major again and help that poor guy out a bit. It’s not like anyone’s going to become jealous anymore.