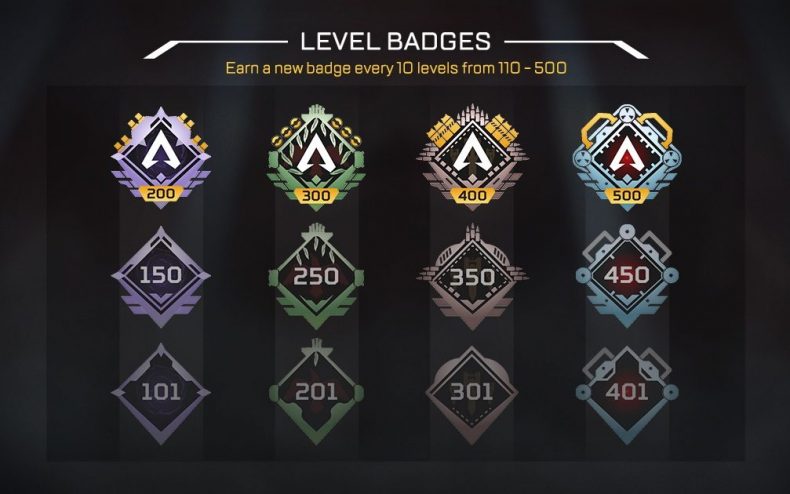 A long-overdue upgrade to Apex Legends will be hitting December 3. The next update will finally raise the level cap, and the new limit will by substantially higher than the original one. Currently, players are capped at Level 100. The update will set the new cap at 500.

The increase brings with it a new stack of weapon charms and level badges to earn as you climb the new ladder. Players will get an early boost as Respawn will be temporarily reducing the amount of XP you need to level up.

Those who are still far below will also get more — the first few levels (2 through 20) will now always grant an Apex Pack when you reach them. After this, a new Pack will be granted every two levels from 21 through 300. And if you already reached those levels long ago, you’ll retroactively receive the Apex Packs you would have gotten were the new system in place. The number of Legend Tokens (600 per level) remains the same.

The patch notes for this upcoming update are posted below.

The Player Level cap has been increased from 100 to 500. Players can now earn a total of 199 Apex Packs related to Player Level rewards at the following cadence:

The net impact of this change is that players will now earn 59 Apex Packs from level 1 – 100 (up from 45 Apex Packs prior to this change). All players will be retroactively awarded any Apex Packs they should have received under this new system. For example, players who are currently level 100 will receive 14 Apex Packs when this system goes live.

Under the old system, there was a large increase in XP required at level 26. Under the new system, we’ve reduced the rate at which XP required to level up increases from levels 20 to 58. The net impact of this change is that the XP curve should be softer for new players, meaning they will get more rewards, faster through level 58. Additionally, the total XP required to hit level 100 will be reduced by approximately 5%. Because XP requirements are being reduced, players between levels 20 and 99 may find they are a level higher after this change goes live, if they were close to leveling up. These XP changes will have no effect on players already at level 100.

The maximum XP required per level will remain at 18,000 starting at level 58 (26 in the old system) and will remain constant through level 500.

We’re introducing 36 new Gun Charms to Apex Packs. They will be available in Epic and Legendary tiers. Additionally, Gun Charms will now rotate through the Shop.