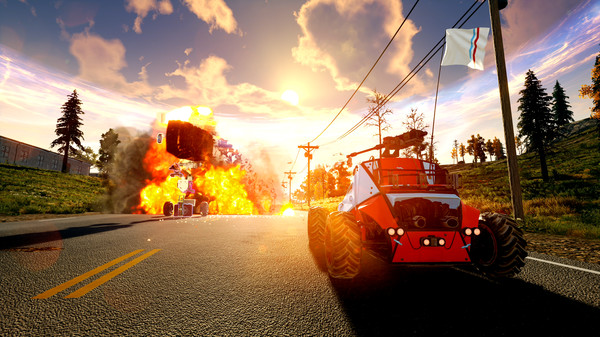 There are a lot of battle royale games out there now, fighting for attention. There’s a lot at stake, because in your typical large-sized gaggle of Fortnite wannabes, only one will actually see mainstream success. Competing in the battle royale industry is…..like playing Battle Royale, ironically.

To get noticed in that crowd, you have to try something different. MNC Studios may be onto something by throwing car combat into the formula. You all land on the arena as cars, collect weapon caches as speedily as you can floor it to them, and fire on your rivals — before they total you first!

The name of the game, by the way, is “notmycar,” like how Droopy Dog would express viewing a botched valet parking job. We’re not sure why it’s written this way beyond marketing reasons.

Drop: Get a double-shot of adrenaline as you freaking glide your car into each match. Pick the best landing zone on a massive island battleground that gets smaller and smaller, driving all your enemies right into your sights.

Drive: Customize your battle wagon to the nines so your worthless enemies know fear as they spot you on the horizon and remember exactly who blasted them into oblivion. Flags, paint jobs and more: it’s all up to you.

Destroy: It’s pedal-to-the-metal as you race to snatch the best weapons from caches all over the island. Second place is the first loser, so show no mercy and fight your way to the top of the junk heap to be the last car standing!

notmycar will enter Steam Early Access April 5 at the competitive price of free. Join the crowd in the game’s first week of existence, and you’ll be given a free paint job for the Beast vehicle.

This is the Weirdest Battle Royale Game
Be the first to comment!
Leave a reply »