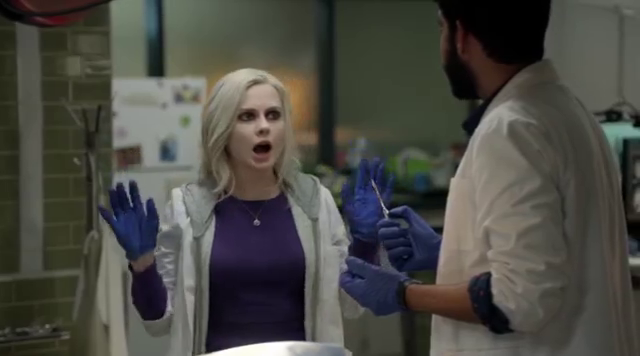 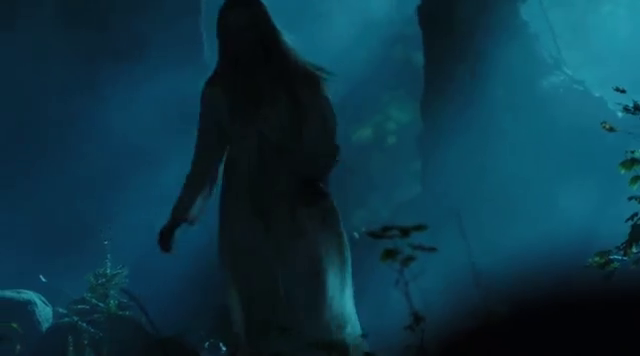 This week’s case opened with a strange pregnant woman randomly stumbling into the campfire circle of a group of teenagers, flopping to the ground and dying. And the circumstances got stranger from there.

Fortunately, the baby lived, but in order to figure out how such a scenario came to pass, there was only one person to turn to: a zombie who gains the memories of the brains she eats and solves crimes with the visions she gets while pretending to be a psychic. The effects of Preggo’s brain were almost immediate on Liv, giving her maternal instincts and a hilarious case of nag-the-young-people which she unleashed on nearly all her friends. It also made her fiercely protective of the baby, and determined to make sure he wound up under the correct care. 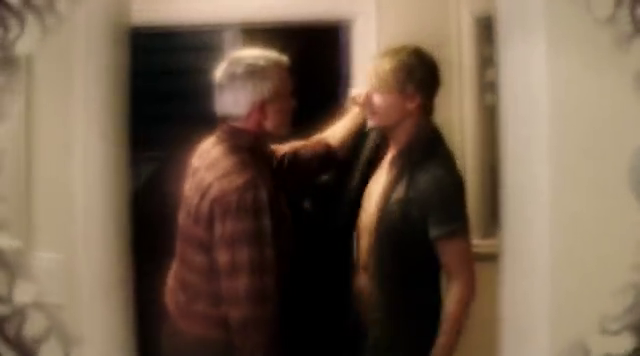 She was certain the murderer was Dillon, the lady’s ex, even though he technically WAS the father. Ten seconds with the little creep made Liv suspect he had something to do with the incident. Her parents figured so as well, telling Clive to put him under investigation.

After a short conversation, they think it might…..not have been Dillon. Even though he had a record with the cops already, he hadn’t seen the woman in quite a while: the very last time was when she saw her get into a pickup truck with a mysterious stranger. Also, the parents who gave Clive that hot tip are shown landing a punch on Dillon’s face in Liv’s first vision, so they can’t be trusted either. In fact, maybe….it was them? 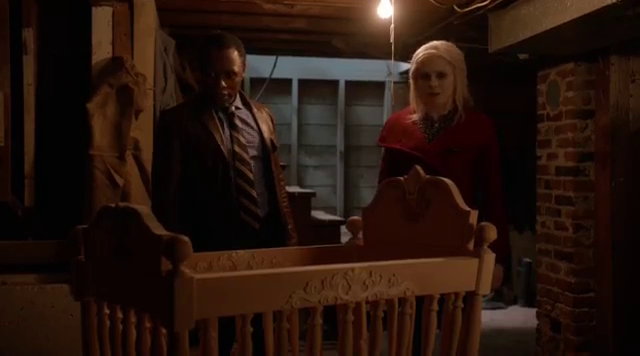 An examination determines the woman had been held captive somewhere for quite some time and her death was due to extreme shock. Liv concocts the theory that her own parents must have locked her in the basement. She and Clive decide to check that basement out, and find a wooden crib that must have taken some time to carve….like eight months’ worth?

A common thread here is “dogs.” Liv heard dogs barking in the visions from the woman’s perspective. Dillon claims he heard dogs barking when the woman was taken away. And now Liv and Clive are hearing barking dogs as the victim’s parents return from work, and slam the cellar doors shut believing the pair to be intruders. 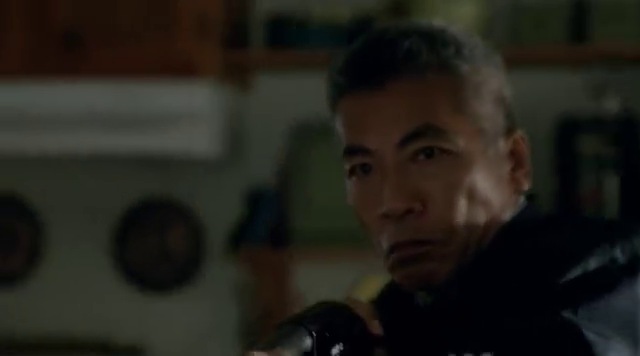 All signs seem to point to the parents, but again, it ultimately turns out to not be so. Fortunately, Liv has some clearer visions that implicate a man who works for Animal Control (explaining the barking). It turns out he and his wife have been living in the woods, holding several girls prisoner in a padlocked treehouse, and that the victim had died while trying to escape back home. At this point, the police chief got involved in the raid, and based on his previous “by the book” performance, I expected him to be more of a hindrance than a help. Then, when no one was looking, he turned full-on zombie and ripped apart the husband, then turned back to normal and shot the wife point-blank because he could. Sure had YOU pegged wrong!

Meanwhile, back in Major Land, his private investigation is sinking him deeper into danger, though he appears unaware of just how much. It’s now been established the large zombie thug who works for Blaine is known as “The Candyman,” though no explanation is given for that moniker. 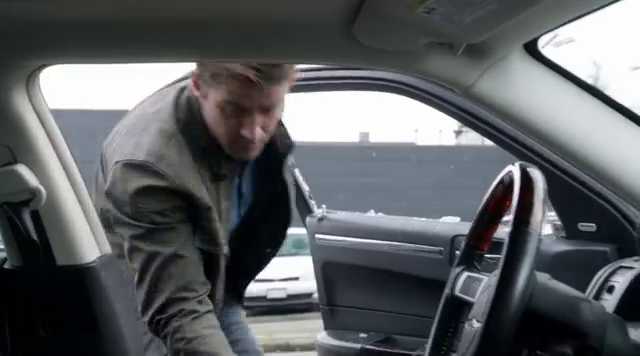 I stared in disbelief as he actually broke the glass window to snoop around in Candyman’s car. Picking the lock would have been a much safer — and quieter — method of gathering evidence. He does find some valuable info, but the cops then appear in their squad car, and Major immediately steps out of the broken door carrying a tire iron. What did you think was going to happen, pal?

What Major found was a business card revealing Candyman’s real name: Julien Dupont. He also found a container with Dupont’s lunch in it, which made him freak out. As the police close in on him, Candyman picks that moment to emerge from a tanning salon. Major shouts and points him out. 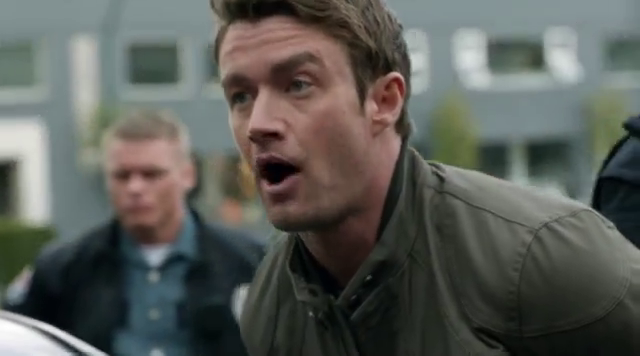 “Officers, arrest that man! That is Julien Dupont, otherwise known as The Candyman! He’s a drug dealer and he pushes Utopia to kids around the skate park; I can confirm his involvement with at least two boys! AND HE’S GOT A HUMAN BRAIN IN A TUPPERWARE CONTAINER!”

The cops order Julien to freeze while they check out Major’s claim. And they do find the Tupperware. How will he sneak out of this? 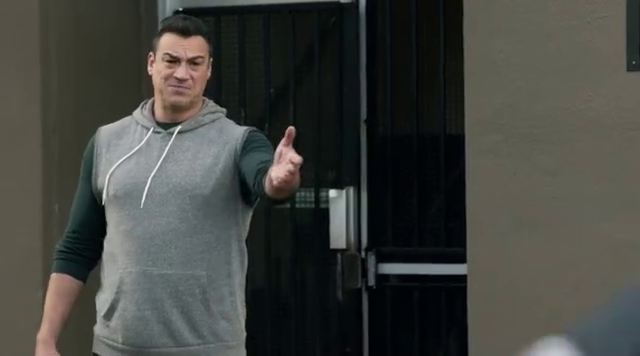 “Look, it’s actually a cat brain. I work for a merchant of exotic foods known as Meat Cute. Let me give you my card.”

A cat brain? It’s huge! That would have to be the biggest cat ever recorded! There’s no way the fuzz are going to swallow this bulls– 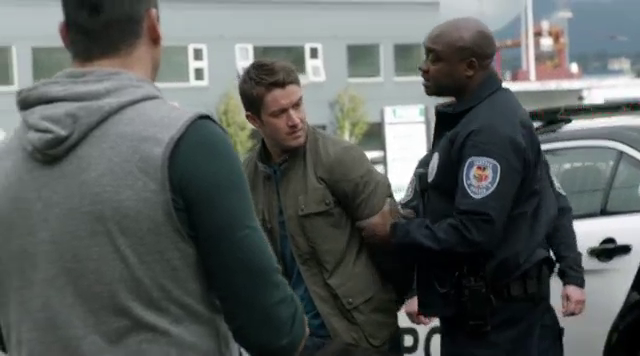 “Sorry to bother you, sir. Major, hands behind your head.”

Now not only is Major behind bars for attempted car theft, Candyman knows he’s onto him, and he’ll be telling Blaine. It’s too bad they’ve broken up, because he now needs Liv to live. 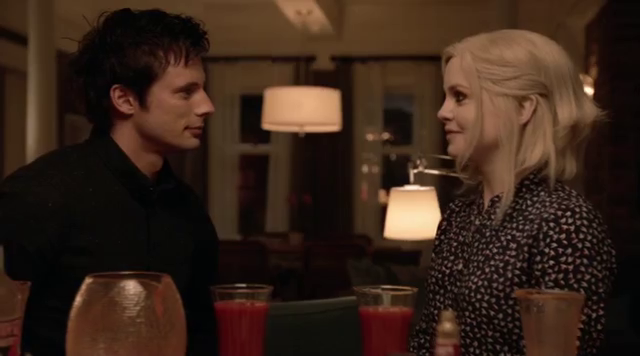 But Liv is currently ignorantly, blissfully occupied with Lowell. She was worried for a moment when Lowell seemed to be getting more distant and his kisses began to lack any sense of passion. Then she found out he wasn’t feeling up to it because….he’d eaten a gay man’s brain! Ha ha! They had a crazy “girls’ night out” instead, and saved their more intimate plans for after his next feeding. 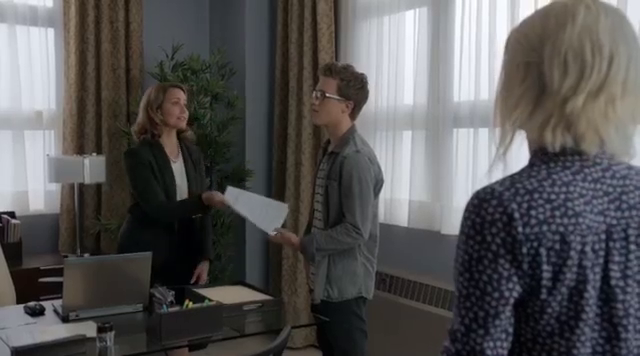 OTHER MINOR THINGS THAT WILL BE IMPORTANT LATER: When Liv’s mother visited Meat Cute at the end of last episode, it was apparently to pick up a job application for Liv’s brother. She hands him a few others as well, but the odds are decent he’s going to wind up at the first business visible in the stack. And since we’ve already seen the life and death of Blaine’s previous two employers, we know this is not good. Between this and Major, Blaine is about to annoy the crap out of Liv in a big way. It’s adding up to a season finale super-fight.

But we’ve got a whopping six more episodes to get through before then. Which is fine with me.