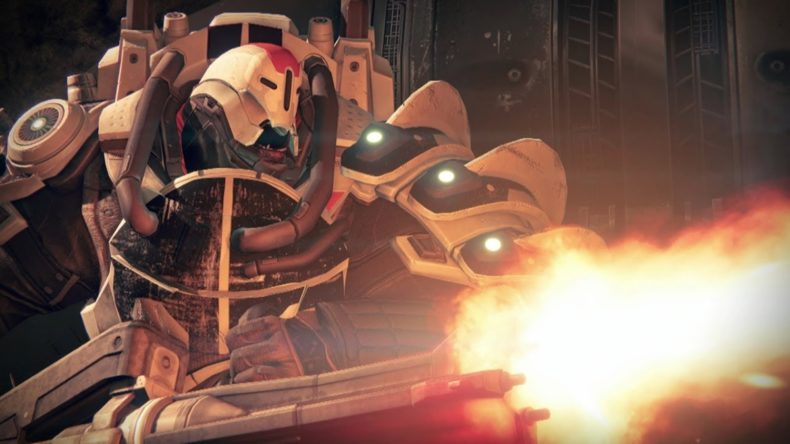 Three collector’s editions were also announced, including: the fully packed Destiny Ghost Edition ($149.99) pictured above, with Ghost replica that plays Peter Dinklage sound clips; the  slightly less impressive, but still extensive Destiny Limited Edition ($99.99); and the Destiny Digital Guardian Edition ($89.99), which comes with none of the physical goodies but includes the special digital content. Plus we have pricing for a standalone Destiny expansion pass, which will give players access to two planned $19.99 expansions for $34.99.
The expansion pass comes in all of the collector’s editions.
The full press release follows:
Santa Monica, CA – July 7, 2014 – Activision Publishing, Inc., a wholly owned subsidiary of Activision Blizzard, Inc. (NASDAQ: ATVI), and Bungie today confirmed the calendar for the highly anticipated Destiny Beta, which will include a diverse sampling of major activities featured in the full game. Fans who pre-order Destiny at a participating retailer are guaranteed access into the Beta, which will commence as follows:
The Beta begins first for PlayStation®4 computer entertainment system (PlayStation Plus required for some features) and PlayStation®3 computer entertainment system at 10:00am PDT on July 17
The Beta begins for Xbox One, the all-in-one games and entertainment system and Xbox 360 games and entertainment system from Microsoft (Xbox Live Gold required, subject to change) at 10:00am PDT on July 23

The Beta will be offline for scheduled maintenance on July 21 – July 22 and open back up to pre-order participants across all platforms until 11:59pm PDT on July 27
Fans can watch the brand new Destiny Beta trailer here: https://www.youtube.com/watch?v=TljtC5qnb-s
“As we prepare to launch our first Beta on multiple console platforms around the world, we are excited and eager to open the flood gates,” said Harold Ryan, Bungie’s president.  “We already love to play Destiny, and with your help we can be ready for our launch in September.”
Activision and Bungie also revealed today three epic collector’s edition versions of the game. The Destiny Ghost Edition and the Destiny Limited Edition both include the following:
Limited edition SteelBook™ Case and Game Disc
Guardian Folio:
o   Arms & Armament Field Guide
o   Postcards from the Golden Age
o   Antique Star Chart
Collector’s Edition Digital Content Pack:
o   Unique Ghost Casing
o   Exclusive Player Emblem
o   Exclusive Player Ship Variant
Destiny Expansion Pass – expands the Destiny adventure post-launch with the following two expansions, which will include brand new story missions, cooperative activities and competitive multiplayer arenas, and a wealth of all new weapons, armor and gear to earn:
o   Expansion I: The Dark Below – Set deep beneath the surface of the Moon, fans will discover an ancient tomb that has been unsealed, and a dark god who has risen an evil army in the depths of the Hellmouth, the home of theHive enemy race
o   Expansion II: House of Wolves – details will be revealed later
o   PlayStation platforms will also include additional exclusive content for Expansion I and II and will remain exclusive until at least Fall of 2015
The Destiny Ghost Edition will also include the following:
Ghost replica, featuring motion-activated lights and voice recordings from award-winning actor Peter Dinklage, voice of the Ghost character, the player’s personal companion in the game
Letter of Introduction
Golden Age Relics, which include a Photo, Patch, Sticker and two Chrome slides of the Traveler
For digital pre-order fans, the Destiny Digital Guardian Edition includes a digital download copy of the game, Destiny Expansion Pass and the Collector’s Edition Digital Content Pack.
The Destiny Ghost Edition ($149.99), the Destiny Limited Edition ($99.99), the Destiny Digital Guardian Edition ($89.99) and the Destiny Expansion Pass ($34.99 for the pass, Expansion I and Expansion II will be priced individually at $19.99 when they launch) are available for pre-order now. All pre-orders on any sku will include access to the Vanguard Armory that includes early access to weapons, gear and exclusive player emblem. Fans can visit http://www.destinythegame.com/wheretobuyto see a list of participating global retailers.
For more information about the Beta and the Destiny collector’s editions, visit www.DestinyTheGame.com.  For exclusive updates, follow the official Destiny social channels at www.facebook.com/DestinyTheGame and @DestinyTheGame on Twitter, and interact directly with the developers at www.Bungie.net.

About Destiny
Players are cast as Guardians of the last city on Earth, who will explore the ancient ruins of our solar system from the red dunes of Mars to the lush jungles of Venus. Able to wield incredible power, gamers must battle humanity’s enemies and reclaim all that was lost during the collapse of mankind’s Golden Age. In a story-driven universe, Destiny unfolds through grand tales and epic adventures by immersing players in a bold new universe filled with cooperative, competitive, public, and social activities, all seamlessly connected. Destiny is rated T for Teen by the ESRB (Animated Blood and Violence).