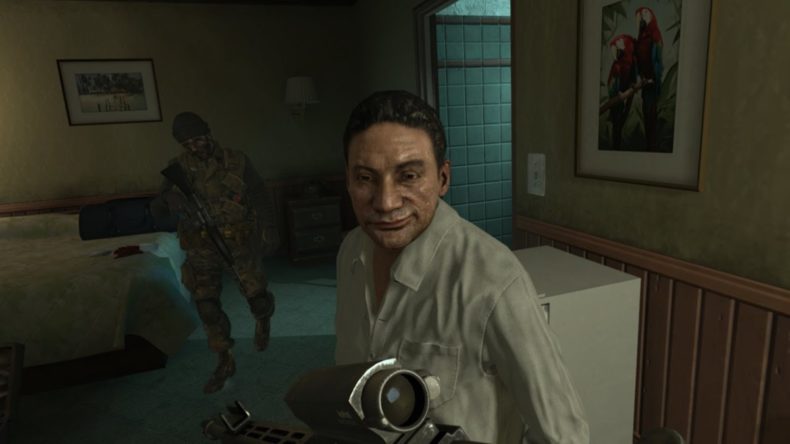 You’d think it would be tough to besmirch the reputation of Manuel Noriega any further.
The former military dictator of Panama has been in prison since 1990, convicted of a host of crimes against the U.S., Panama, and France including money laundering, drug trafficking, and murder. Before that, he fell from power and was captured during a U.S. invasion that ended with a humiliating standoff where Noriega hid in the Vatican Embassy and the U.S. blasted rock music to try to force him out. Before that, he was a  CIA asset whom the intelligence agency allowed to establish a “narcokleptocracy in Panama, accumulating near absolute power through corruption and drug trafficking in exchange for some cold war considerations like listening posts in Panama.
But apparently being in a video game is the thing that pushed his reputation over the edge. On Tuesday Noriega sued Activision over misappropriating his image for Call of Duty: Black Ops II. You remember Noriega’s portrayal in that, a sneaky double-crossing CIA tool in that game’s recreation of the invasion of Panama. It’s certainly not a flattering portrayal.
According to Courthouse News, in a lawsuit filed in Los Angeles Superior Court, Noriega claims:
“In an effort to increase the popularity and revenue generated by BLACK OPS II, defendants used, without authorization or consent, the image and likeness of plaintiff in BLACK OPS II.

“Defendants’ use of plaintiff’s image and likeness caused damage to plaintiff. Plaintiff was portrayed as an antagonist and portrayed as the culprit of numerous fictional heinous crimes, creating the false impression that defendants are authorized to use plaintiff’s image and likeness. This caused plaintiffs to receive profits they would not have otherwise received.”
He claims the game portrayed him “as a kidnapper, murderer and enemy of the state. An objective of one portion of ‘Black Ops II’ is solely to capture plaintiff.”
Noriega is seeking punitive unjust enrichment, unfair business practices, and violation of common-law publicity rights and “lost profits.”
It will be interesting to see if this one has any legs, or is just a wacky nuisance suit that will soon be forgotten.

Call Of Duty Elite Killed Off