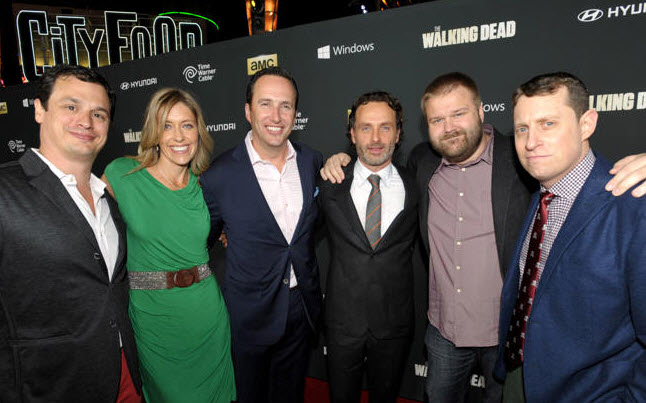 The Walking Dead is one of television’s most popular shows that has ever aired, and the mere thought of a spinoff really got fans excited. The spinoff announcement was made this past September, and since then, we have been dying to hear more about it.

Well just recently, AMC sat down with Vulture where they covered topics ranging from their network to The Walking Dead. During that interview, AMC shed some light on the status of the spinoff series.

“That show is not as far along [as compared to Better Call Saul]. Robert has some things on his plate. He continues to write every issue of the comic and hasn’t finished season four of The Walking Dead, which he is very intimately involved with and will continue to be. That’s really in the incubation stages. The one thing that I’ll share is just an anecdote that Robert shared with us. He has such a specific vision that he laid out really clearly in the first issue of the comic book. And I encourage anybody who’s interested in the show to go read the note that he wrote in the first issue of the comic. His motivation for telling that story was so clear and so powerful, and it served as such a great north star for the show. We kicked around a few ideas, but primarily what he’s working on is, what is the idea that gives [him] as clear a mandate to make another version of this show as [he] had for the first one? What is going on [now] is a more philosophical discussion over why there should be another version of the show. Once we answer that, we’ll zero in on the specific creative.”

They then went on to say the following about the spinoff as they seem to take offense to the word “spinoff” to describe this new series.

“They’re not just [creating] a spinoff. I hate the connotation, because they are really trying to create something original out of a great character. It’s so much more than a spinoff. When you hear them talk about it, they really are going back to the drawing board taking the time to invent something.”

It looks like we have some time to wait before we get that spinoff we are dying to watch. However, we do only have a few more weeks until season 4 of The Walking Dead begins again.

A big fan of The Walking Dead television series. In my spare time I enjoy blogging and simply hanging out. Oh and lets not forget, Go NY Giants!
You might also like
AMCspinoffExtras