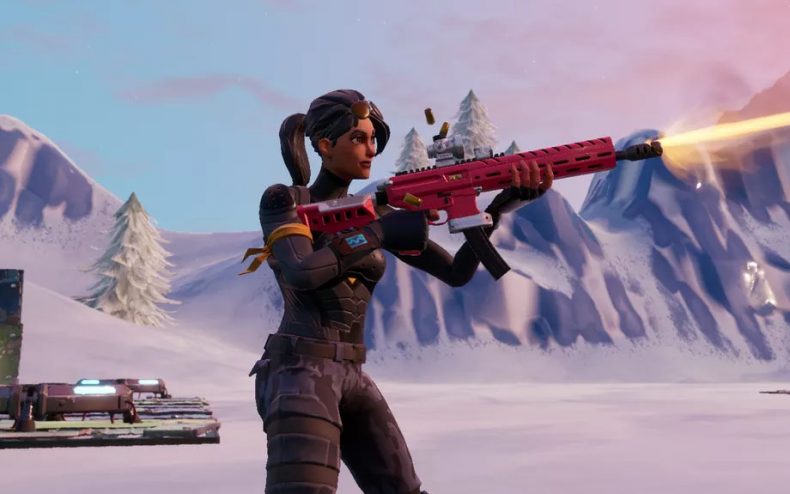 This week Fortnite upgraded to Version 9.10 — the biggest change this update brought with it was Hot Spots. Look on your map every match for locations in gold text…you’ll find Loot Carriers there, and lots of ’em (twelve to sixteen depending on the location’s size). At least one Hot Spot will occur in every match…sometimes two or even three, if you’re fortunate.

Epic has unvaulted the Semi-Automatic Sniper Rifle, since every other rifle of its type has been removed. It will now be harder to find Shadow Bombs or the Combat Shotgun (the latter since it was intended to be a rarer drop than it ended up being).

The full patch notes lie below, with some commentary by Epic.

Comment from Epic: Shadow Bombs have seen a lot of late-game use, and we wanted to encourage risk vs. reward when picking the item up. By leaving maximum stack size the same & reducing availability, the item’s potential remains the same but swapping a spot for it early on is riskier.

Comment from Epic: Since the Thermal Rifle and Scoped Revolver have both recently been vaulted, this week we wanted to bring back an oldie but goodie to round out the medium/long-range item line-up.

Comment from Epic: When compared to other items of similar rarity, the Combat Shotgun was dropping a bit too frequently. This change will put it closer in line with other items.

Sniper Rifles only. Downed players are eliminated instantly. May the best aim win!

Battle Royale gameplay with a limited set of weapons made up entirely of items that are vaulted in the standard modes.

Every match, select named locations will be marked in gold text on the map.

Minimum of one Hot Spot

Loot Carriers drop a weapon of Rare or higher quality along with two stacks of ammo.

Hot Spots will have between 12 and 16 Loot Carriers depending on the size of the location.

Equipping the blueprint to start building has improved in high latency situations.

Comment from Epic: We’ve noticed iOS patches have experienced delays appearing in the App Store recently. Apple has stated that any application can take up to 24 hours to appear in the App Store. If no update is available, be sure to check our social channels for more info.