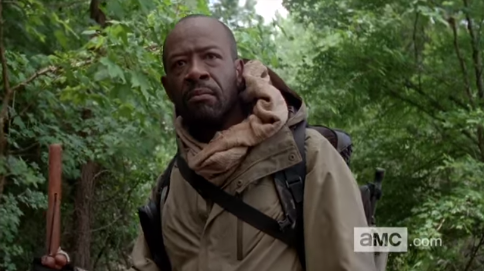 This is all you get for a while: Season five of The Walking Dead wraps up this Sunday with a 90-minute episode. Here’s the solitary clip that AMC has released:

Ever since the party entered Alexandria, they haven’t exactly been welcomed with singing and dancing. Tension has been growing between Team Rick and Team Deanna, and a season-ending confrontation looks imminent. In this clip, Maggie confronts Deanna to plead Rick’s case, but Deanna seems less than convinced of his worth.

Is the gang at the brink of a battle? Will the mysterious “W” mark finally be explained? Will Morgan make another appearance? Will Daryl make his last appearance? Will at least one character die? (Probably.) For possible answers to these questions, plus new questions you’ll have to wait until fall to see resolved, tune your cable dial to AMC this Sunday at 9.

The Walking Dead Fifth Season Finale “Conquer” Recap and Rating Poll
Be the first to comment!
Leave a reply »