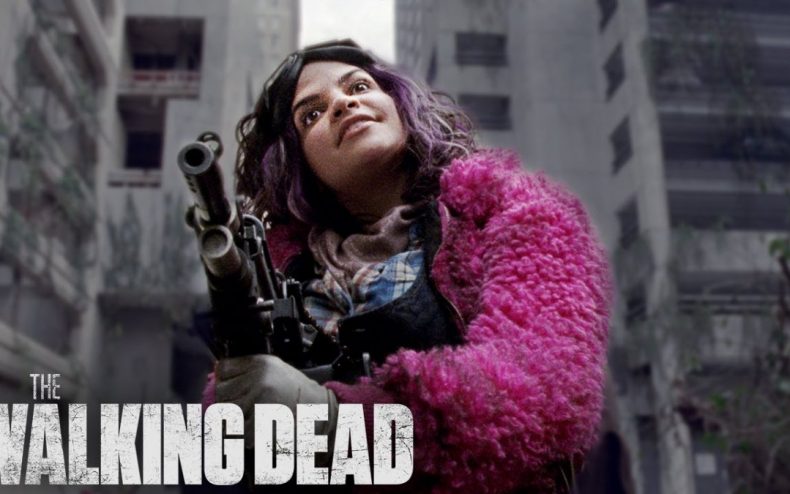 Why is this Sunday’s new episode of The Walking Dead the last one? Didn’t AMC say we had at least one more to go after this? True — originally — but circumstances I shouldn’t need to explain have extended the baking time of that last episode. It still needs work in post that can’t be accomplished right now, so the season finale has been shoved off to another month. We won’t know WHICH month until the world starts getting well again.

We should probably prepare for an irritating cliffhanger — the Whisperers, enraged over the stealth assassination of Alpha, are about to invade Alexandria, and that confrontation probably won’t resolve itself just yet. But we’ve got a lot of clips this time, more so than usual. First, as always, the opening scene:

Who was that purple-haired, perky woman who appeared during the final minutes of last week’s episode? Are you prepared for the answer? You only think you are….

This next clip is from the Whisperer invasion. You can stop watching after a minute because it just lapses into unrelated clips to break the ten-minute mark.

And finally, the website Comic Book Resources got their hands on an exclusive clip, where Negan has a chat with Alpha’s daughter. Negan is the one who killed Alpha, and Lydia now knows it….and though she wasn’t fond of her mother’s actions, she’s not happy about her abrupt departure either.

The last new episode of The Walking Dead until the unscheduled season finale airs Sunday at 9 on AMC.