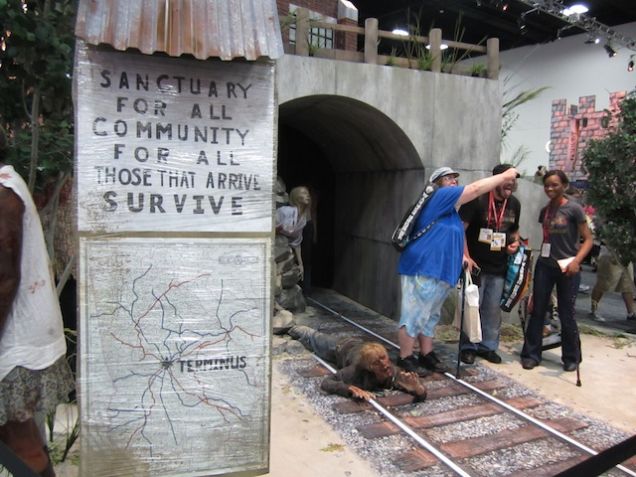 Although tomorrow’s panel, where the season five preview will be unveiled, will be the big Comic-Con event, the con’s preview night Wednesday and first day today have also yielded some cool stuff. 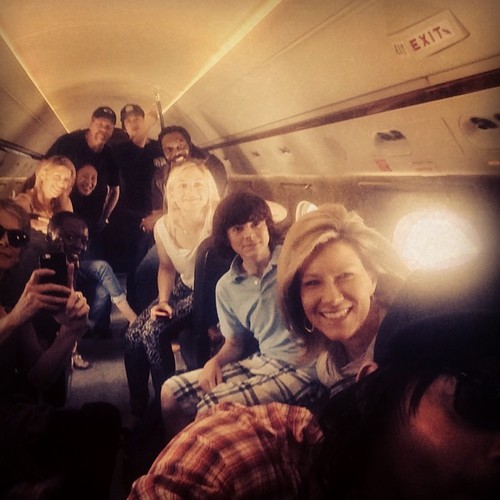 First up,thanks to Norman Reedus’s tendency to take selfies, we have a very interesting pic of the cast in the air on the way to the show. Two notable people in this pic, Emily Kinney and Chandler Riggs, are not listed as official guests at tomorrow’s panel. I suppose they might just be hitching a ride, but it’s possible they’ll be surprise guests or last minute additions to the panel as well. Supporting that theory is the fact that Norman seems to have taken this off his Instagram shortly after posting it, but of course intrepid fans at our forums snagged it first. 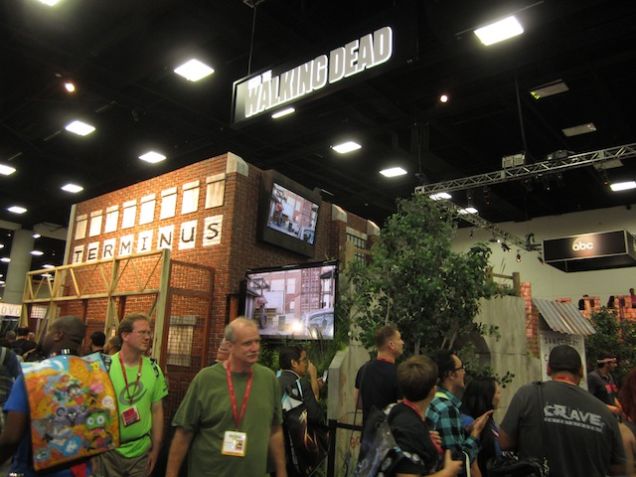 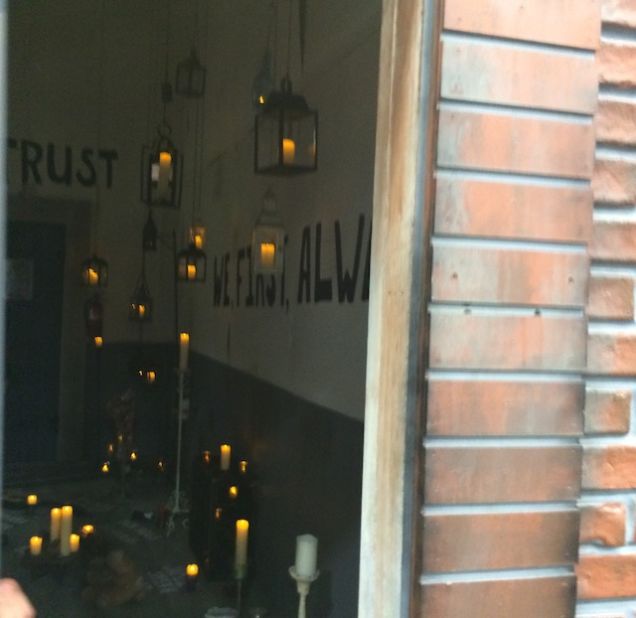 We’ve also got, via IO9, pics of The Walking Dead’s Booth at Comic-Con. Terminus, the spooky train tunnel leading to Terminus, and the weird room at Terminus are all represented in miniature. 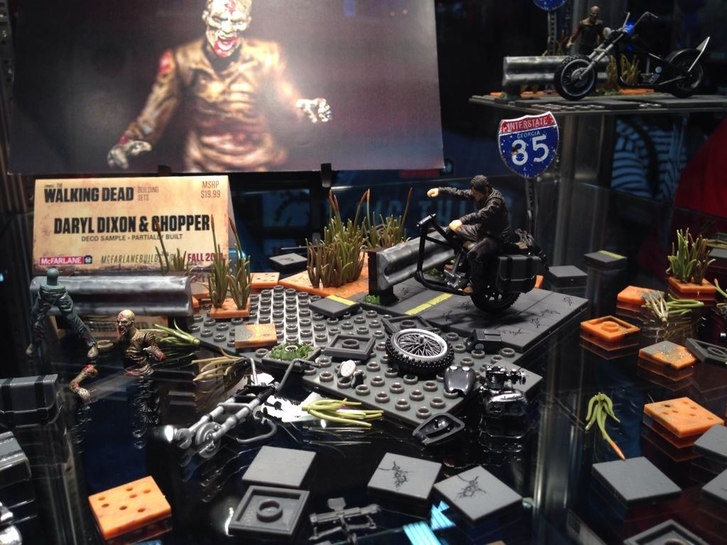 There are so many The Walking Dead toys on the show floor. This picture from Pocket-Lint.com shows the impressive The Walking Dead brick building sets that are coming from McFaralane toys on display.

If you want something way weirder, you can stop by Gentle Giant’s booth on the floor and have your head scanned for a personalized The Walking Dead figure. You can get it scanned directly on a zombie and it is 3D printed at the booth.

AMC is also running a selfie contest with a weird prize. People that post selfies of themselves on the show floor will be in the running to be invited to a Terminus-themed barbecue. Usually that’s the last place you’d want to go because you might end up the main course, but the Comic-Con version sounds a bit safer.

There’s also a cosplay contest, the Courtyard@Super Hero HQ, ongoing at Petco park. Winners will get a chance to meet Norman Reedus, The Walking Dead producer and special effects guru Greg Nicotero, and George R.R. Martin, creator of the Game of Thrones series. Reedus is chosing the winners and Nicotero will be giving makeup tips. 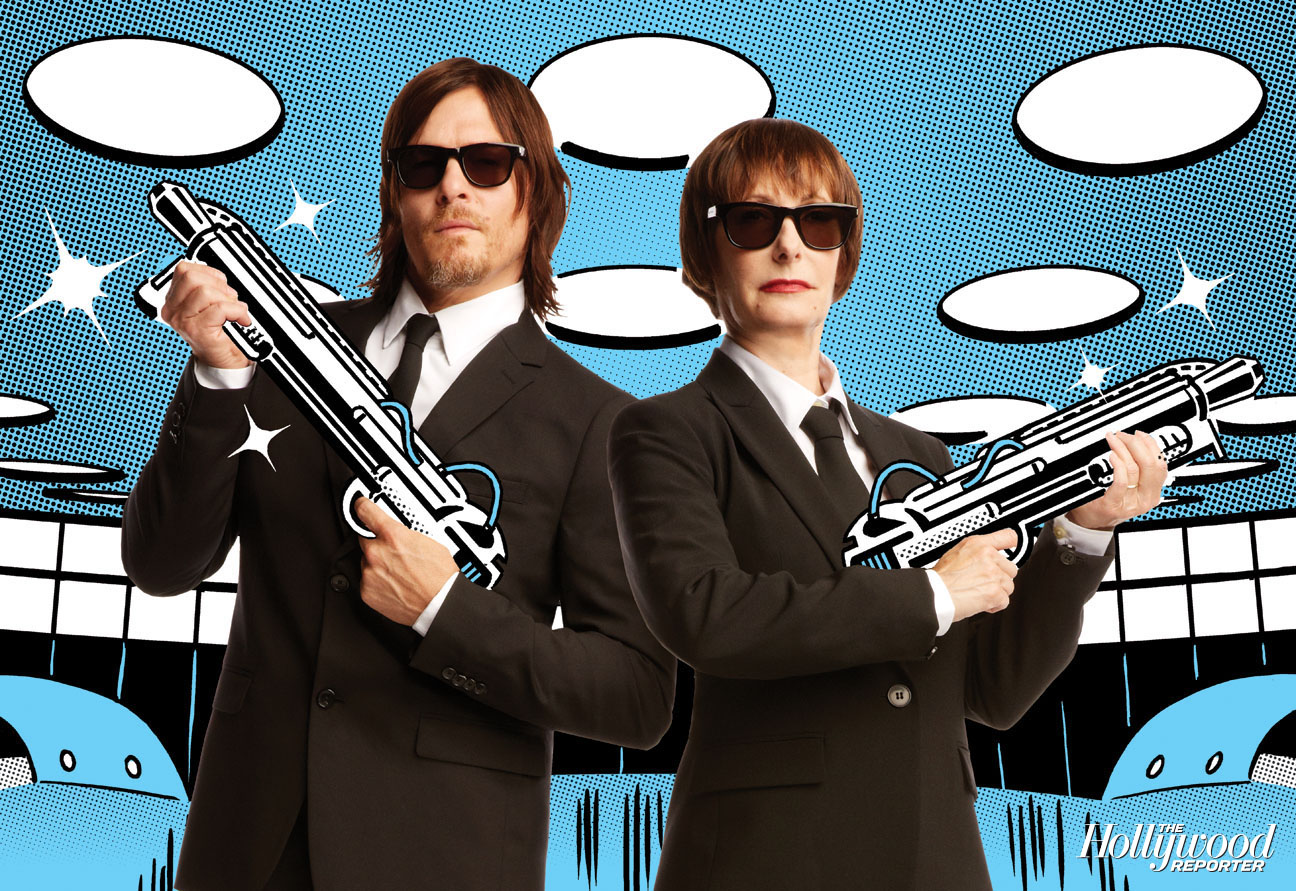 On the sillier side, here’s a pic of Norman Reedus and The Walking Dead executive producer Gale Anne Hurd goofing around in Men in Black costumes for the show.

Finally, Entertainment Weekly also coaxed a story about a story about appearing at a previous con out of Reedus that we’ve included below. I can imagine he’ll only get mobbed worse this year.

“It’s funny, because they know what you’re wearing. So if you just put on a mask, you’ll get caught right away. Steven Yeun and I decided to go walk the floor in San Diego, and he went and got us these square, cardboard box heads to wear. And we walked around with those for like a minute, but you can’t breathe in those things, you could barely see, and someone recognized us right off the bat. So we ducked around to one of those vendors and we just bought what they had. And he went as Spider-Man, I went as the Stay Puft Marshmallow Man. We walked around for a little while, and it was cool. When we came out of there, we went to the hotel and it was so hot that we were just dying in those masks. So finally we pulled them up for a second to just catch some air and we just got bombarded with people. So we got stuck in front of a hotel trying to get out of there. But it was a lot of fun.”