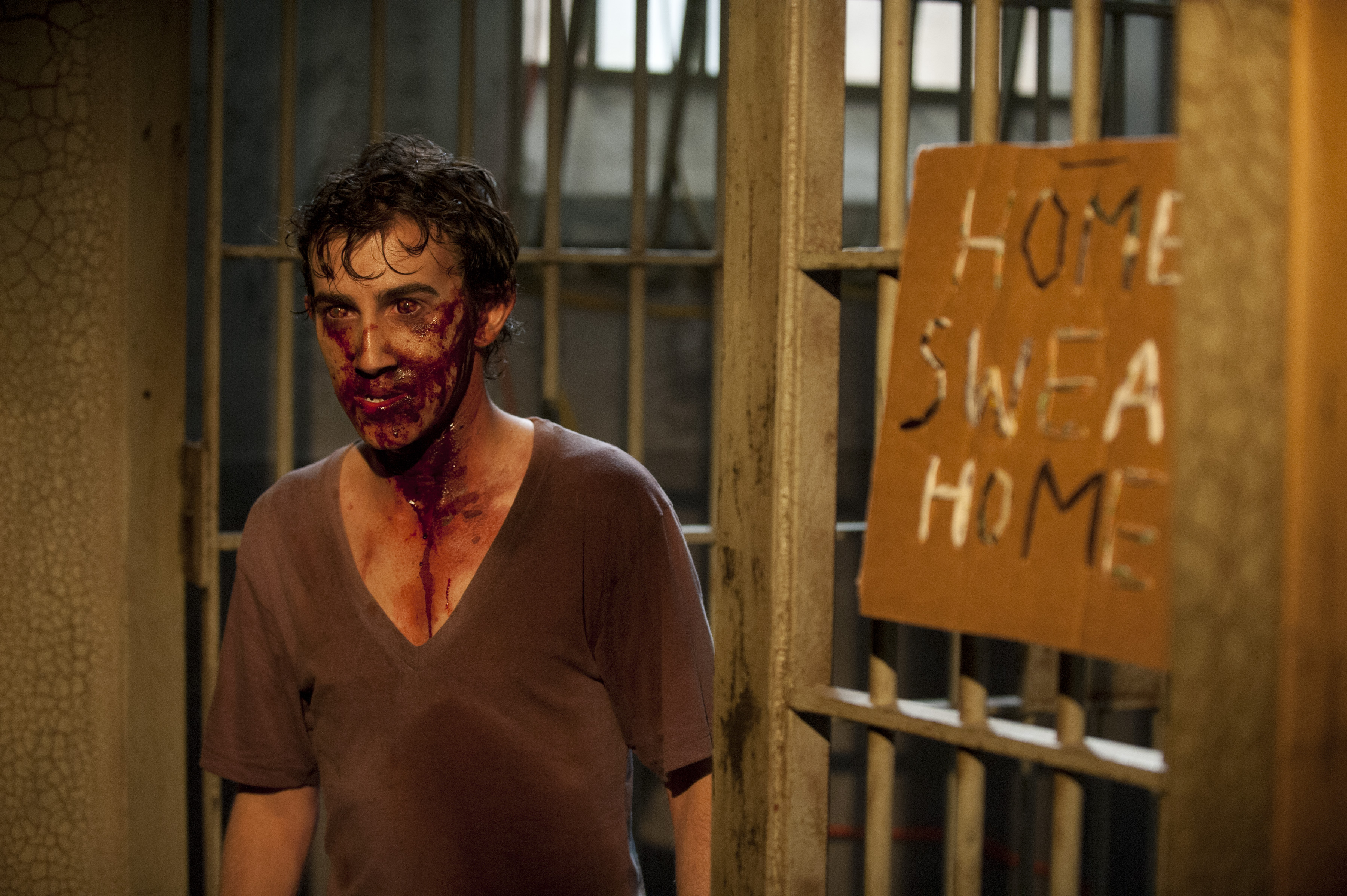 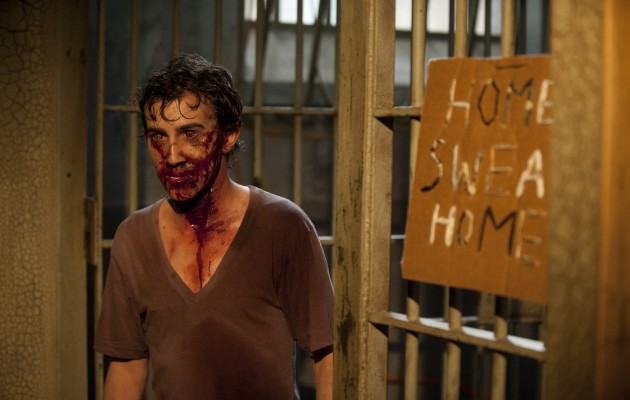 “Infected” kicks off with a scene where an unseen individual shines a flashlight on walkers, dangles a rat in front of them and pushes it through the gaps in the chain-link fence to feed them.

In the prison library, Karen hugs and kisses Tyreese, who admits he can’t forget what happened to Zack. He sings a few bars of a love song to her annoyance, and tells her that he loves her again. He tries to follow her to her cell, but she replies that she isn’t ready yet, and leaves.

As Karen walks through the prison halls, she passes the showers and hears a noise nearby. She passes Patrick, who’s now a zombie, but doesn’t see him. After giving up on finding the source of the noise, she heads back to D Block to sleep in her cell. Soon after, Patrick enters and moves towards Karen’s cell, only to be distracted by coughing a few feet away. He enters the nearby cell and bites the throat of a former Woodbury resident.

After the main titles it’s now morning. Rick is up early with Judith and motions for Carl to wake up and come outside.

Meanwhile in D Block, Patrick is still feasting on the corpse when he is distracted by more coughing, and leaves. Said feasted-upon Woodbury civilian gets up and also moves out out of the cell.

Nearby, in one of the prison guardtower, Glenn is watching Maggie sleep. He pulls out an analog camera and takes a picture of her. The noise wakes her up and she’s somewhat amused to wake up to a camera shutter. Glenn offers to bring Maggie breakfast as she goes on guardtower duty, after he’s done with a perimeter check. Maggie asks Glenn to throw out the picture but Glenn playfully says he won’t.

Rick and Carl meet up with Michonne as she heads out on another scouting run, and she asks if Carl wants her to bring him anything. Soon after, Carl notices the prison fence is swaying. He asks for help and Rick says that they have “other plans”. Rick begins feeding the pigs and Carl apologizes for his behavior. Rick accepts it, but when Carl asks for his gun back Rick ignores the request. Loud noises and cries for help get in Rick’s earshot and he runs inside, instructing Carl to head to Maggie’s guard tower.

Rick finds out there’s walkers in D block, and Sasha tells him that C block next door is clear. They link up with Daryl and some others and make a run for D block.

Outside, Michonne returns from the outside, and Carl opens the gates for her. Unfortunately, that also lets two walkers inside, and Michonne can’t draw her sword in time. She’s able to get one far enough away for Carl to shoot, while Michonne forces the other walker onto a spike but injures herself in the process. Maggie finishes the walker off and helps Michonne inside. Maggie, as she brings Michonne to safety, notices that the other walkers aren’t trying to swarm them, they are instead heading elsewhere . . .

D Block is total chaos. Glenn, Carol, Rick, and Daryl try to rescue as many people as possible while killing the multiplying walkers. One man is bit and survives and Carol drags him into a nearby cell to amputate his arm before he’s fully infected but Carol soon realizes Ryan has been bitten in the neck as well as the arm, meaning he can’t be saved.

Rick orders everyone to search D Block one more time, and Patrick ambushes Glenn, but before Patrick can bite Glenn Daryl is able to shoot Patrick in the head with a crossbow bolt

Ryan realizes there is no saving him. Carol tells him to stay calm. Ryan begs Carol to say goodbye to his daughters for him, but Carol says she will get the children herself so he can say goodbye personally. Rick finds another walker locked up in a cell, a man named Charlie who had locked himself in because he had been sleepwalking. It dawns on the survivors that Charlie died without being bitten.

Ryan’s daughters say goodbye to him, and one of them, Lizzie, offers to kill Ryan before he reawakens as a walker. However, she can’t do it and Carol does it for Lizzie.

Inside the library, the prison council has a meeting. Hershel says that the sickness can be lethal, and wonders if anyone is showing symptoms. Carol thinks that they’ll have to quarantine everyone who could be infected.

Outside, Tyreese is walking with Karen and the council overhears them. They confront Tyreese and he says he’s just bringing Karen back to the cell block. He is told that there is too much risk and now he’ll have to be quarantined with Karen.

Lizzie and her younger sister Mika are mourning outside and Carol meets up with them. Lizzie tries to rationalize what happened and fails, and she doesn’t listen to Carol’s consoling. Mika tells Carol that Lizzie is just messed up, she’s not weak or a coward.

Rick approaches Daryl as Daryl digs the graves for the dead. Daryl says that the community is lucky to have Rick’s skills and leadership. Rick expresses that he doesn’t want to be a leader but Daryl points out that Rick has done some things worthy of a leader. Suddenly, Maggie runs over to them, screaming  for help. The gate is buckling.

Everyone in the area tries to help, but it isn’t much use, the gate definitely looks like it is going to buckle completely and the walkers will get inside.

Unaware what’s going on outside, Michonne is angry with herself, but Beth says what happened wasn’t Michonne’s fault. Judith begins crying and Beth says Judith can sense peoples’ moods pretty well. She hands Judith to Michonne over Michonne’s protests, but Michonne soon smiles and hugs Judith.

The battle at the gate continues. Sasha notices the rat corpses by the gate and realizes that someone is feeding the walkers. Rick comes up with a plan and tells Daryl to get his truck. Daryl and Rick drive outside and Rick opens a box containing piglets, and he cuts the piglets to drive the walkers away from the gate. The walkers devour the piglets, sparing the gate . . . for now.

Later, Lizzie and Mika finally come to terms over Ryan’s death. Meanwhile, nearby, Rick takes down the pig pen as Carl approaches. Rick says that they have to stay away from Judith for fear of being infected. Carl then explains what Carol has been teaching him earlier in the episode, but explains that it’s for the good of the prison. Rick thanks him for sharing, and sets the remnants of the pen on fire before giving Carl back his gun and reloading his own revolver. Rick throws his bloodied shirt into the fire, and looks over the prison gate as the flames rise.

Inside the prison, Tyreese walks inside Karen’s cell with flowers, but discovers blood on the floor. Following the trail, he finds two burned bodies and Karen’s bracelet . . .

Reaction: As someone who read previews of the season, I was not shocked to find out that there’s a disease going around. It makes sense though in both a realistic and narrative fashion, though. In such a cramped quarter, with questionable sanitation no matter how hard you try, the chances of a plague spreading are pretty high. It also looks like it has definitely breached containment.

The cast list is also shrinking pretty rapidly. Now Karen has died, and offscreen to boot, leaving a murder mystery in its wake. It should be pretty interesting to see who did it, but I hope it won’t drag on throughout the season. My guess is that it’s a member of Rick’s group as I don’t see a Woodsbury resident doing the murder. Ryan wasn’t as big of a character as Karen but his  death definitely affects his daughters too. Lizzie is definitely acting weird, and she doesn’t seem able to grasp the situation completely.

I don’t think it’ll be too long before the characters realize that there’s no containing this disease. Everyone has been running everywhere, and that means everyone is potentially infected. There’s a good chance that no one is safe this season.

My interest has definitely been piqued so far. Can’t wait to see what happens next.